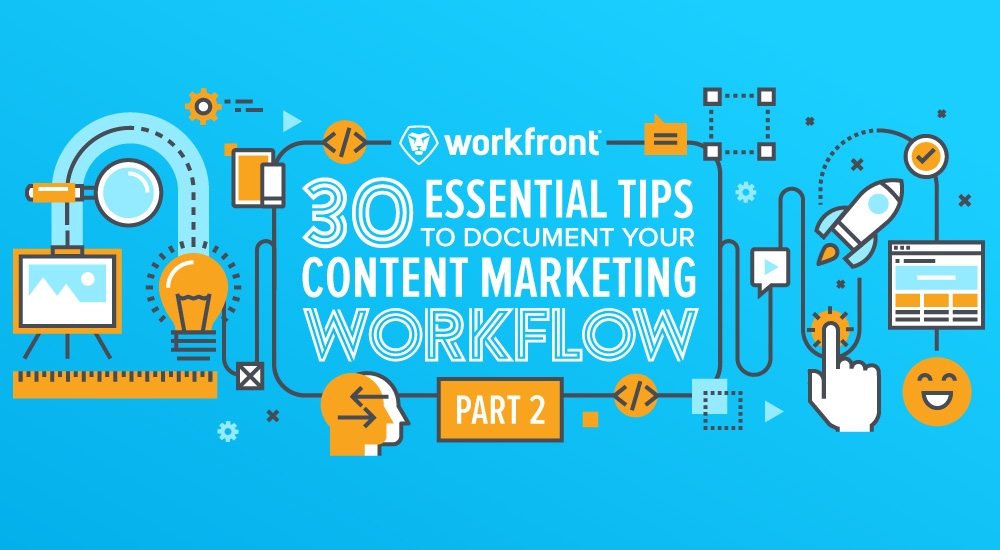 What follows is the second in a three-part recap of the webinar. You can see part one here and part three here. If you want to watch the entire webinar on demand, click here.

That can create kind of a firestorm within organizations. Sometimes it’s the loudest person who tends to get their work put at the top of the priority list, when that’s not at all what’s going to drive the biggest business benefit. So I couldn't agree with you more.

One way that you can filter things more to the top of priorities is to think a little bit bigger around serialization. 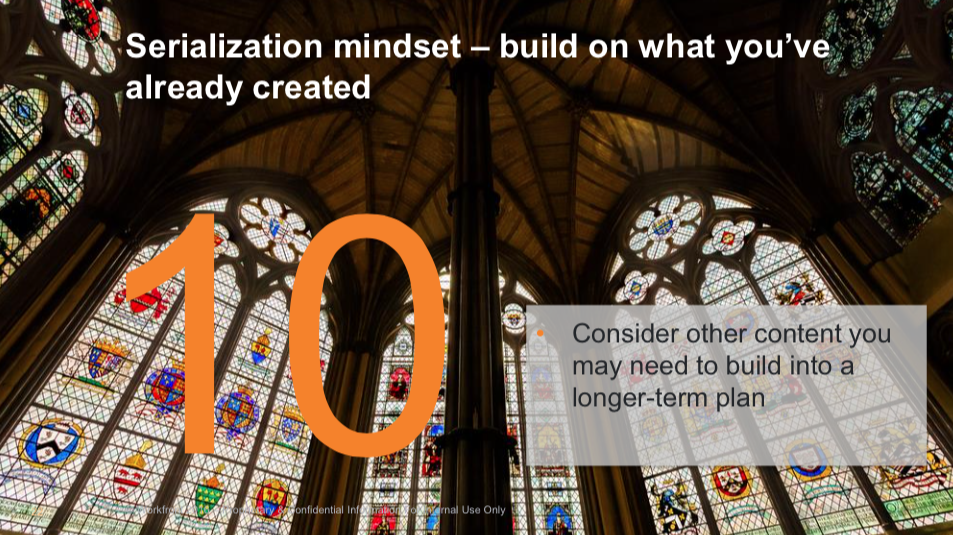 A good example of this is if you’re going to be blogging a lot on a particular topic and if you thought a little bit ahead on those blog posts, could you potentially be writing chapters, loosely used, for an ebook that you could launch at the end of the year that would be a really meaty piece with tons of contributors and really a lot of actionable insights and tips?

That’s something that you’re blogging anyway.

But with just a little more mindfulness about the overall purpose and the potential use down the road of some of that content, it can get you a little bit farther. So just thinking about that ahead of time can really help to simplify your overall content needs.

Matt Heinz: Another way to think about this from a priority standpoint is to think about where you’re going to commit resources to each business need. 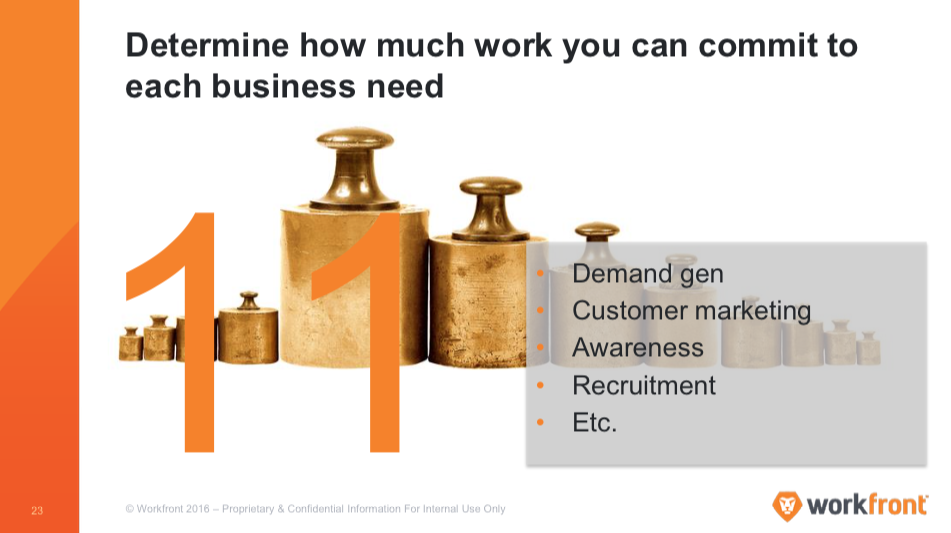 First of all, build an inventory of the different parts of the business that you are going to agree to support.

That doesn’t mean they’re all going to get the same amount of time and attention from you, but it does mean that that becomes the area in which you are focused; the customers you have, if you will, from a content standpoint.

I would then think about how you’re going to roughly break up time and attention on these. This becomes an element of building that priority list and that triage list of what’s going to get done.

If half of your job is to support the demand gen and the sales efforts, then ostensibly half of your time should be against those projects. So, you wouldn’t equally weight projects from demand gen or recruitment, HR, etc.

This becomes a little bit of a nuanced game and it’s not a perfect science in most cases, nor is it going to be.

But I think your ability to at least be aware of what this is and make sure that everybody you’re working with is aware of how you’re breaking that up, that clarity adds a whole lot of efficiency to the process.

Heather Hurst: Building on that a little bit, you break up where you need to allocate your time.

But inevitably you have fire drills that come in, and you have those ad hoc requests that come at you. I’ve talked to content teams where they essentially spend all day just working on those emergency projects and they never really get to their prioritized work.

One key thing is to set in place a rule around fire drills. 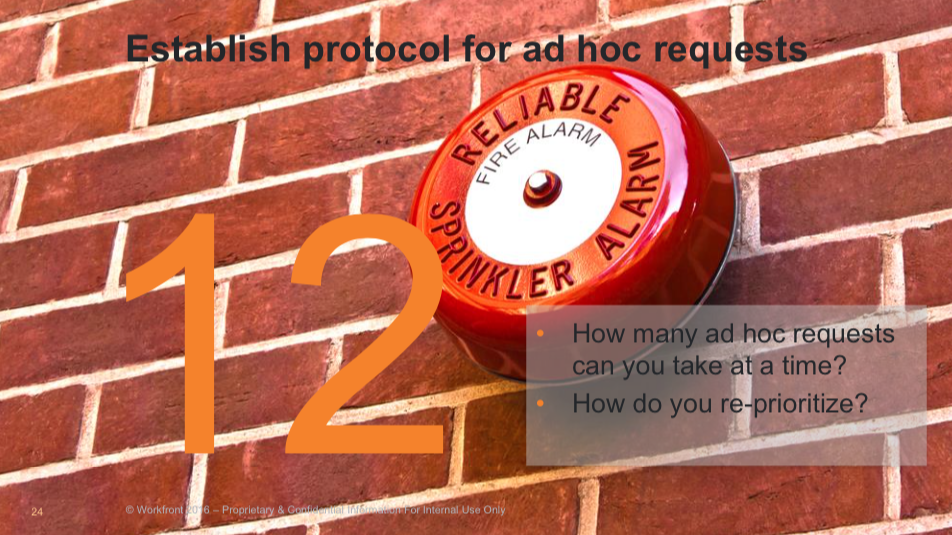 One practice that’s in place with Kanban teams is that they only allow one ad hoc request to be in process at any given time. So there does have to be conversation if two ad hoc requests try to come into the pipeline.

I’m not saying that everybody has that luxury of being able to say, "Sorry, we’re already working on one; we can’t take another one."

But it is all about having a process, having a policy in place that you communicate out to your team.

That will really help to not only reduce those ad hoc requests and get people to think ahead about the content they need to have built, but it’s really going to help your teams to not be driven to burnout.

Matt Heinz: We covered this a little bit already, but the idea that you are documenting how you are prioritizing things, making it really clear what percent of your time you’re spending on one project versus another, letting people know how often do you re-prioritize what’s on the triage list. 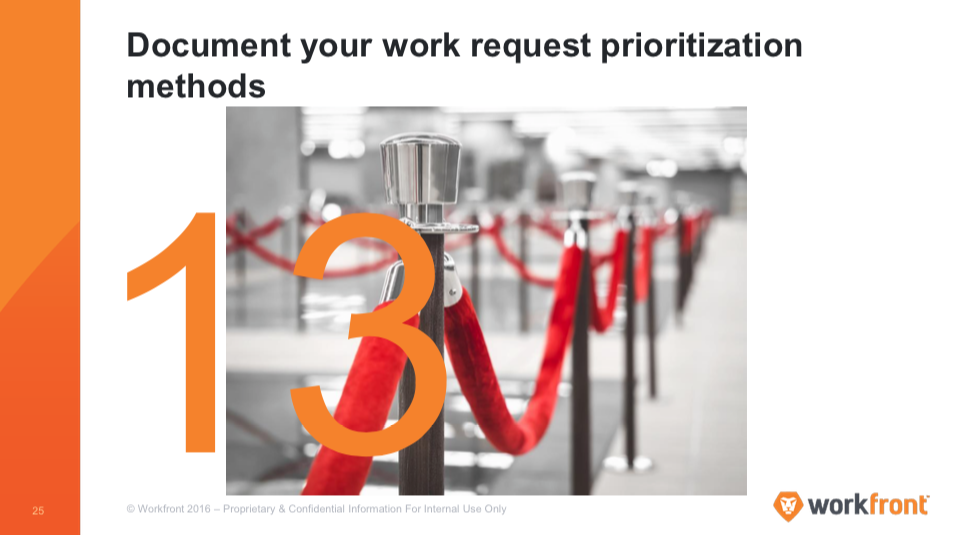 Are there certain projects that really do count as fire drills? I really like what Heather said about making a little bit of a penalty for those who are coming to you with fire drills.

I remember working in a PR agency and we were working with Microsoft. There was a set period of time that the Microsoft review engine, which included legal review and everyone else; that if you had your proverbial stuff together it was an X-day process.

If you needed it done in two days or in one day, there was literally a cost that you had to pay as part of your marketing budget.

So making sure people understand what it costs to have a fire drill, but also what it means to prioritize; again, this may not make everybody happy. But clarity will at least make them understand the rules under which you are executing.

Heather Hurst: I absolutely agree, and that goes to this next one which is how to keep your requesters in the loop. 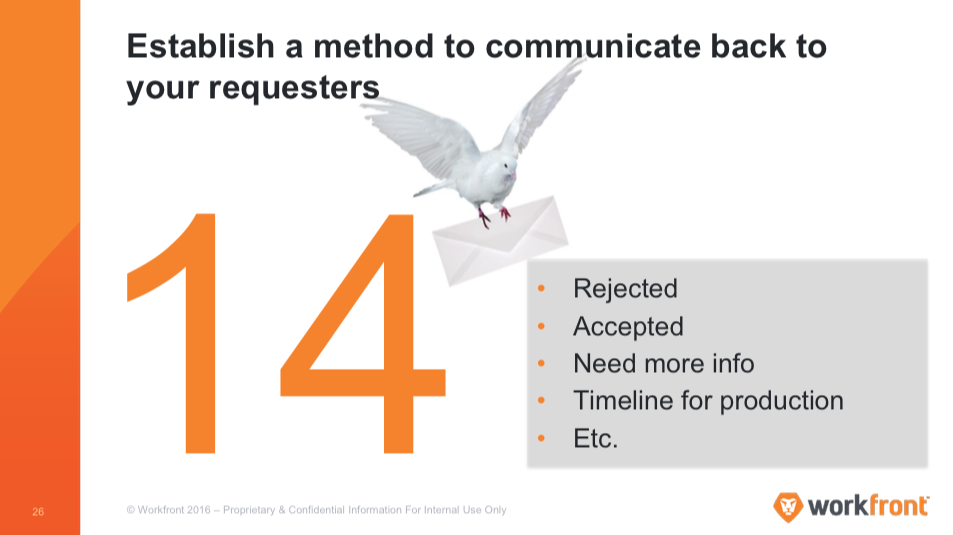 We live in a constant state of interruption now, and the last thing you need is 10 requesters a day IMing you, sending you email, coming to your desk asking what’s going on with something they submitted to you.

Matt Heinz: I want to encourage everyone when you get done with this summit to look yourself in the mirror and get used to saying the word “no.” 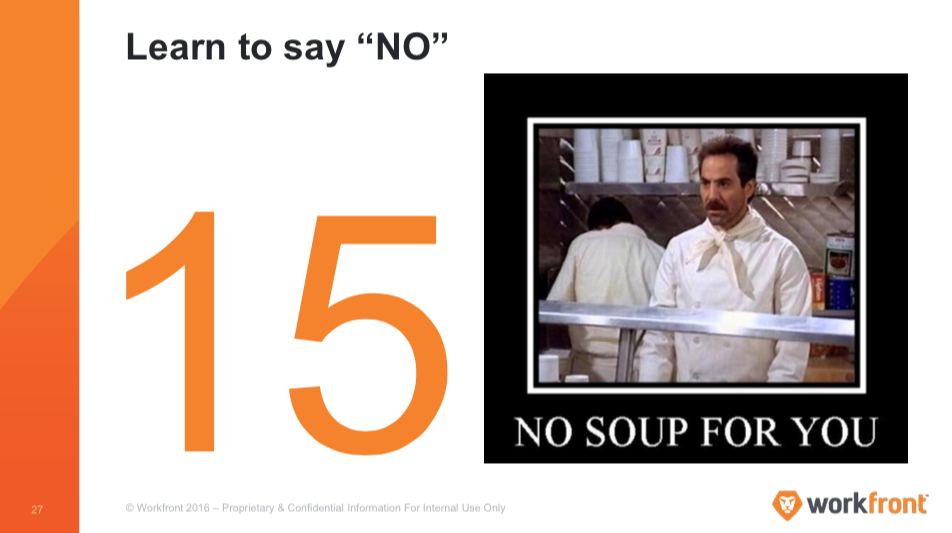 You cannot do everything. Not everything is worth doing.

You could work 24 hours a day and still not get the entire project list done, and I guarantee you it will continue to grow.

I also guarantee if you’re sitting in your chair today and saying, "I don't have enough resources to get stuff done, I need more resources to do my job;" saying "no" will, in many cases, help people see where your guardrails are.

They’ll see where your boundaries are and it makes it easier for people to then say: "Maybe he or she does need more resources to get the right work done."

Heather Hurst: One thing that can really help you with that overall prioritization and knowing if you need to say "no" or not is by understanding how long things actually take to be created.

So think of something really simple like a blog post. You might be thinking that’s a really simple piece of content; you just write some words, and then you find a picture and you publish it.

But there’s actually often a lot more to it.

If you don’t document all of the steps that you go through for content production, analyze based on historical information how long all of those stages take you, and not just in time for you to spend on the work but also in those transitions of you waiting for reviews, waiting for approvals, waiting for a spot to open up on the blog when you can publish; you’re not going to know as well what really is on your plate.

So creating templates around your types of content production, whether it’s writing a press release, or creating an ebook, or making a brochure; if you understand how long all of those take and the stages you go through to create them, it really will help your team to have a much better understanding of what they’ve ultimately signed up for. 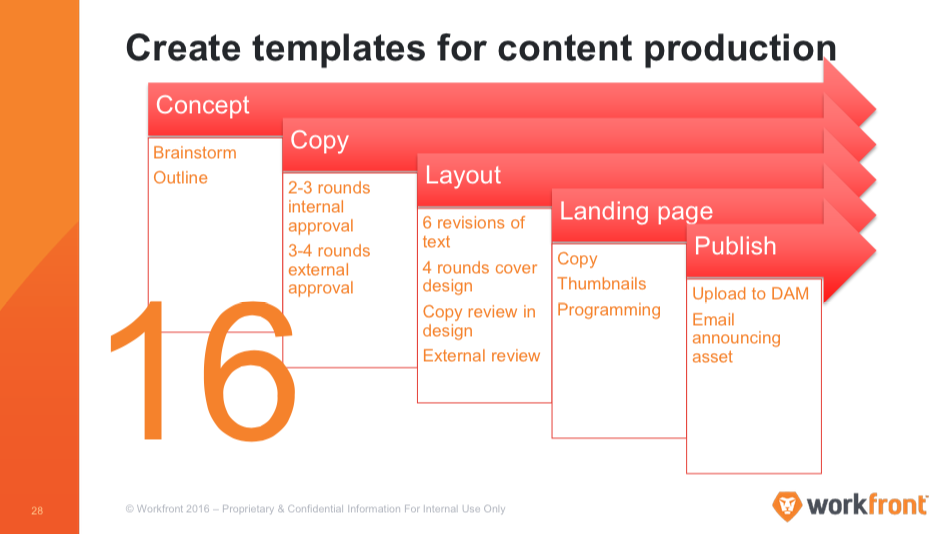 So once you’ve prioritized and you’ve gotten all of your requests, now that brings you into the actual creation of the content. 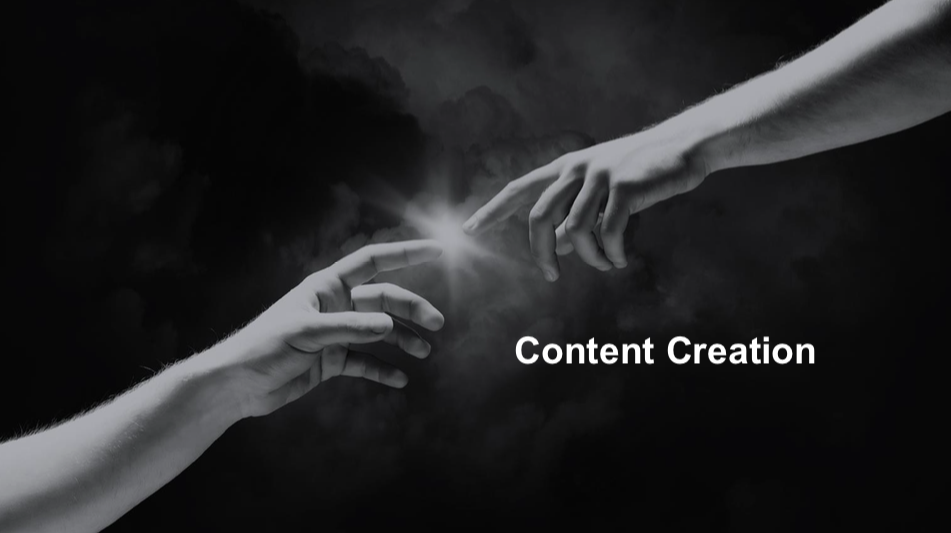 Matt Heinz: Super props to the creative team for all the pictures behind these. Between the memes and the cultural references, it’s just fantastic.

When it comes to content creation at any level of your workflow, the more you can automate what you’re doing—the more you can have robots remind you and keep you on track—the better. 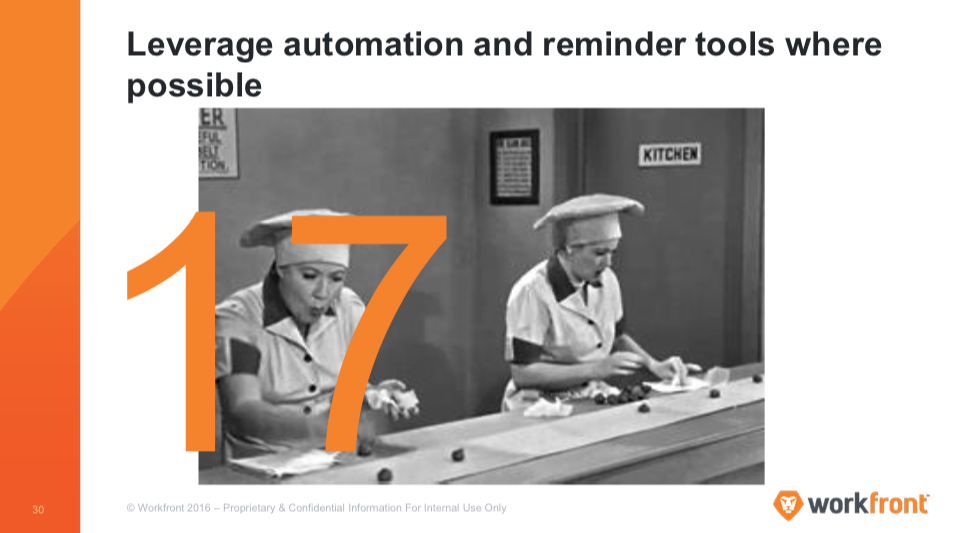 Reminder tools don’t necessarily need to be email reminders or, God help you, the alerts that pop up incessantly on our desktops.

Reminders can also be just a trusted system that you use on a regular basis. I have a daily do list, for example, that I look at every morning.

When I travel, I have a laminated version in my folio that I carry with me. It reminds me of a number of different content creation, content curating tasks that I need to do on a daily basis.

These tools—these automation tools, these reminder tools—can not only help you be more consistent, they can not only save you time, but they can make it so you can get more done.

Heather Hurst: Matt, not to be hung up on this but I’m really going to need a picture of that laminated to-do list, because I am super, duper intrigued by that.

One of the biggest things you can do is decide who you actually need to have involved in the review and approval process. 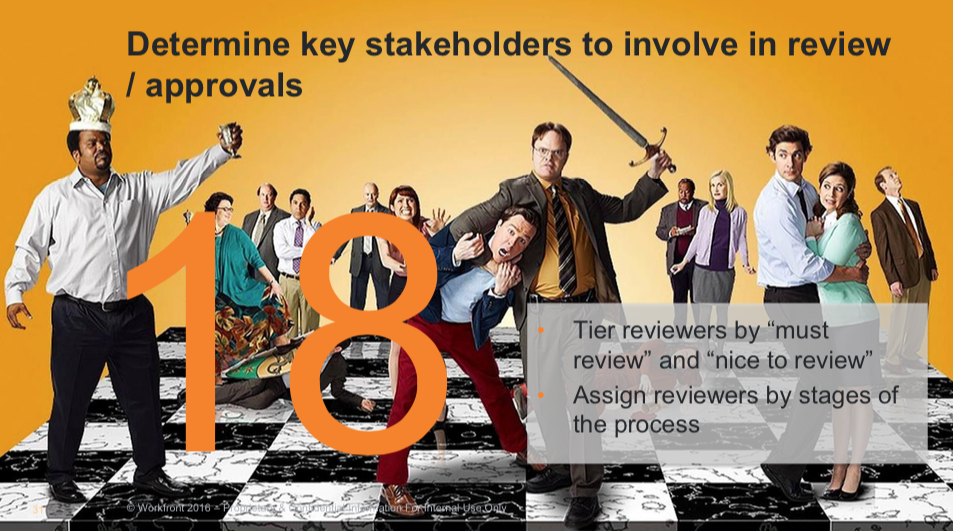 If you’re anything like me throughout my career, when you think about reviews and approvals, you just sort of have this sad feeling lingering in your heart where you know that eventually you’re just going to have to start stalking people and risk having some sort of legal action taken against you at some point in time.

One of the biggest things that can help with that is figuring out exactly which stakeholders need to be involved at which stages, and with what types of content.

Because inevitably, you’re often sending things to people who don’t need to see them. You’re waiting on them, you’re wasting time. And it’s not a priority for them because they probably didn’t actually need to be involved.

So work with your teams to establish which of your stakeholders are the must-review, which can often be your legal department or your CMO, or the author on a ghost-written bylined article, for example.

And then those who it’s nice to have on the review list and if they’re able to see it, great; it’s a nice FYI. But if not, then you’re going to move on without them.

So anyway, somewhat related from an accountability standpoint: because you’ve established a process up front in creating content for other people to review your content, that doesn’t mean they’re going to follow it.

Be really clear about what you expect from people in reviews. 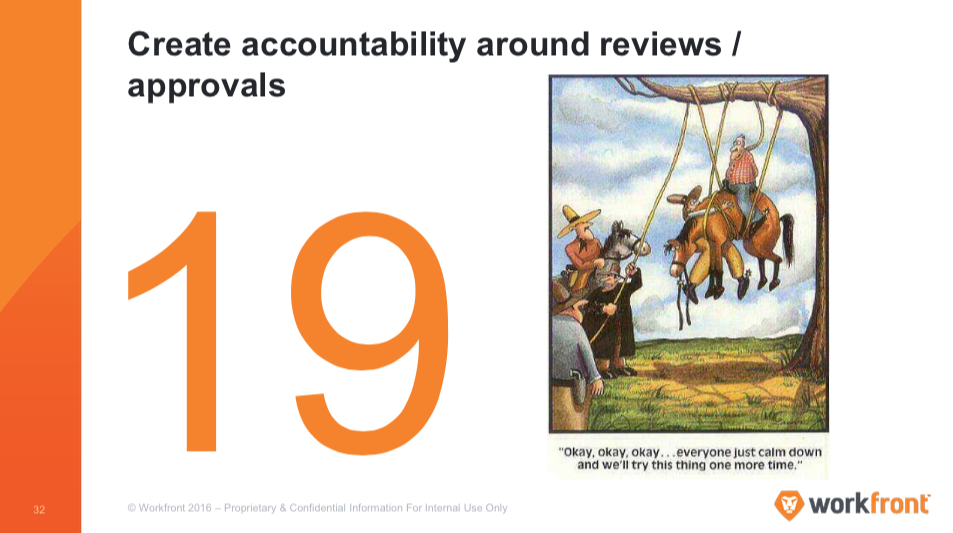 Be really clear about when you need things back. Establish those requirements up front. And without being punitive, make sure that there is some implication if it’s late.

It doesn’t mean that you’re going to say, "Every day it’s late, it’s going to be a day late delivering this document."

Because the impact of that content still needs to be had. But, I would make sure people understand the seriousness of following the process. That it’s tied to results, that it’s tied to the results that they need, that they’re trying to achieve as well.

Heather Hurst: Matt, you covered this really well so I don’t need to belabor it. But I think one of the biggest keys we forget is ongoing communication. 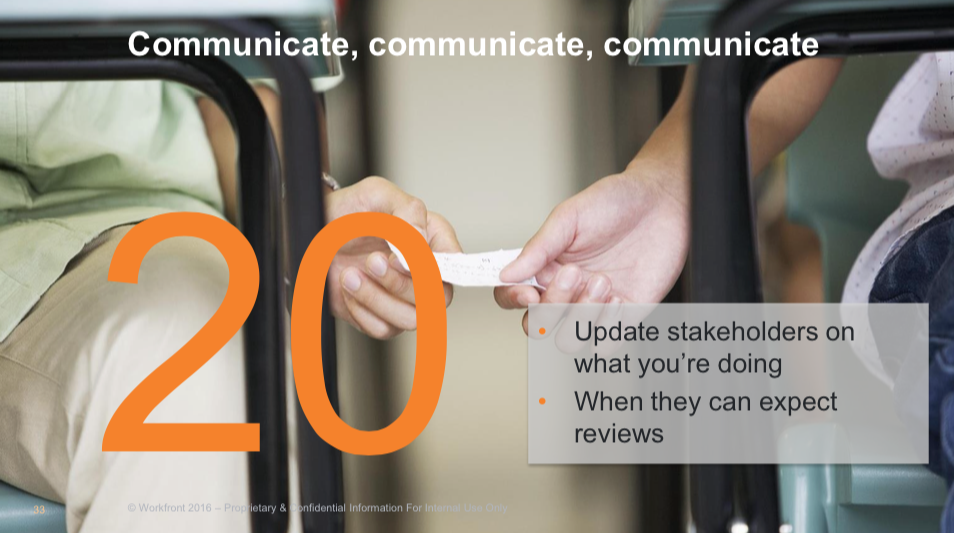 Communication about where a piece of content stands in the process. Communication with a stakeholder about what they can expect coming up in the next week.

Communicating with your stakeholders to see if they’re going on vacation and are going to be off the grid, and it’s not a possibility for you to send them anything for review.

Communicating on an on-going basis is really, really key to keep all of this moving along on a good path.