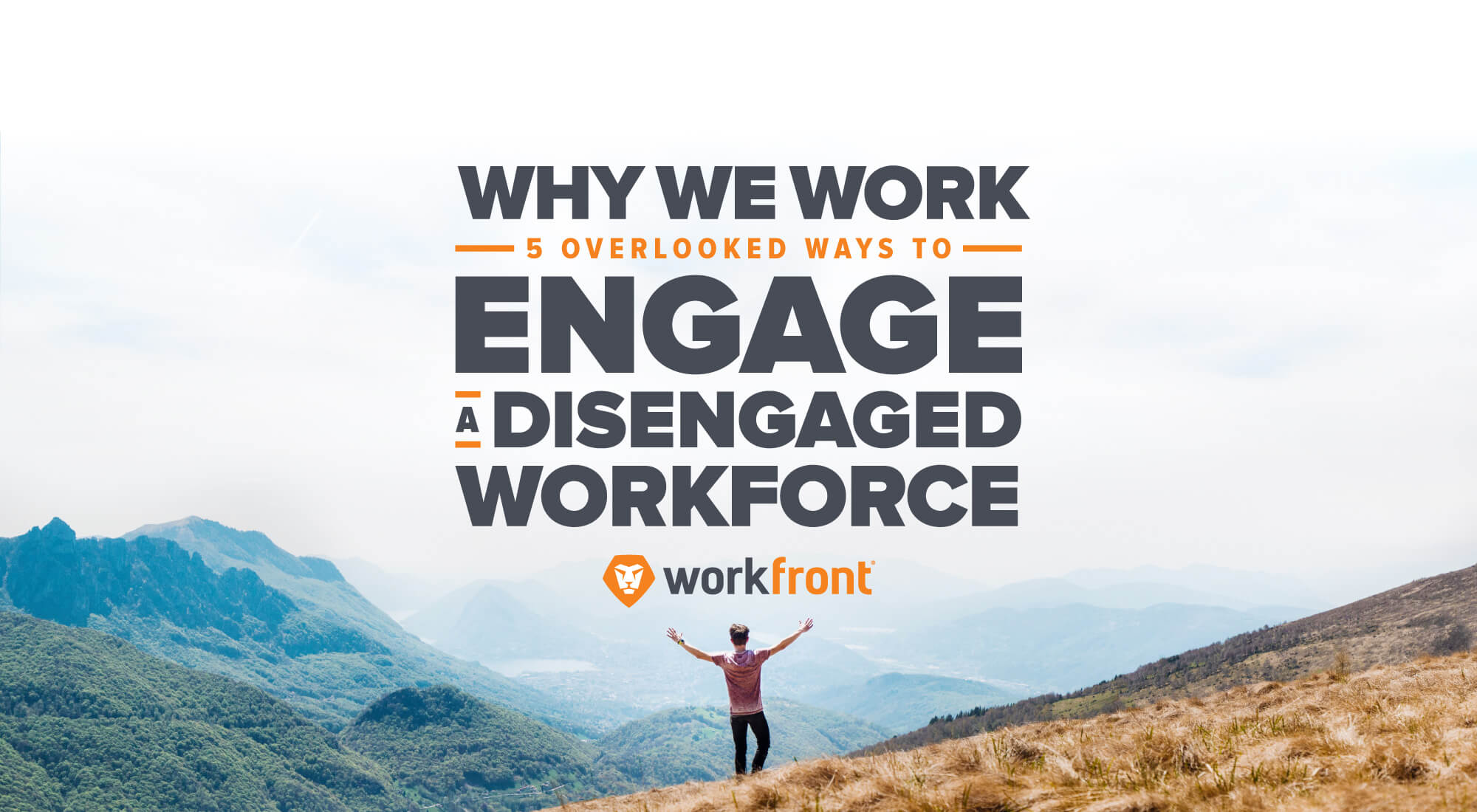 Why We Work: 5 Overlooked Ways to Engage a Disengaged Workforce

Years ago, I worked in an agency for a notoriously picky client.

About eight months into the project, right at the tail end of the original timeline, we were given a request to shift an onscreen design element two pixels to the left. As it so happened, this design element was repeated hundreds of times across the project, which meant it would take around a half dozen hours to fix — a process that was given to an in-house contractor.

About three hours into the process, I remember looking over at the contractor, who had stopped working and was just staring blankly at his screen.

“This doesn’t matter,” he said, slowly. Then he added, “Literally nothing about this matters.”

Something about the emptiness of his stare has stuck with me ever since. I didn’t have a good response for him at the time, and I still don’t. Moving a design element two pixels to the left hundreds of times didn’t matter.

Or maybe it did matter, and the problem was that no one on our team could see why it fit into the ultimate goals of the project.

This story isn’t an isolated incident in the modern workforce.

As proof, Gallup has found that 85% of employees worldwide say they’re either not engaged (67%) or are actively disengaged (18%) at work. 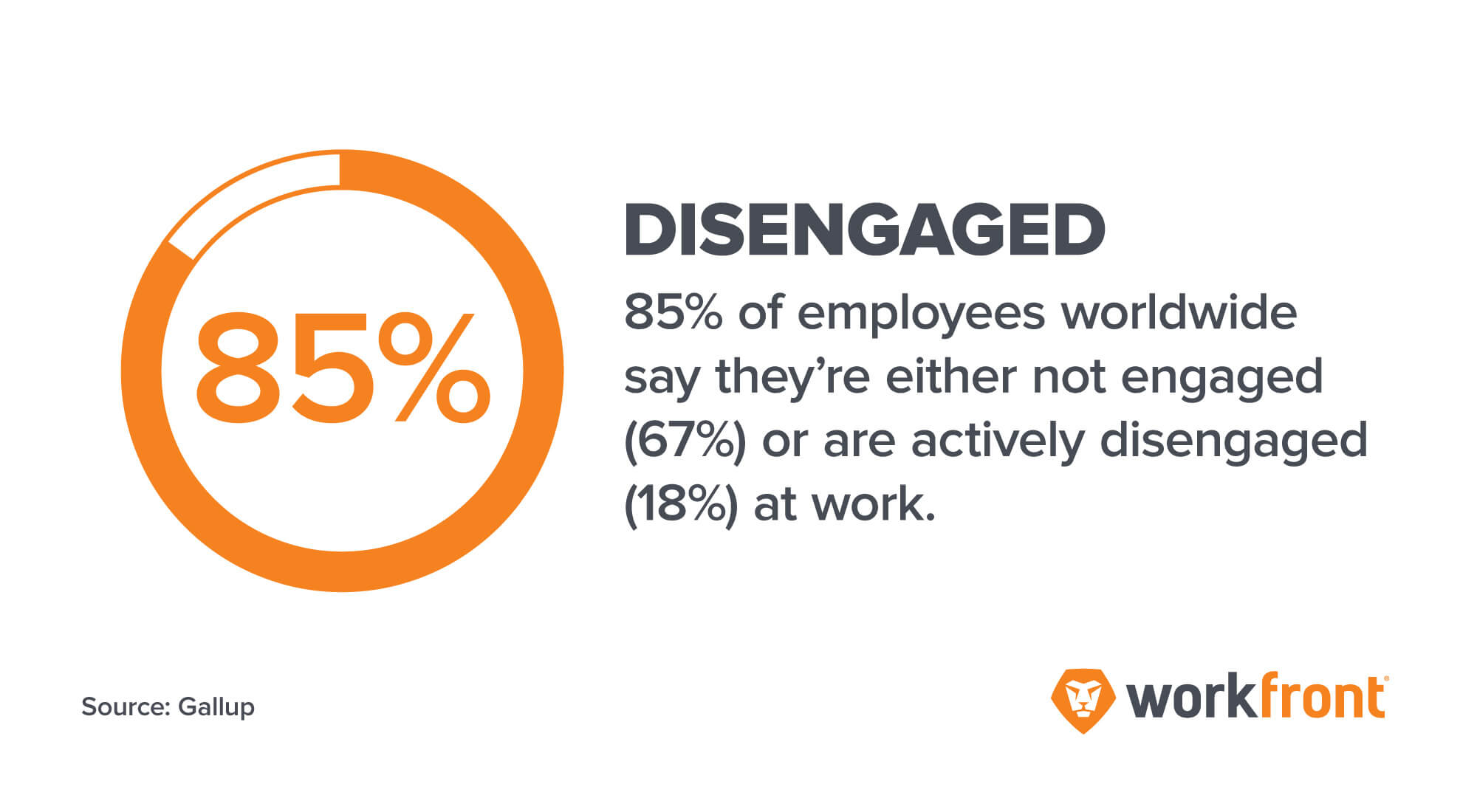 In so many ways, knowledge work today is cushy. We’re protected from the burning sun in the summer and sheltered from the freezing winds in the winter. We don’t have to worry that a storm or a famine could lay waste to months of effort.

And yet it’s often hard to see why modern work matters.

Unlike the past, where human labor was almost always self-evident (e.g., hunt an animal and feed your family for a night, plant a field in spring and have food for the winter), it can be difficult today to draw a clear connection between effort and purpose.

Think of the implications here. When employees trudge in and trudge out day after day, they’re looking for ways to cut back rather than lean in. They do what they have to do to get by. Nothing more. By contrast, engaged employees invent new ideas, take risks, and lead companies to stand out in a competitive marketplace. This doesn’t necessarily mean these employees love their jobs as much as they love their hobbies or leisure time, but it does mean they’re willing to put genuine effort into what they do. They care about the outcome of the company and produce work they’re proud of. As a result, they increase the bottom line.

In this post, we’ll look at 5 ways you can renew a sense of purpose within your organization.

1. Say no more often than yes.

When Steve Jobs returned to Apple after his stint at Next, he dramatically narrowed the number of products Apple was making from dozens down to four: a professional and consumer laptop, plus a professional and consumer desktop. That’s it. “I’m actually as proud of the things we haven’t done as the things I have done,” he said at the time. Then he added, “Innovation is saying no to 1,000 things.”

By saying no to 1,000 things, Jobs brought a renewed sense of purpose to Apple. No one at the company was working on non-essential or second-class products, and so 100% of the company projects were focused on the things that mattered most.

Going back to the story I opened this post with, the contractor likely wouldn’t have quit his job if our team had just told the client no. What’s more, if the client fully understood how much their request would cost us in time, they likely would have been understanding — especially if we’d showed them that we could accomplish several higher priority items instead. Not saying no hurt everyone involved in the project.

It’s become a cliche across Silicon Valley for companies to boldly claim that they’re changing the world, regardless of what they build. Fitness apps, photo editors, recipes blogs — it’s all changing the world.

In some sense, it’s true. Everything we build or create changes the world to some degree.
However, when every company lends a sense of vague grandiosity to their mission statements, it can cloud the actual purpose of a company and end up creating a disconnect between employees and the mission.

Instead, it’s better to be exact about what you offer the world, even if it seems meager at first blush. To do this, you might ask employees to think of what pain points a person would experience in their lives if your company didn’t exist. What would be more difficult? What would take more time? What would be the cost?

If your employees can accurately comprehend how your company plays a particular role in changing the world (within the ecosystem of companies across the world), they’ll be more likely to fully get behind your purpose — so long as they can see how their projects tie to that purpose. They understand that your company doesn’t need to be everything to everyone. It can do a few things really well and be sufficient.

Case studies aren’t only essential for prospects looking into your company. They’re also essential for employees, since they can bring a renewed sense of purpose to your team members, who need to hear success stories often in order to see why their work matters. Without these success stories, team members may have a hard time seeing how their work connects to the real world.

In this same vein, you might ask customers to speak at some of your internal events so they can talk about how your work has improved their lives. As your employees see customers in person, the abstract nature of digital work can be made real.

Just be sure that each case study is authentic and that the data is exact. Your prospects might not be able to immediately discern hyperbole, but your employees will — and hyperbole will hurt morale and spark distrust.

4. Find a way to view your entire team’s workload.

Just as you need a customer relationship manager (CRM) to manage progress with current and prospective customers and a content management system (CMS) to manage the content you produce, you also need an operational system of record (OSR) to manage and view your entire team’s workload.

This operational system of record (OSR) gives you a way to see which tasks matter most and which aren’t essential. Without an OSR, you’ll be a slave to whatever’s most urgent — whatever you’re being asked to focus on at that moment. But what’s urgent doesn’t always map to what matters most, and what matters most will bring the greatest sense of purpose.

In addition, it’s often only when you see your entire team’s task list that you’re able to discern that certain items should be cut altogether. Without such a view, every task can sometimes feel equally crucial. That’s not a good spot to be in.

In every case, the researchers offered money to the participants for completing the task, with the caveat that each completed page would be worth less monetarily than the previous one.

In other words, not acknowledging the work of the participants had nearly the same effect as shredding their work right in front of them.

As Dan Ariely says, there is bad news and good news here. The bad news is that people don’t respond well when their work is ignored. The good news is that it’s really easy to acknowledge work. After all, the researchers didn’t express praise for the work in the first group. They just made sure that the participant knew their work was being seen — that there was some form of accountability.

A simple acknowledgment can go a long way.