A History of Agile Marketing, and What's Next

A scant four years ago (June 11, 2012, to be exact), an intrepid band of forward thinkers met to formulate a document that would guide the future of modern marketing.

Known as Sprint Zero, this two-day gathering of marketing luminaries discussed the emerging concept of agile marketing. Their goal was to establish a shared understanding of core values and principles, as well as to illuminate a path to future evangelism around the movement.

The main result of their 48-hour intensive meetings was the insightful Agile Marketing Manifesto, a thorough consolidation of multiple previous ideas, that is still the gold standard for what agile marketing really means.

Sprint Zero recently celebrated its fourth anniversary, so this seems like an ideal time to take a glance backward at the work of these clever folks and the early days of the movement that they kicked off.

Sprint Zero is the very first iteration that a new agile team works on, but it typically doesn’t include much “real” work.

Instead, it lays down a foundation that sets the team up for future success.

The ScrumAlliance suggests that “a typical Sprint Zero may have activities such as understanding the goals and objectives of the project, resource onboard, environment set-up, feasibility study of the project using the Agile framework, etc. Sprint Zero will help the teams test the waters.”

That final componenttesting the waterswasn’t a stated objective of agile marketing’s Sprint Zero, but I think that was one highly useful by-product of the meeting.

The old Eventbrite description for Sprint Zero is still around, and it includes this description of the event:

SprintZero is a one-day free event that will bring together marketers who are passionate about Agile and incorporating it into their marketing practices. Our goal is to share, collaborate and discuss the latest best practices and operating principles of agile marketing. We also hope to explore how we can spread the word about the benefits of Agile for marketers.

A little over 20 people gathered in San Francisco to spend two days geeking out over agile marketing, presenting their ideas, successes, and failures with their fellow practitioners. 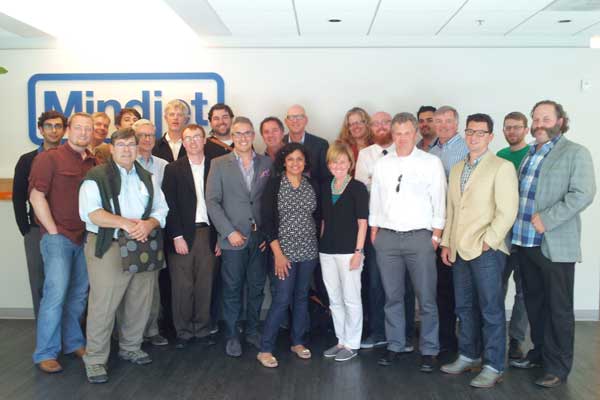 As I mentioned, the primary document that emerged from the gather was the Agile Marketing Manifesto. But it also sparked dozens of articles and blog posts, lending fuel to the steadily growing fire around the idea of changing marketing into an agile profession.

Prior to the end of Sprint Zero, there were many different people putting forward their own versions and visions of an Agile Marketing Manifesto. Travis Arnold has a fascinating roundup still available on his site, and happily the majority of these “historical” documents are still live out on the Internet.

If you start running down the rabbit hole of links in these various posts, it becomes clear that there was a lot of buzz around agile marketing in 2011/2012, but people had also been writing about it for years before that.

In a 2009 interview with John Cass, for example, Jascha Kaykas-Wolff was arguing that, “Today, successful marketing is about experimentation. As marketers, it’s our responsibility to build a process-driven foundation for constantly adapting and improving our ideas in order for them to consistently produce the results our organizations require.”

The groundswell of discussion during 2011 and 2012 was vibrant and important, but it was also creating a very wide variety of manifestos.

Which one was “right”? What about the ones that seemed contradictory? How could agile marketing become a mature movement if we couldn’t get past arguing about the values that should guide it?

By 2012, it was clear that if agile marketing was going to become a real movement, it needed a single point of reference. This, then, was the primary (and seriously lofty) goal of Sprint Zero.

Managing a Manifesto: Creating the Source of Agile Marketing Truth

Agile software development produced their own Agile Manifesto back in the early days of the 21st Century, and it was a catalyst for the solidification of that movement.

Similarly, 2012’s Agile Marketing Manifesto has done a lot to circle the wagons around a central idea of what agility in marketing actually means. Although you still see quite a lot of, “What is Agile Marketing?” articles popping up, there are nearly as many on more specific, tactical topics. 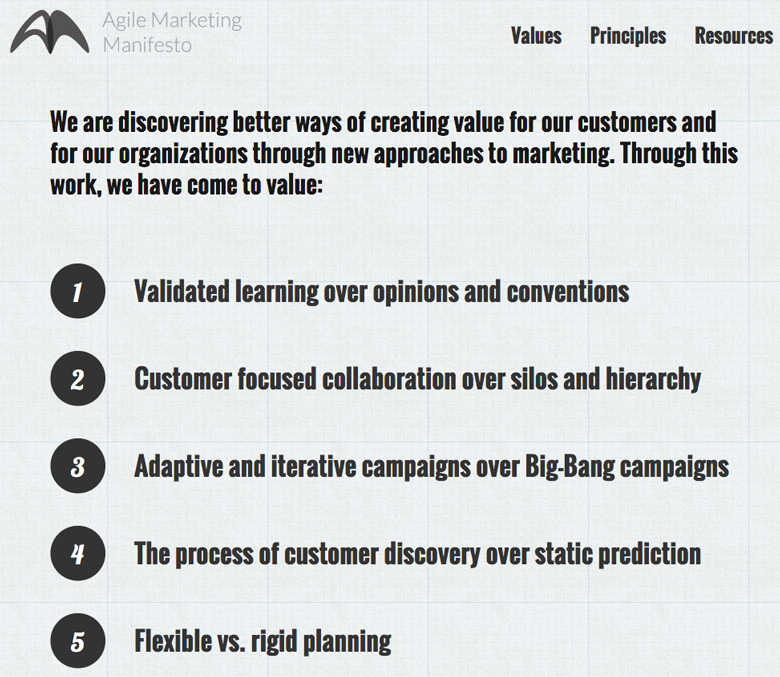 By taking the time to get a group consensus around what values should inform the agile marketing movement, the members of Sprint Zero drove us into the next phase of the agile revolution.

The Post-Manifesto Years of Agile Marketing

Nonetheless, I’ve had many people ask me why agile marketing hasn’t caught on like wildfire.

If this is such a great idea, the argument goes, then why the heck isn’t everybody and their dog doing it?

The answers, in my opinion, lie in marketing as a profession.

Its historical position within organizations has marginalized and silenced many marketing teams, forcing them to claw their way back to into the conversation in recent years. It’s hard to fight for a voice while simultaneously learning a new agile language.

On the flip side is the nature of marketers as individual professionals. “Old school” marketers à la Don Draper were simply a different breed of worker than their modern counterparts.

Consider the number of marketers who were in the midst of their careers during the advent of digital marketing, and it’s easy to understand how simply keeping up with the breakneck pace of change has eclipsed other forms of professional evolution.

Then, of course, there’s the 24/7 nature of marketing work to contend with.

In a nutshell, the agile marketers who left Sprint Zero full of revolutionary zeal were fighting an uphill battle.

Four years after Sprint Zero, 43% of marketers reported in a recent survey that their team, “doesn’t know what agile is or how it works.” That makes over half of us that are at least aware of agility and it’s potential, but we’re by no means approaching total marketing adoption.

We may not have comparable data for 2012, but it’s a fairly easy thought experiment to imagine how much lower the number of marketers who were aware of agile methodologies must have been at that point.

Right after the conclusion of Sprint Zero, Nicholas Muldoon reflected on the day’s implications.

Even back in 2012, he felt that the discussions of testing ideas and validating hypotheses were, “reactionary and that marketing teams are on the back foot. Product teams are turning into customer teams and doing this today. Marketing is playing catch-up and risks being left out of the decision making process.”

Basically, in the race for relevancy, marketing was already getting lapped by other teams within our organizations. Product teams, project management, and certainly developers—they all had a big head start on marketers.

The members of Sprint Zero knew what they were doing, and agile marketing couldn’t have gotten to where it is today without that meeting, but there was still A LOT of catching up to do even after the manifesto had been created.

Fortunately (or unfortunately for those unprepared to tackle an agile transformation), the nature of consumer behavior in the digital age is changing the game.

What Scott Brinker calls “digital dynamics” are constantly impacting the way we do marketing.

In his excellent book Hacking Marketing, Brinker argues that we’re living in a time of “accelerating tempo and growing complexity” that demands the use of agile management.

The only alternative is irrelevancy and failure.

What’s Next: Building on the Manifesto with Methodologies

It seems that work begun at Sprint Zero is at last beginning to mature. Sure, it would have been nice if marketing had heeded the call before it was a matter of marketing life or death, but late agility is still better than no agility at all.

During his preparation for marketing’s Sprint Zero, Jim Ewel reflected on the importance of software’s manifesto when combined with the real-world components of practiced agility:

“[T]he manifesto is the visible tip of the iceberg, but without the remainder of the iceberg, the principles and the methodologies of Agile Development, it would never have had such a big impact.”

I love this visual. After all, the real power of the manifesto and its values lies in real-world application, the largest, yet often the least visible portion of the agile iceberg.

We have Sprint Zero and its attendees to thank for a manifesto that we can rally around. Now let’s usher in the next phase of the agile marketing revolution by creating visibility around the actual agile practices that it empowers.

Does your team use agile principles to organize your work? Are you one of the pioneers of agile marketing? Or are you on the other side of the face, unsure about the resources or learning curve an agile transition might require? Tell us in the comments below!

How are marketers using work methodologies, like Agile, to organize their work? Download Workfront's new Agile Marketing Report to find out.