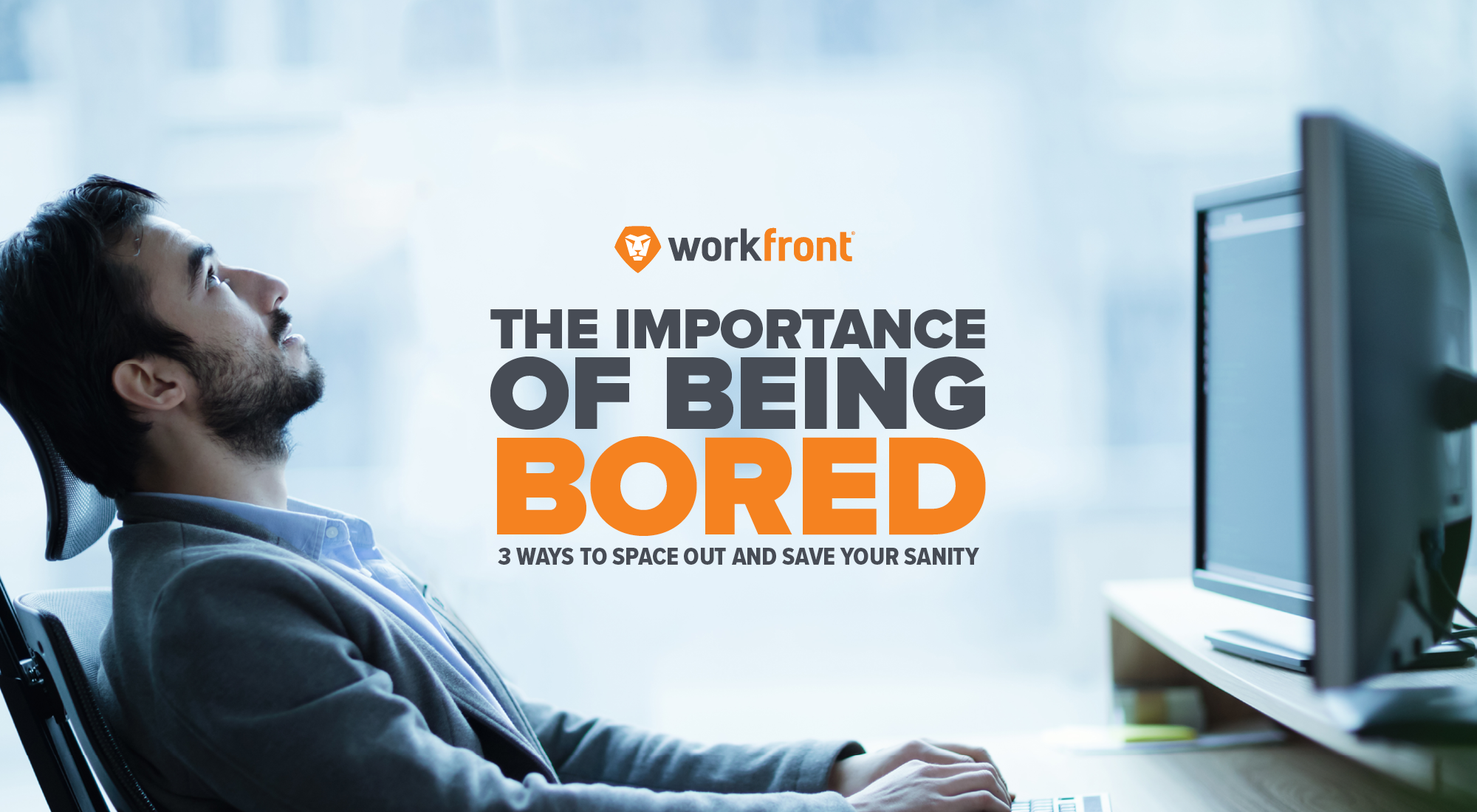 Victor Frankl was a Holocaust survivor and therapist whose book Man’s Search for Meaning has been required reading for generations of high school students since its publication in the 1940s.

He wrestled with the idea of boredom.

Specifically, Frankl took issue with the words of German philosopher Arthur Schopenhauer, who wrote that “mankind was apparently doomed to vacillate between the two extremities of distress and boredom."

To Frankl, boredom was causing “more problems to solve than distress," and he believed this would be increasingly true given the rise of automation. “Progressive automation,” Frankl wrote, “will probably lead to an enormous increase in the leisure hours available to the average worker. The pity of it is that many of these will not know what to do with all their newly acquired free time.”

Frankl was absolutely correct in one sense: progressive automation has changed life as we know it, and it’s going to continue to impact our culture in ways we can’t yet imagine, especially as digital automation and artificial intelligence continue to accelerate.

But that part about the enormous increase in the leisure hours? That doesn’t feel very true in my life. The 40-hour work week, which became a US law in 1940, is still in place today.

It turns out that at least so far, automation hasn’t replaced our jobs as much as it has changed the way we work and the amount of work we’re able to accomplish as individuals, teams, and entire organizations. In many cases, automation has meant that we’re working more, or at least more often, as we check our email and smartphones at all times of the day and night.

I don’t know about you, but the digital transformation has also eliminated boredom from my life almost entirely. (Thanks a lot, Internet!) And it turns out that might not be a good thing.

The Benefits of Boredom

Chances are, all of us said these words when we were children. As a parent, I definitely hear them more often than I’d like. But guess what? A little bit of boredom is the best gift you can give to children — and to yourself.

Psychologists say boredom helps children develop self-reliance, figure out what they’re interested in, motivate them to get things done, and spur creative thinking. Those all sound like traits most adults I know could use a bigger helping of, especially in the workplace.

In a recent article for FastCompany, author Manoush Zomorodi shared the results of a study completed by the University of Central Lancashire. One group of participants was asked to copy numbers out of the phone book for 20 minutes and then brainstorm creative uses for two paper cups. Another group was given an even more boring task — reading phone numbers aloud — before the brainstorm exercise. Guess which group was more creative and original? Yep, the second group, who suggested using the cups to make earrings, telephones, musical instruments, and Madonna cone bras circa 1990.

Inspired by these findings, Zomorodi crowd-sourced a boredom experiment with his 20,000 podcast listeners. Here’s what he found:

“After just a week of igniting boredom, participants did manage to jump-start their creativity. We heard from people who thought of ways to start a difficult conversation with a coworker, came up with new business plans, or simply decided to spend more time thinking than immersed in Facebook. Some described taking up classic creative endeavors like poetry or songwriting, and several had culinary breakthroughs–like inventive ways to sneak vegetables into a finicky toddler’s dinner.”

Why is this? As Texas A&M University psychologist Heather Lench says, “Boredom becomes a seeking state. What you’re doing now is not satisfying. So you’re seeking, you’re engaged.” From this place of seeking (rather than satisfied, mindless distraction) comes creativity.

How to Be Bored

So we’ve seen hints that being bored is good for us and that we theoretically should have more leisure time available to engage in boredom. Given the culture of distraction that we all inhabit these days, how on earth do we find the time to be bored? Here are a few ideas.

In the trendy open-office plans of today, there’s a temptation to always appear to be busy. After all, everyone’s eyes are on us. But the itch to be constantly reading, typing, taking in information, or sharing a status can be counterproductive. If we’re in a constant state of stimulation, there’s no time for our minds to wander, to wonder, or to make creative connections. So the next time you feel overwhelmed or over-stimulated at the office, try staring into space for a few minutes. Look out the window. Gaze at the wall. Breathe. Just sit there and exist.

You might be thinking, “What if my boss sees me spacing out?” Well, that’s where automation and work management tools comes in. These tools provide an unassailable record of where your work stands at any given moment. If both you and your boss are confident that your projects are on track, no one should fault you for unending busyness. In fact, your example might even catch on.

In 1930, the philosopher Bertrand Russell said, “Too much travel, too much variety of impressions, are not good for the young, and cause them as they grow up to become incapable of enduring fruitful monotony.” A bit more fruitful monotony could be just what today’s distraction-prone knowledge workers need.

2. Build in a Boredom Block

I’m intrigued by a suggestion in Brian Moran and Michael Lennington’s book The 12-Week Year to schedule two 3-hour blocks in your week. The first is a “strategic block” of uninterrupted time to focus on strategic, preplanned, and money-making activities. These are the most valuable 3 hours of your week, where you can make real progress on extraordinary goals and key initiatives.

The second is a “breakout block,” which should be free from any work-related activities and thoughts. This is time scheduled away from the office during normal business hours, where you deliberately refresh and reinvigorate so that when you return to work you can focus more effectively. For the purposes of this blog post, I’m going to rename this a “boredom block.” Get out of the office. Put away the digital devices. Go on a walk or to a museum. Expose yourself to a new environment. People watch. Sit and think. Get bored!

“One of the key factors contributing to performance plateaus is the absence of free time,” write the authors. “So often entrepreneurs and professionals get caught up in working longer and harder. This approach is an energy and enthusiasm killer. In order to achieve greater results what’s necessary is not more hours, on the contrary, it is more free time.”

That’s an idea I can get behind.

It turns out multi-tasking isn’t a thing. It never was. A better term is “task switching,” since studies show that our brains can only perform one cognitive task at a time. We are more capable of performing a physical and mental task simultaneously, but even something as simple as walking while talking on the phone can cause us not to notice a clown riding by on a unicycle, according to one experiment. And who would want to miss that?

Tasks take longer when we switch between them than if we complete them one at a time. We make more errors. And if the tasks are complex, these effects are magnified. Even if each task switch takes only 1/10th of a second, it can add up to a 40% loss in productivity.

Even if we don’t mean to multi-task, desktop and phone notifications alert us throughout the day, pulling us into Slack, or our email inbox, and away from the work at hand. This may be why most of us feel busier than ever, even though we technically aren’t, according to a Nature article that compared time diaries from the 1960s to today.

“Constantly trying to do two things at once means you can feel pulled in multiple directions,” writes time-management expert Laura Vanderkam. “You can be working a regular 40-hour-per-week job, and check work email five times at night while eating dinner or watching TV. At just two minutes at a pop, that adds a mere 10 minutes of work, but can pollute whole hours.”

The key to feeling less busy and inviting in more time to be bored may be as simple as shutting down the multi-tasking. An operational system of record can help immensely in this endeavor, since it combines the functions of up to a dozen different tools into one, meaning you won’t spend as much of your day toggling between email, spreadsheets, time tracking apps, and other tools. “Make the distractions less distracting and time will feel just like it always has,” Vanderkam concludes.

Bring on the Boredom

These are just a few simple ways to reconnect with that human state — boredom — that Zomorodi argues “has quietly served us well for millennia.” And there are plenty of others: go on a media fast, delete your most-used app, try the quiet commute, or keep your phone in your pocket whenever you’re standing in a line or sitting in a waiting room. As counterintuitive as it may sound, building boredom into your day could bring on the regular boosts of motivation and creativity you need to succeed in the modern world of work.