This kind of behavior only dampens team morale and creates an atmosphere where the team works obnoxious amounts of overtime just to hit deadlines—but with no additional compensation. Even current research reveals that 39 percent of creative leaders consider gaining respect from internal clients as one of their greatest challenges; and 30 percent of the same group feel they receive inadequate funding for staff.

One of the ways in-house teams can work toward gaining the respect they deserve, is by looking to their external agency counterparts for ideas on how to earn respect and work in better harmony with their clients. In doing so, it's easy to see that one reason external agencies get more respect and cooperation from their clients is because they charge their clients for the work they do. Because clients know the company's dime is at stake, they carefully choose what projects they want to contract out; they take into consideration important project details as they plan and review, and they're always conscious of the time they're requiring from the agency. Isn't that behavior the pipe dream for in-house teams?

The 2014 In-House Creative Services Industry Report says that having a chargeback system in place "is a natural evolution for an internal creative services organization and an important step in eliminating a number of challenges common to ‘free' creative services." The same report shows that 80 percent of teams larger than 50 members use a chargeback model.

Who should be using a chargeback system?

Chargeback billing may not be a possibility for every in-house team. If your team has less than ten people, for example, then creating an agency-grade billing system probably wouldn't be worth the effort. But for bigger in-house groups that are starting to feel more like agencies than creative teams anyway, adopting a chargeback system could be the difference between getting treated like a drive-thru service and getting respected as a strategic partner. In fact, nearly three-fourths of in-house creatives that don't have a chargeback billing system agree that client behaviors are difficult to manage because there is no consequence for misuse/abuse.

How agencies do chargebacks (a model for in-house teams)

Typically in a chargeback model, agencies will add up a cost estimate from the onset of the project, often calculating the cost of the project based on what's included in the creative brief. Work doesn't start on the project until client and creative agree on things, and then scope creep or project changes get reflected in the final bill. The Association of Registered Graphic Designers (RGD), a Canadian group, explains how this works:

"Whether a designer charges by project or by hour, how much the entire project costs will be based on an assessment of the work's value and the amount of effort required to provide a successful end product. A designer must understand the full scope of the project and the client's needs before quoting a price."

Generally speaking, when agencies quote a price they will charge either per project or per hour. Here's a summary of both methods:

Billing models that charge per project take into consideration all the expenses related to the project in the planning stages. Before beginning work on the deliverable, client and creative sit down and determine how much the entire project will cost and they agree on a final price. Price ranges for individual projects will vary depending on the type of work, the size of the project, and the going rate of the market. Agencies will often estimate project hours required and then calculate a total price. To get a better idea of what agencies charge, I suggest downloading RGD's "Creative Earners Salary Survey." It's a great resource for all things "agency billing" and has a list of median billing rates per service type. Charging per project requires a lot of pre-project communication, but once the project scope and price are determined they're usually fixed in place.

Per-hour billing is a less negotiable approach than per-project. Even before client and creative meet, the team has established hourly rates for different services based on salaries, effort required, and profit margins. With this method, the final price of a project depends on the amount of hours recorded by the team. Clients have to be content with the final bill because they agreed to pay the hourly rate before the project began. If a job looks like it will cost more than the client wants to pay, the scope of the project can be altered to meet the client's vision.

In some instances, it may make sense for your in-house team to accommodate for both types of billing. Rod Lee, an accountant at Fit Marketing, a custom marketing firm, says,

"At Fit Marketing, we look for the best fit with our clients, based on their needs. For some projects the scope is easy to define and we can give a price upfront, whereas other projects have too many moving parts and an hourly approach makes more sense."

Here are some firsthand experiences with different charging methods by contributors to the Web Designer Depot Blog:

Chargeback billing from an in-house perspective

In-house teams will get paid whether or not they charge for their work, and since all the billing stays within the business, chargeback billing doesn't affect a company's bottom line. So implementing a chargeback system isn't about the money; it's about making internal clients accountable for the work they request and proving the value of the creative team. In fact, some teams aren't allowed to bill their clients for internal reasons. In this event, they can set up a billing system that charges with time instead of money. In either case, the team holds the client accountable for the work they request.

A monetary chargeback billing system for in-house teams uses similar principles to an agency billing system, but it also has a few elements that agencies don't have. One of these is deciding whether to follow a full-cost recovery or subsidized chargeback model.

After choosing between these models, an in-house team decides whether it will charge per hour or per project. If it chooses a per-hour model, it may opt to charge a blended rate to simplify things rather than charge entirely based on service-specific prices. This just depends on the team's preference. 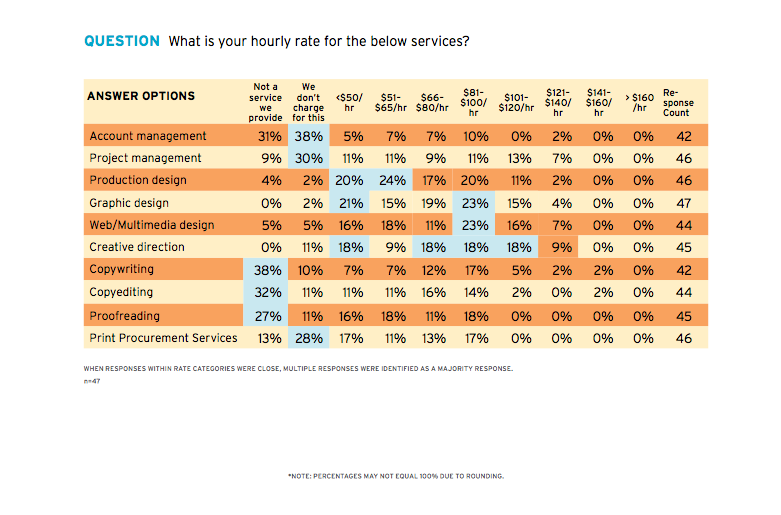 Here are some examples of chargeback rates per service type[/caption] *Graphics taken from the IHIS Report.

Chargeback and get respect

With so many aspects to consider, you can see how all this could get really confusing really fast. Cella Consulting has written a number of articles about different aspects of chargeback billing that are worth looking at if you're considering becoming a chargeback organization. Realize that if you do make the switch, it won't be a quick and easy change. It will take a lot of planning, convincing, and perhaps compromising; but don't shy away just because it's intimidating. Remember, the goal is to distance your team from overwhelming workloads, and get treated with the respect your team deserves.