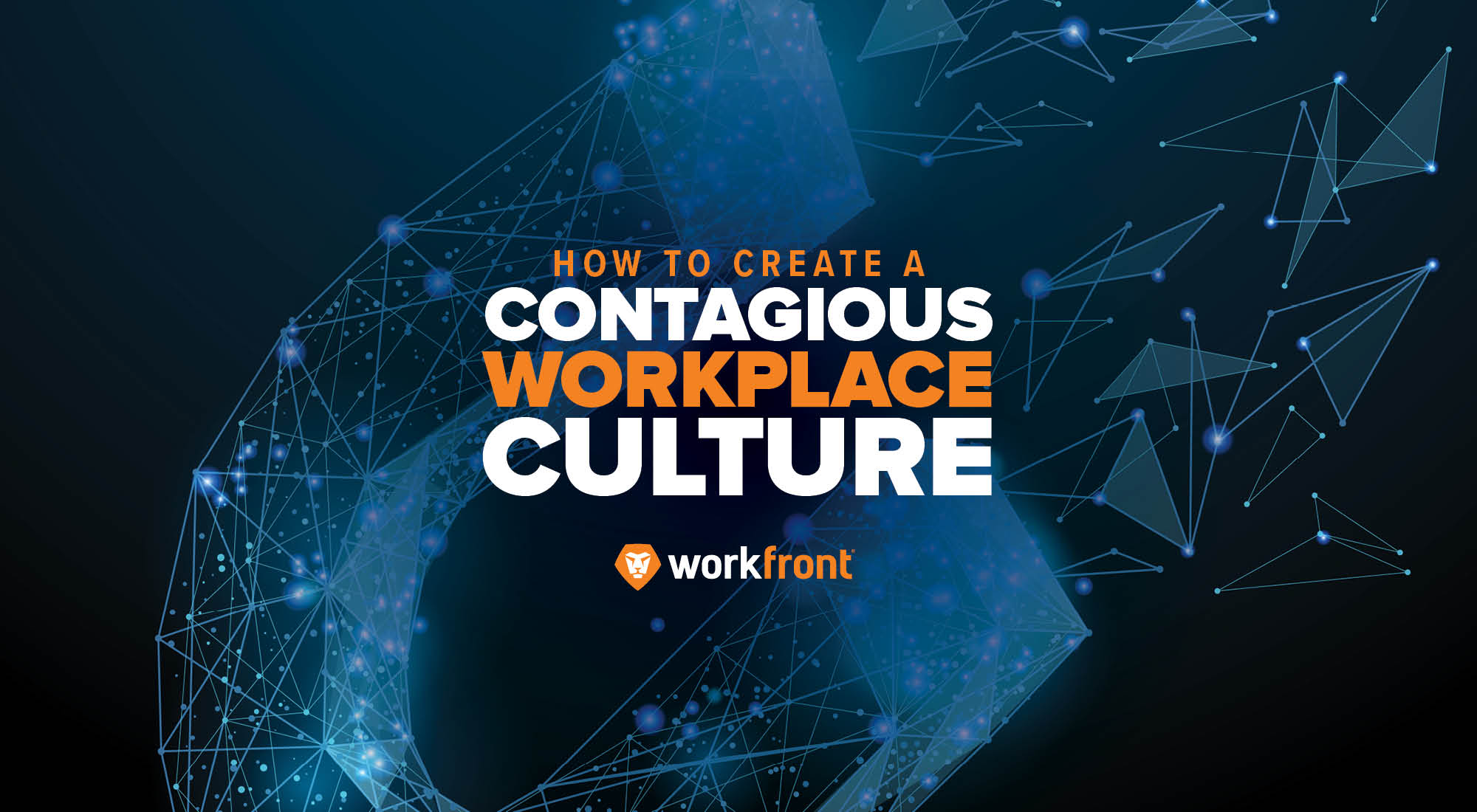 How to Create a Contagious Workplace Culture

By Laura Butler, SVP of People and Culture at Workfront

A year and a half ago when I joined Workfront, our CEO Alex Shootman wanted to inject a couple of new behaviors into our culture. He was determined to create a contagious culture in our workplace.

Alex was appreciative of the difficulty of the task. He knew it would entail more than just sending an email, and he asked all leaders in the company, globally, to come in for training. He chartered the senior executive team to lead this training and conducted detailed trainer sessions. All leaders came in, took the training, raved about it in the surveys, and were excited. They even wrote letters to their future selves to reinforce the commitment.

It was great start to getting people to understand and subconsciously exhibit new behaviors — a process that, according to research from CEB usually takes an average of 22 months.

That's quite a long time. So why, when there are so many priorities to focus on, would our CEO determine to make creating a contagious culture one of four key priorities within the company?

The importance of culture is noted by the famous Peter Drucker quote, “Culture eats strategy for breakfast.”

Culture is largely unwritten and is often described as, “The way things are done around here.”

Perhaps you've had the experience where you've joined a company where they've said they would welcome your new ideas and thoughts, only to find out that their reaction in every instance is based upon “how we get work done around here.”

I know how that goes. For instance, I once joined a large organization and held my first meeting. I came with a clear agenda and desired outcomes, and as we sat down a woman said to me, in front of everyone, “Clearly you are new. You won’t have time for creating a meeting agenda in a few months.” There was a way of doing things, and creating an agenda for a meeting didn't fit.

So as I think of culture, it reminds me of body language. You know, how communication is at least 80 percent non-verbal. And there is a lot of training on how to align body language with what you are trying to communicate.

In that way, I think of culture being to strategy what body language is to communication.

The Relationship Between Culture and Strategy

Consider the body language of your organization and how things are being done. Here are some examples of what I mean by that.

There’s a company that has disrupted an entire industry, operates on a global scale, and is a multi-billion dollar business. It is so popular its name has become a verb… Uber. This market-leading company was founded on a premise of confrontation, challenging the status quo, “super pumpedness” as a way to achieve the strategy.

Which leads me to the next example. This company was founded over 50 years ago in a highly regulated environment and disrupted an entire industry, challenging the status quo, and decades later others have attempted to copy parts of the business model but have been unsuccessful copying the culture. Southwest Airlines’ founder created an employee-centric culture of openness and some might even say joy.   Innovations were all centered around making employees’ and customers’ lives better. In fact, this approach led the company to pledge never to do layoffs. This was difficult and expensive during 2009 quarterly losses, but Southwest Airlines stayed true to its pledge.

At both Uber and Southwest Airlines, the relationship between the culture and the strategy of the organization is very close, with each influencing the other

But not all organizations are so deliberate.

According to research that included over 200 companies, most cultures develop by happenstance, with perhaps intention but no follow through or culture development is delegated to an HR program versus something that is more comprehensive that everyone is responsible for and stewards of.

So how do you intentionally shape a culture?

First I’ll share what I mean by defining your culture.Think about the number-one thing your company is trying to accomplish. For example, we strive to create an enterprise application platform for modern work management.

Next, consider the words that come to mind when you are trying to get something difficult done. For example,in HR I say “manual” more often than I’d like. I also say “administratively burdensome.” On the plus side, “eagerness and optimism” are also said in abundance.

Now let’s consider the future state. When you look at those words, is there anything that should be addressed to help realize your strategy?

For example, the word “siloed” may have come to mind and yet your strategy is to lead a category which will require collaboration.

So now you’ve done a baby step into thinking about how to define your current culture. Keep those things in mind as we move to how to operationalize the culture.

This is where the “roll-up-your-sleeves and buckle-in work” happens. I am going to review six components of operationalizing your culture. These components should help you begin creating a culture plan, if you don’t have one already.

1. Write Down Your Values

Values are most often the part that is written down. We just went through a process of refreshing our values and leveraged our executive team and leaders across the business to evaluate our current and future state and address gaps and also provide more clarity. This is what a lot of companies do and are good at — writing down values.

If you value and need agility, but have a structure that requires more formal communication channels or if you value cross-departmental collaboration, you might consider self-forming work groups or implementing agile methodology more broadly. ERG’s and steering committees can also be silo-busters.

Try asking yourself these questions:

There is nothing that quite undermines a change or desired behavior like a leader who refuses to comply with it.    That’s one reason why Alex had leaders do our training and when we refreshed our values, we first thought about who best demonstrated the culture we want. It is critical to show people what “good” looks like, as they will help find excellence while rooting out the bad.

Consider a few examples where companies selected people to personify their brand.

Wendy Kaufman had once written a letter to Greg Brady of the “Brady Bunch” that went unanswered, so when she joined Snapple she took it upon herself to respond to all the mail. When her passion for customers was discovered, she was featured in advertising promoting Snapple’s customer-centric brand.

My son loved him, yet we cringed as he was not the role model we, as parents, were hoping for. Not because he wasn’t a great player, but because of his off-field behavior. How often does that happen with a leader?

Finally, you may have seen the Apple commercial where one character is a PC and the other is a cool Apple computer, which serves to personify the Apple brand.

So, to personify your brand with role models, evaluate current people that are celebrated and overlooked. Determine if they are celebrated more for what they have done or what behaviors they exhibit and who is in charge of celebrating them.

Processes rarely get a looked at through the culture lens, so I’d like to give you an example of what I mean.

I was with a company that promoted empowerment.n fact, it called its reward program “Empower.” As a vice president in purchasing,, I needed approval to buy a book for my team because all educational expenses needed to be approved by the next level up. What message does that send about empowerment and about the educational culture?

When I was at another company, safety was a top priority so I was not allowed to take phone calls on my cell phone while I was driving. This rule inhibited my ability to make productive personal schedules, but safety was the priority.

Plans are awesome, but then cultural walls come up, especially when new things are encountered. Here’s what I mean.

Remember the picture of the dress — that some saw as blue and black and some saw as white and gold — that went viral a few years ago?

No one was wrong! Everyone saw the same thing differently, from their own perspective.

Yet, often in business this type of thing comes up and there is no structure to decide what is right, so it falls on behaviors. Behaviors that aren’t intentionally defined.

So if the leader says “it’s blue and black,” is that how it’s decided?

Take a strong look at what happens In ambiguity as that is your culture hiding out. It will show you what is really happening in your company’s culture.

Creating a contagious culture comes down to two easy steps: define and operationalize. But remember, good things come to those who wait. It takes time for people to adopt culture changes and for a new way of doing things to become the norm. If you start the process knowing it will take a long time, you won't be disappointed.