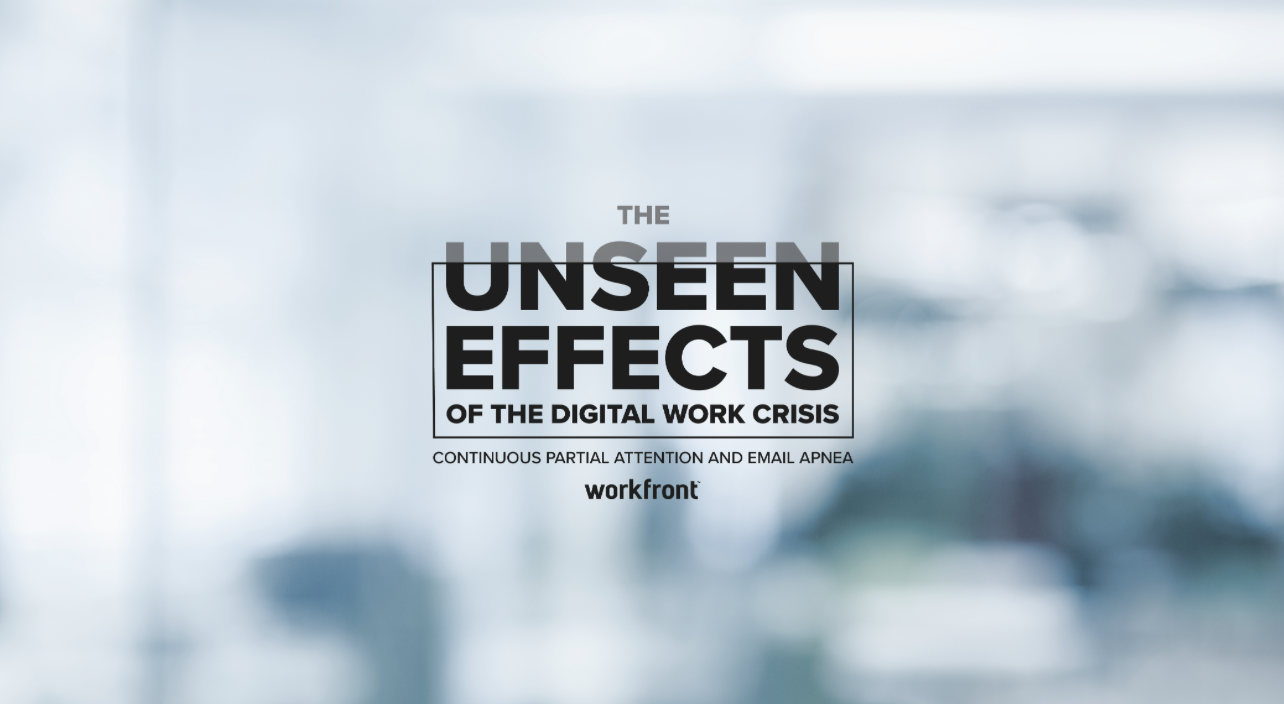 By Scott Duehlmeier | Senior Manager of Communications at Workfront

When the Boston Red Sox recently won the World Series — for the fourth time in 15 years, if you’re counting — they had my full attention. I was especially focused during Game 5. Whether or not that had anything to do with their win is not for me to say. Baseball is all about the superstitions, after all.

As I watched pitcher Chris Sale strike out the Dodgers’ Manny Machado to close that last game, my kids and I did our own little victory dance in the living room, and the high of the win lasted into the next morning at least.

But soon enough, it was back to regular life. Regular, distracted, multi-tasking life. I manage communications at Workfront, after all, so my job requires me to constantly be scanning multiple social channels, hashtags, trending terms, conversations, and more. Setting aside a few hours to focus deeply on something, like a baseball game, is a rare thing these days. And it turns out I’m not alone.

The digital transformation that has been underway for the past couple of decades, from email to the Internet to social media to automated everything, has affected us in ways we’re just beginning to understand. It has transformed the way we work, interact with each other, consume entertainment, socialize, and even the way we think. And the more we can remain aware of what our hyper-connected culture is doing to us, the better we can manage the effects of the digital work crisis. Which brings me to two new concepts that have opened my eyes and sparked a helpful change in habits in my life.

I came across this term while doing research for some social posts around the culture of distraction. Coined by writer and consultant Linda Stone, “continuous partial attention” is just what it sounds like: paying partial attention to everything around us, continuously.

“It is motivated by a desire to be a LIVE node on the network,” Stone writes. “Another way of saying this is that we want to connect and be connected. We want to effectively scan for opportunity and optimize for the best opportunities, activities, and contacts, in any given moment. To be busy, to be connected, is to be alive, to be recognized, and to matter.”

And for me, it’s my job. So what’s the problem?

Well, if we become habituated to this way of thinking and interacting with the world, we can:

Ivan Misner, writing in entrepreneur.com, asks: “Be honest: whom do you greet first when you get up in the morning — your spouse, kids, the dog OR your virtual community? Do you reach for your smartphone before you even throw your legs out of bed to get up?”

I’m often guilty as charged. But the more I’ve learned about continuous partial attention and the problems multi-tasking can cause, I’ve tried harder to follow these tips, which I’ve written about before. And I’ve recently encountered one more.

Author and sought-after keynote speaker Mel Robbins has coined something called “The Million Dollar Morning.” One key feature of her routine is to do the things she values first, before letting herself get drawn into other people’s priorities. She works out, reads, meditates, thinks, and plans BEFORE she checks email, texts, or social media.

“We live in a fast-paced world with tons of anxiety and distractions,” Robbins writes. “We celebrate the ability to speed up our minds and our lives, but it is absolutely essential to learn to consciously slow them down as well. It’s equally important to learn how to calm yourself. And you need to cultivate that ability.”

For me, while I have no choice but to scan social media for much of my day, I can at least start my mornings with a healthy dose of focus, and find times to step away from the never-ending stream of Twitter and Facebook (preferably more often than once a year, during the final game of the World Series).

Linda Stone agrees: “As we make choices to turn the technology OFF, to give full attention to others in interactions, to block out interruption-free time, and to use the full range of communication tools more appropriately, we will re-orient our trek toward a path of more engaged attention, more fulfilling relationships, and opportunities for the type of reflection that fuels innovation.”

Stone has coined another term that means just what it sounds like. “Email apnea,” much like sleep apnea, is a temporary cessation of breathing, shallow breathing, or holding one’s breath while checking email or otherwise sitting in front of a screen. Stone had noticed that she tended to hold her breath whenever she sat down to check email. “When I would get up and walk around, my breathing was completely different than it was when I was working on my computer,” she says. Curious, she conducted a study and found that 80% of people tend to do the same thing.

I asked my colleagues if they thought they suffered from email apnea, everyone said it felt somewhat familiar, but one in particular agreed strongly. “I actually had a college roommate point this out to me nearly 20 years ago,” says content marketer Angie Lucas, ”but I didn’t know there was a word for it! Apparently, when I’m concentrating in front of my computer, I’ll hold my breath for long stretches of time, and then make a little unconscious noise in the back of my throat when I start breathing again. I’d never noticed it before she pointed it out. She was right; it is pretty annoying, especially if someone nearby is trying to concentrate or study.”

But beyond being annoying, email apnea can actually lead to stress-related diseases. Writing in Psychology Today, Susan M. Pollack quotes research from the National Institute of Health, which claims that holding one’s breath “disturbs the body’s balance of oxygen, carbon dioxide, and nitric oxide, which help keep the immune system strong, fight infection, and mediate inflammation. It can affect our well-being and our ability to work effectively.”

And considering that the average knowledge worker spends 16% of their time on email (or 6.4 hours out of a 40-hour work week), these negative effects can add up.

You could argue that any screen time at all could cause this kind of shallow breathing, but I’ve found that email is especially frustrating. Unlike the endless stream of social media, it’s targeted at YOU specifically, there’s a certain amount of pressure to respond, it’s difficult to stay on top of, and it places other people’s priorities ahead of our own. Mel Robbins calls checking email “a critical mismanagement of time.” She has trained herself to ignore email until everything else that needs to be done is done.

“I’ve usually put in between 5 and 7 hours’ worth of work before I check my email for the first time,” Robbins says. “And I try to spend less than an hour on email per day.”

That may not sound realistic for those of us who are not entrepreneurs with the ability to manage our own schedules however we want to, but I can say that if you get the rest of your work organized and streamlined, it really is possible to drastically limit the amount of time you spend in your inbox. Modern work management tools are one way to make this happen. They collect the complete DNA of Work into one manageable space, centralizing all tasks, content, and collaboration, so you have the visibility you need to confidently stay on top of your work, which means you don’t have to be a slave to that inbox anymore. And maybe, just maybe, give you a chance to breathe a little easier.

But wait, you might be asking. What about the 20% of people who don’t have email apnea? Well, they tended to be dancers, musicians, triathletes, and test pilots who had been taught breathing techniques to help them manage their energy and emotions. (I’m none of those things, so I think I’ll start trying the 4-7-8 method.)

The digital transformation has brought us benefits we wouldn’t trade for the world. There’s no “going back,” and we wouldn’t want to, anyway. But it’s important to remain mindful of the downsides, including continuous partial attention, email apnea, the culture of distraction, and the constant multi-tasking (or task-switching) that hurts our brains as well as our productivity. I know that I, for one, am going to work on focusing and breathing more deeply to combat the negative effects of all of this positive technology — and not just when the Red Sox are playing.