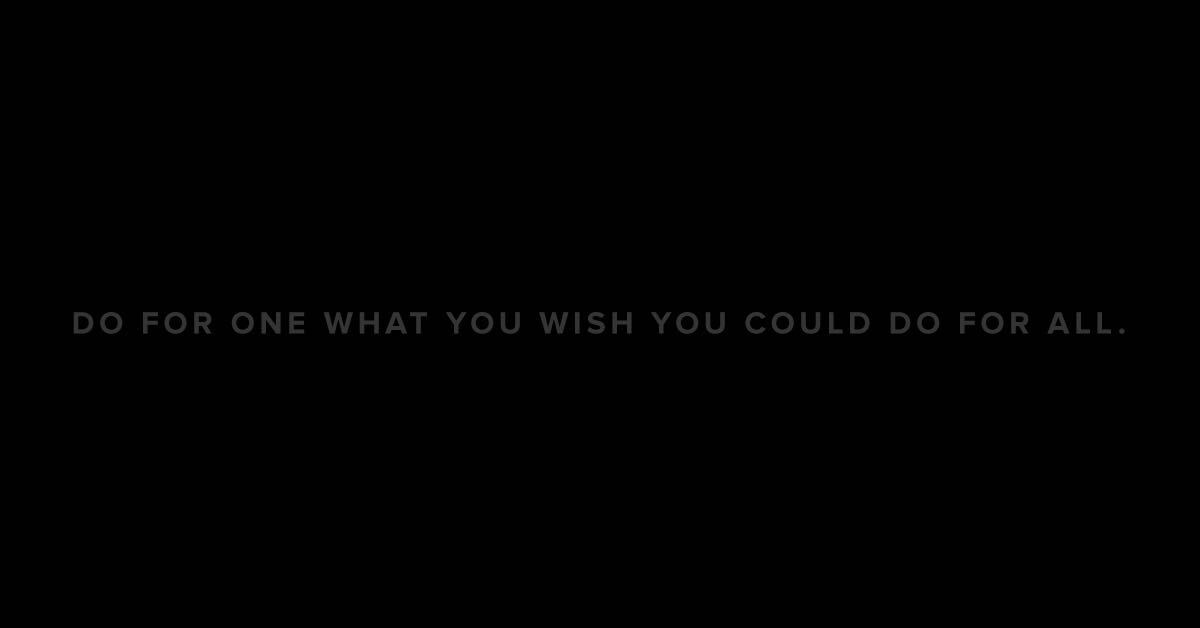 Do for one what you wish you could do for all

This past weekend I shared my thoughts on the death of George Floyd with the Workfront family. I only intended the letter to be for our internal team, but in this moment I know it is important not to be silent. I feel so much kinship with you: our customers, partners, and the broader Workfront community, that I want you to know how I feel. So I decided to share the letter I wrote to our employees, unedited, with you:

Most of the time I communicate with you it is about our company plans, results, or areas of focus. Today I want to write to you about the death of George Floyd. This is not meant to be a public communication, although I realize it might become public. I wanted to communicate with you, my friends and co-workers, before I made any public comments. Also, I would ask for some grace when you read this, I know I am the CEO and so I am supposed to get everything right before I send out a communication. But I am also a human with strong emotions and I might write something that individuals might take as political within my email. I have no political agenda in this—only a human agenda.

In the country that I love a man should not die because he is suspected of passing a fake $20. A man named George Floyd did die. In the country that I love a man should not be killed in a neighborhood a short jog away from his home. A man named Ahmaud Arbery was killed. In the country I love, a 26 year-old emergency room technician should not be shot eight times in her own house after the door had been knocked down with a battering ram. A woman named Breonna Taylor was killed. I've researched the stories across multiple different local, national, and international news sources. I would encourage you to do the same and not solely rely upon information connected to hashtags in social media. These are real human beings who deserve to have their story told in a complete manner, not in sound bites manufactured for different polarized news outlets.

To my Black teammates, in 2005 I went to a funeral that was unlike one that I had been to before. The prior year in 2004, I buried my mom and two sisters so I was familiar with funerals but this one was different. On July 4th, my wife's nephew died driving drunk. He was a great kid and had one too many at a party, drove off a bridge, and died instantly. When I arrived at the funeral I could see the intense pain that my wife's brother Alan and his wife Starla were going through. I could see their pain, I could try to comfort their pain, but I could not understand their pain because I have never lost a child. This is the only analogy I have right now. I can see your pain, I want to comfort your pain, but I don't understand your pain because you are going through something I have never experienced. I am sorry for your pain.

To my teammates who are People of Color, thank you and your allies for creating the Mosaic employee resource group. There are some who say that the birth of Mosaic creates the potential for division instead of unity. But I know that is not true because I have sat with you and listened to your hopes and dreams. I have heard you talk about how you believe there is potential for a company like Workfront to show the world how diversity and inclusion can be done right for everybody in the company. Thank you for having the courage to start Mosaic. I have always wanted anybody, no matter what they look like or who they love, to see the Workfront logo and believe that they could be successful at our company. Mosaic will help make that happen and you have my unqualified support.

To my White teammates, and based upon current ratios there are over 600 of us. I have read the notes you've sent me. I've been in conversations with you in which some of you are frustrated because you think the current situation targets white people as racist. You tell me that you have a hugely compassionate heart and you want to be part of helping your teammates and your community. You tell me that it is painful for you that you are being judged without people really understanding what you care about, who you care about, the service you have done in your life, and the effort that you have gone to in order to build bridges not fences. What you are saying is that you want to be judged by the content of your character, not the color of your skin. And that is the same thing that Dr. Martin Luther King, Jr. said, "I have a dream that my four little children will one day live in a nation where they will not be judged by the color of their skin, but by the content of their character."

To my White teammates, maybe you've been angry about this for six days since George Floyd was killed. Or maybe longer than that; you've been angry that people have put a label on you because of the way that you look. Or you are angry that people have put a label on the people group to which you belong. What would it feel like to carry that anger for a generation? For a lifetime? For the history of a family? For the history of a people group? I don't know what that feels like. But if we are going to be a great place to work, everyone needs to feel safe working here. And to feel safe working here, they have to show up with their whole self and part of their whole self might be some anger that you and I don't understand. But you and I have to be willing to listen to and learn. It may be really uncomfortable, but the greatest love you might show for a teammate is to say, "Tell me your story—I really do want to know" and then not say a word while they talk.

To my Workfront teammates. I know right now there can seem to be some insurmountable social challenges. We want to fix it, we want it to go away, we want to help people, we want to ease the pain of so many. But it seems so huge. I want to share with you something my wife told me once that has helped me in moments like this. I had just landed in Ethiopia and it was my first trip back after adopting our daughters. I was walking down the street to get over jet-lag and a little girl came up to me, just the size of my oldest daughter. She held out her hand and I gave her some money and she skipped back happily to where her mother lay curled up sick on the sidewalk with another young girl, the age of my youngest daughter. My heart broke and then I looked down the street and about every fifty feet I saw the same scene. I called my wife and I was emotionally upset that I could not fix the scene in front of me. My wife said to me,

"Alex, do for one, what you wish you could do for all"

To my Workfront teammates. We are a good company filled with good people and there is a lot going on right now. We can't fix everything, but each of us can be committed to do for one what we wish we could do for all.