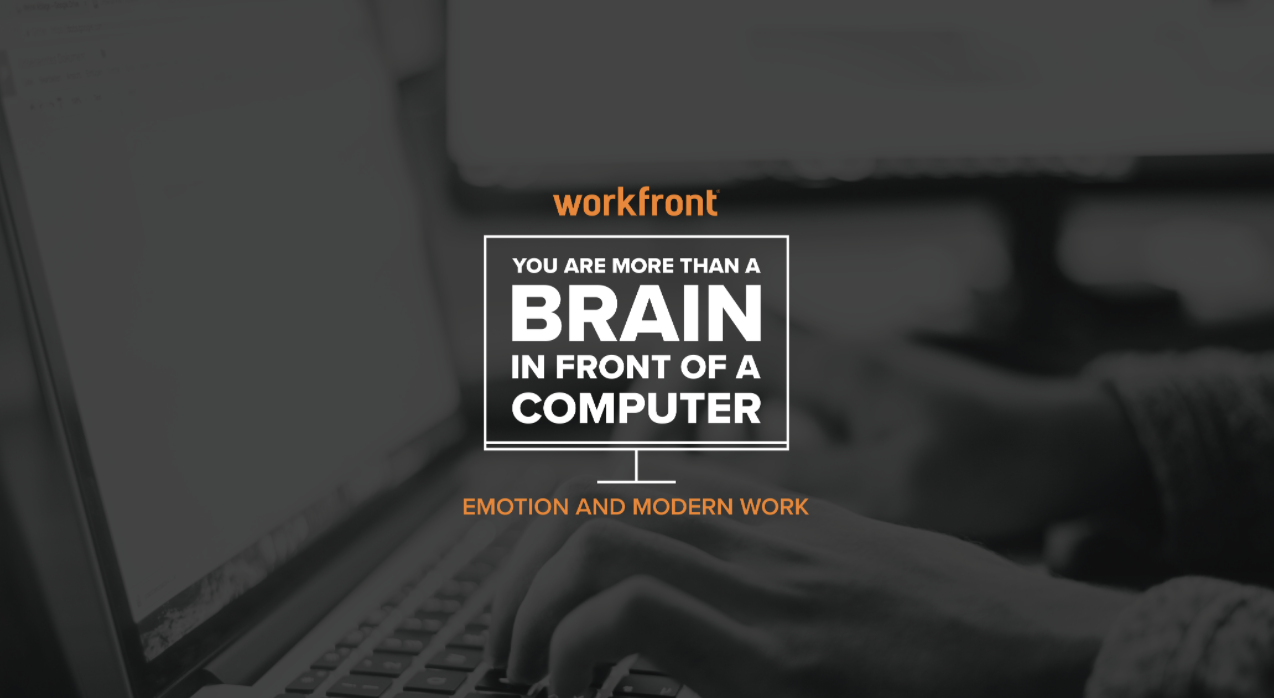 You Are More Than a Brain in Front of a Computer: Emotion and Modern Work

Some days nothing seems more natural than working in front of a computer screen. If you’re like me, you and almost everyone you know does it, and few of us give it a second thought. It’s just the way life is.

And yet as recently as 50 years ago, almost no one worked this way. Instead, for roughly 10,000 years, most human beings spent their days farming together. And before that, since the arrival of our species around 200,000 years ago, we spent our days working in tribes as hunter-gatherers.

When we forget how strange it is to work all day in front of a computer, we risk overlooking the social and emotional components of work that make us human. Interactions become mediated by colorless technology such as email, meetings become merely transactional, and work seems like it’s strictly about the exchange of knowledge. To a degree, that last point makes sense. We are talking about knowledge work, after all.

This emotional component of work must be taken into account for any project to be successful. As Workfront CEO Alex Shootman writes in his book Done Right, “If you want people to engage with something, you need to appeal to both their rational and emotional side.”

To bolster his view, Shootman writes about working with an academic named Chip Heath at Eloqua where Chip was on the advisory board and Alex served as president. Alex was inspired by a three-step framework from Chip and Dan Heath’s book Switch — a framework based on Jonathan Haidt’s idea of the elephant and the rider.

We’ve all experienced it. We get into a disagreement with a friend or a colleague, and despite our best efforts, our stress levels rise. Our rational self can’t simply lecture the stress away. The emotion exists, regardless of what our best logic says.

Because of this, we cannot ignore emotion if we hope to successfully lead projects. We must consider what people are feeling, because feeling is the elephant that moves the rider forward. As Chip and Dan Heath write, “When change works, it's because leaders are speaking to the elephant as well as to the rider.”

The three-step framework from Chip and Dan Heath gives business leaders a way to do that. Even if you've read Switch, it's useful to review the basics:

1. Direct the rider. Chip and Dan Heath write that when people resist a directive it’s often because they don’t understand the direction they should go.

It’s like telling the rider of an elephant to go to a lake to get a drink without telling them which direction the lake is or how to get there. You shouldn’t be surprised if they never arrive. And you shouldn’t blame the problem solely on them, or think they’re not arriving because they’re being insolent. As Chip and Dan Heath say, “What looks like resistance is often a lack of clarity. So, provide crystal-clear direction.”

2. Motivate the elephant. If you really want change, Chip and Dan Heath say that “it’s critical that you engage people’s emotional side.”

To do this, the authors suggest finding the feeling you want to evoke in a given scenario.

Do you need your team to buckle down and focus on a short-term problem? If so, negative emotions such as fear will motivate them.

Do you need your team to solve big, ambiguous problems? If so, positive emotions such as hope will do the trick.

No single emotion is right in every scenario. Find the feeling that’s right for the scenario you’re facing.

After you’ve found the feeling, you’ll want to motivate the elephant by creating milestones — frequent markers of progress that help your team feel proud of their wins. These milestones shrink the change so that team members avoid being overwhelmed by the task ahead. They also help team members embrace the suck and make mundane but necessary tasks meaningful. This is critical because it’s these mundane tasks that will cause your team to lose inertia — especially if they can’t see why those tasks fit in with the bigger vision of the company.

3. Shape the path. Even with clear direction and an ample dose of motivation, people might still struggle to achieve their goals. So the final part of this three-step framework is to, in the words of Chip and Dan Heath, “remove some friction from the trail.”

The job of each worker and each leader is to remove this friction. When friction is removed and people enter a state of flow, they not only get more done, they also feel better.

In the Digital Age, Feeling Matters More, Not Less

As I mentioned above, there’s a tendency to think that because we’re knowledge workers we don’t need to focus on emotion. Emotion, the thinking goes, may have mattered when humans primarily worked in small tribes to survive in a physically dangerous world. But what matters today is knowledge.

If we think our primary value lies in how many facts we know, we’re bound to be disappointed.

And yet if knowledge acquisition is all that matters, we’re already irrelevant. IBM’s Watson beat the best human Jeopardy players in the world nearly a decade ago, and the computer in my pocket can access every line of Wikipedia. If we think our primary value lies in how many facts we know, we’re bound to be disappointed. As our State of Work report shows, 48% of us say we know someone who has lost their job due to automation, and the move to automation is just beginning.

The truth is that as we move further into the digital age, emotion will matter more than ever. The future will belong to people who can effectively merge intellectual and emotional intelligence to do work no machine can do. This is why, for instance, Netflix is spending $6 billion, Amazon is spending $4.5 billion, and Apple is spending $1 billion to create original video content. These companies know that if you create something with intellectual and emotional appeal, you’ll find an audience.

So What’s the Lesson Here?

For me, the primary lesson is that knowledge workers must focus on feeling. If you’re creating technology, this means you must pay careful attention to when users feel frustrated. Take that feedback seriously. And don’t scoff at requests for emotional features such as emojis or gifs. People want a user experience that delights them, even in a B2B product. (This focus on delighting users is quite possibly the single biggest reason for Slack's popularity, in my opinion.) If you don’t delight users, someone else will.

In a similar vein, if you’re not getting the results you want from your team, check in with how your employees are feeling. To do this, you might ask them what they want most from their job then listen with empathy to their answer. Or you might ask them if they feel like they are getting what they want most in their day-to-day work. If there’s a disparity between what they want and what they’re getting, they’re likely not as happy as they could be, which could lead to devastating results for your business. As Harvard professor Teresa Amabile shows, too many workers today are “quietly disengaged from what they do, and their performance is suffering as a result” at an estimated cost of $300 billion per year.

Finally, you might turn inward and note the moments at work when you’re functioning as little more than a brain in front of a computer. Ask yourself what you need to feel otherwise. Maybe it’s a matter of holding walking meetings — as Steve Jobs, Richard Branson, and Barack Obama regularly do (with benefits backed by science). Maybe it’s a matter of getting away from a computer screen and, like Warren Buffett, choosing to read books and paper reports instead. Or maybe it's a matter of tuning into the body during a daily meditation, as Marc Bernioff, Ray Dalio, Oprah Winfrey, and many other business leaders do. Whatever the solution, it can help to be aware of the body — to work as though you are more than a brain in front of a computer.