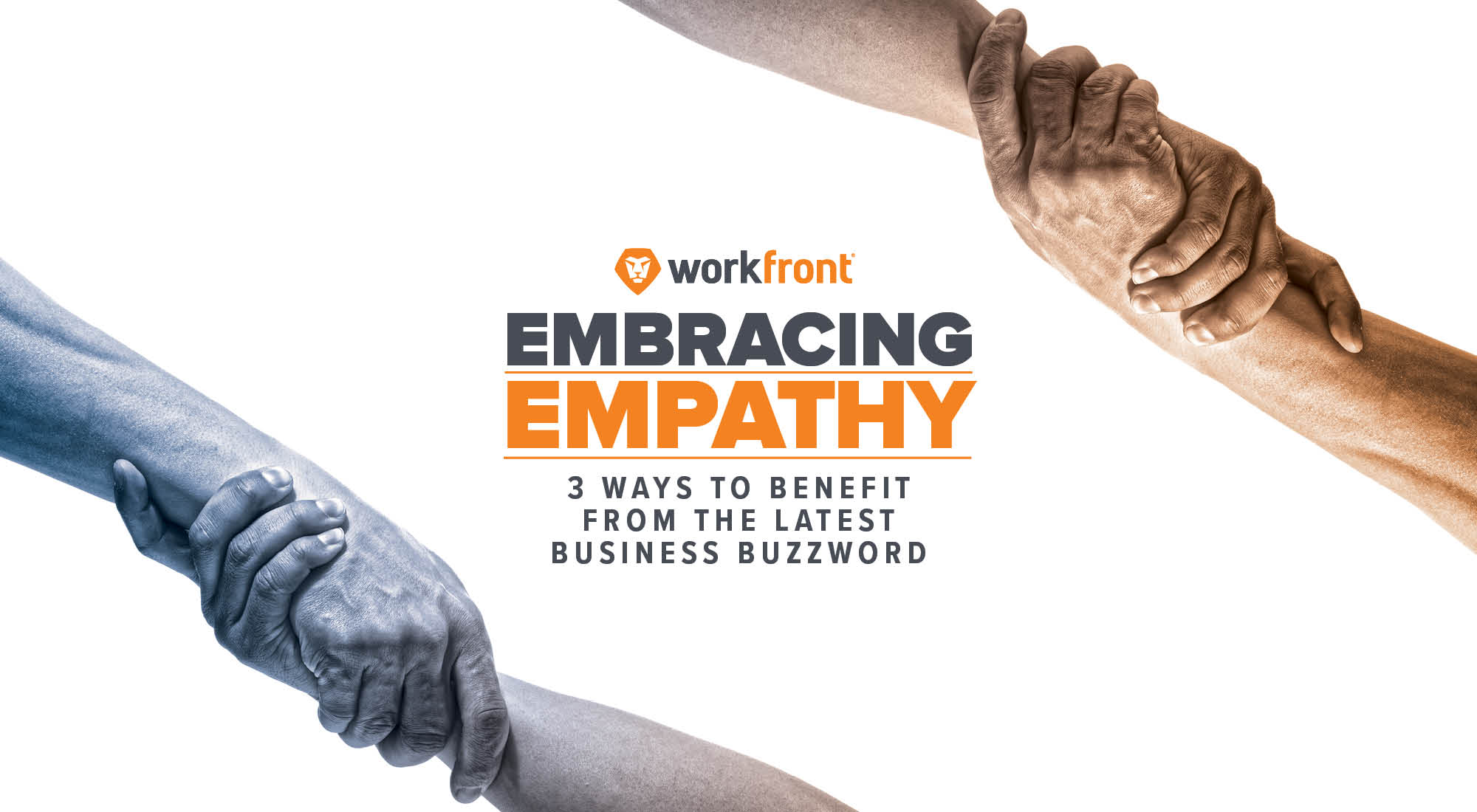 Embracing Empathy: 3 Ways to Benefit from the Latest Business Buzzword

By Heather Hurst | Senior Director of Corporate Marketing at Workfront

Everyone’s talking about empathy these days. There are best-selling books about it (both for and against). There’s even an Empathy Index that ranks companies based on an analysis of internal culture, CEO performance, ethics, and social media presence. The author Belinda Parmar even goes so far as to say in Harvard Business Review that “Empathy has never been in more explicit demand from corporate leaders,”

Pop culture is on board, too, with the newest Guardians of the Galaxy movie featuring an insect-like empath, Mantis, in a prominent role: “If I touch someone, I can feel their feelings.” (Says Gamora in return: “Touch me, and the only thing you're going to feel is a broken jaw.”)

Whether you’re on Team Mantis or Team Gamora, brace yourself, because feelings are starting to play an ever-greater role in the modern workplace. And that might not be a bad thing.

As Parmar points out, “The top 10 companies in the Global Empathy Index 2015 increased in value more than twice as much as the bottom 10, and generated 50% more earnings.” And as for individual departments within companies, she found “a correlation as high as 80% between departments with higher empathy and those with high performers.”

Luckily, empathy is a trait that can be developed and built over time, both on an individual and team level. Here are three simple ways to get started.

Carroll is the founder of empathy-based marketing firm Markempa. He believes most leaders make the mistake of “tuning in for 18 seconds” to what other people are saying while mentally formulating a response or a decision. I don’t know if you’ve ever experienced this type of “listening” from a manager or leader, but I certainly have. And when you’re on the receiving end, you can tell.

Carroll encourages leaders—and everyone, really—to do more than listen. He suggests engaging fully and repeating aloud what you’ve heard. When you’re speaking or responding, watch your team’s non-verbal cues and minute changes in facial expressions and posture. If you pay attention, you can tell when people don’t understand what you’re saying and, quite often, whether or not they agree, before they even open their mouths. Leaders who want to be both heard and understood would do well to follow up on this type of body language. A simple, “Heather, what are your thoughts?” is a great place to start whenever someone’s body language might indicate resistance or dissatisfaction.

What this can do for you: As Diana Ross and Marvin Gaye crooned, it’s never too late to stop, look, and listen to your…coworkers. That may not be the precise lyric, but you get the idea. This kind of empathic leadership tends to catch on in an organization, cultivating a more understanding, listening culture from top to bottom. Not only does this make for a more pleasant place to work, it also ensures that the best ideas (and the most important critiques) get heard, no matter who says them.

2. Get in the Trenches with Customers

“I see empathy as a muscle that needs to be exercised. It doesn’t necessarily come naturally,” writes Caren Maio, CEO of Nestio, a B2B leasing management solution. After pivoting the company’s original business plan from being renter focused to catering to landlords and brokers, Maio realized she no longer had much in common with her clients. “If we were to have any chance of success, my whole team needed to get inside the heads of our clients, live their pain and find solutions that made their day easier,” she says.

She spent two months in the trenches with her customers, shadowing them, poring over spreadsheets with them, interviewing anyone who was willing to talk, even working out of their offices. “To some, this could probably be dismissed as a waste of time,” she writes. “But for me this was empathy R&D. It was a direct pipeline into what made our customers tick. Looking back, I couldn’t imagine a better use of my time.”

As someone who has spent hours attending Workfront user groups all over the country, I couldn’t agree more. The insights I’ve gained from spending time with the actual humans my product serves go far beyond anything I’ve learned from abstract user data. This kind of learning feels more personal, more profound, more REAL. And it doesn’t just help me understand my customers better. Rubbing shoulders with those we serve reinforces my belief that the work I do is important; it’s helping real people in the real world.

What this can do for you: One of my boss Alex Shootman’s core beliefs is that true motivation requires two ingredients—understanding your role in the organization, and believing it matters. Giving team members opportunities to empathize personally with the customers you serve ticks both boxes. And what team wouldn’t benefit from an extra boost of motivation?

3. Use Technology to Enhance Human Connection

As marketing guru Seth Godin has said again and again, we’re having an “Industrial Age Hangover.” Many businesses are still stuck in a factory mindset, despite the overwhelming and ongoing effects of digital transformation. Today, we’re operating in a connection economy. “Now, it matters not just that you do your work but how and what impact you make on other people,” said branding consultant and TEDx speaker Teri Trespicio in an interview with Workfront.

“Just because you’re a knowledge worker doesn’t mean that you’re interested in what you do, and that’s a big problem and a big liability for businesses,” Trespicio continued, pointing to the high cost of employee disengagement—more than $500 billion per year in the U.S. alone, according to some measures.

Automation and other time-saving technologies are rapidly changing the way we work, and if we’re not careful, it will only amplify the already costly levels of disengagement. “An eye toward only efficiency and being like robots is just not going to get a response because it doesn’t matter if I’m there to do it. It means that if I leave, someone else will do it, and, thus, I don’t care,” says Trespicio.

Technology in the workplace should be employed in a way that amplifies human engagement, communication, and connection—rather than replacing it.

“You could invent the coolest tech in the world, but if it’s not used to further create empathy, curiosity, and connection with people, it’s not going to do the job,” Trespicio says.

What this can do for you: The right kind of technology—an Operational System of Record (OSR), for example—streamlines busy work and “shadow work” so we can spend less time planning, structuring, managing, and orchestrating our tasks. As a result, we can spend more time on the creative, human, empathic work that machines can’t do for us. Rather than wasting our face-to-face time with colleagues discussing deadlines, project status, and the other mechanics of work, we can devote it to high-value brainstorming and authentic connection.

Feelings, Nothing More than Feelings…

Believe me, I’m as surprised as you are to find myself advocating for more feelings in the workplace, but the data is in. Higher levels of empathy—whether from leaders, with customers, or woven into teams—leads to higher levels of performance, teamwork, and customer satisfaction. I don’t know about you, but I feel pretty good about that.