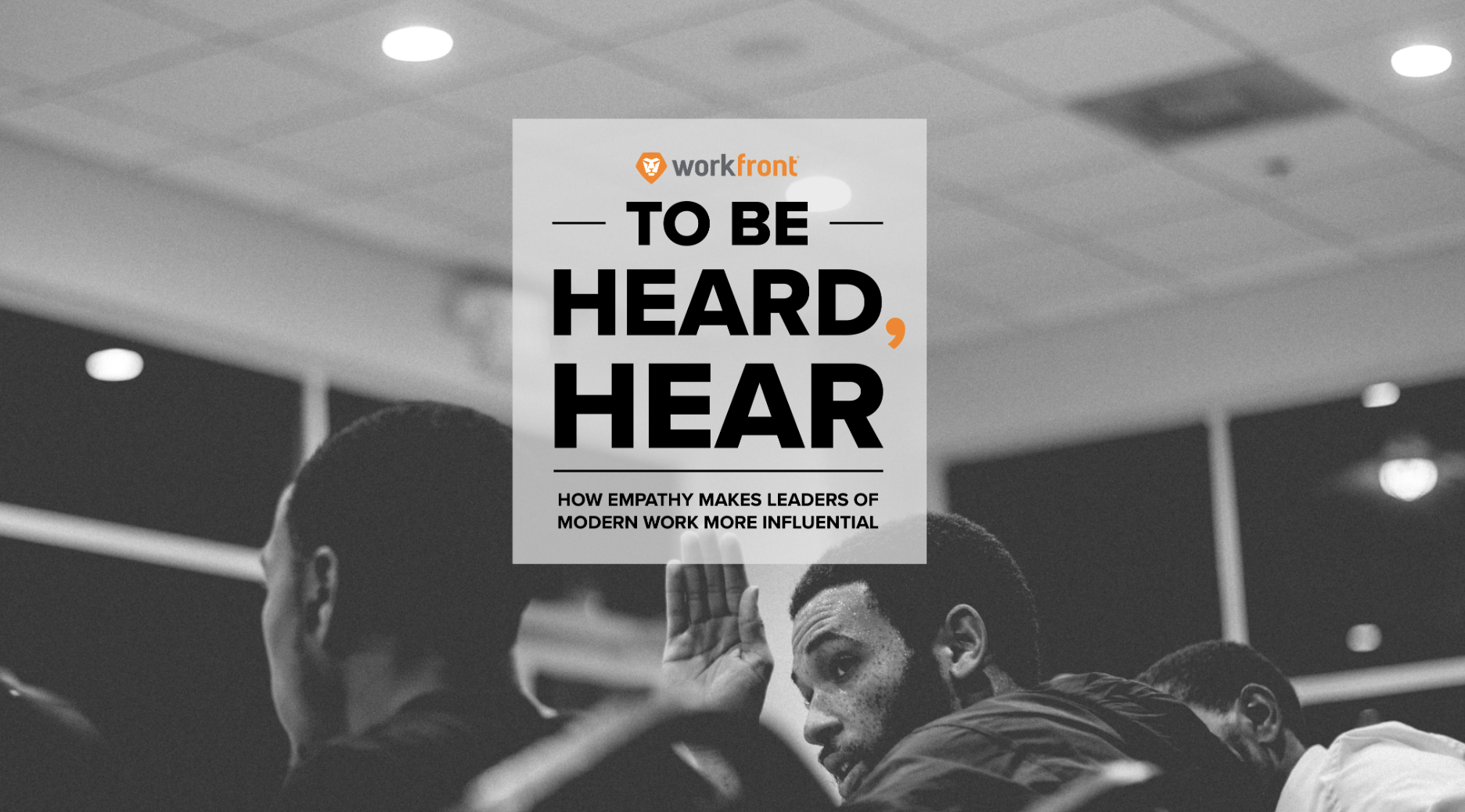 By Alex Shootman | CEO at Workfront

You may be surprised by the answer if you ask the world’s most senior executives what skill is most needed to survive and thrive in today’s digitally connected workplace.

These executives are all chasing digital opportunities and pushing for digital transformation — and they’re all feeling the inertia of analogue systems and thinking slowing them down.

But the skill they prize most is empathy.

That’s what academics at the University of Southern California found on a three-year, continent-hopping quest to tap the wisdom of C-suites from Beijing and Shanghai, Rome and Paris, to New York and Los Angeles. The dictionary may say that empathy is the vicarious experiencing of the feelings, thoughts, or attitudes of another. But practically, what leaders around the world all seemed to prize most was the ability to look at the landscape from someone else’s perspective, whether a customer, employee or company stakeholder. Can the leader actually understand the terrain just as someone else might – particularly when that terrain looks tough to navigate?

Sadly, the researchers also concluded that if empathy is in high demand around the globe, it’s rare in supply.

Describing the team’s findings in Harvard Business Review, Professor Ernest J. Wilson III, who was then the Walter Annenberg Chair in Communication at the University of Southern California, noted that “though empathy is almost universally seen as desirable … [it] is most lacking among middle managers and senior executives: the very people who need it most because their actions affect such large numbers of people.”

Likewise, separate research by the consultancy group Korn Ferry has “repeatedly found that executives with high empathy are among the most successful and engaged.” So, if empathy is a vital attribute in a leader, how do you cultivate it? And how does it play out in practice? If you are not born empathetic, can you build the skill?

Start by changing how you listen

Tips on leadership communications tend to focus on what to say, when, and how. But what a leader says is only one half of the communication equation. The other half — and an often neglected half — is how they listen. According to Brian Carroll, founder of Markempa and author of the best-seller, Lead Generation for the Complex Sale, most leaders make the mistake of “tuning in for 18 seconds” to what other people are saying as they look for a shortcut to a decision. They never really park their agenda.

Instead, Carroll advocates a change of mindset: listen fully and be curious as a leader. Watch your team’s non-verbal cues and micro-expressions. Read your people. “Stop listening with the intent to reply, and start listening with the intent to understand,” Brian advises ‚ and he’s right. There’s a simple sequence you can follow that will improve your own empathy — and set a pattern of empathetic listening in the workplace for others to follow. Repeat aloud what you’ve heard to ensure you’ve understood what’s been said. “So, you mean this …” is a useful empathy skeleton key.

If you’ve misunderstood, you’ll be corrected. If you’ve interpreted correctly, your willingness to double-check shows you’re taking the point and person seriously. Either way, whoever was talking will know you’re striving to take-in their point of view.

How empathetic listening pays back

More than 80 years ago, the American writer and academic Dale Carnegie revealed a truth: “To be interesting, be interested.” Carnegie, the author of How to Win Friends and Influence People, said famously that you’ll make more friends in two months by being interested in other people than in two years of trying to get people interested in you. Apply that to business and you’ll see how empathetic listening will increase the chances that everyone will listen when you do need to provide your point of view. In today’s full-tilt workplaces — where information flies faster than at any point in history … and via multiple channels — leaders can’t take it for granted that an email “from the CEO” will be opened and read by everyone who needs to see it. If you want to positively influence workplace behavior and performance — get stuff done right — you need an attentive audience. The pay-off of listening to understand is when you need to be heard they might be more inclined to listen to you.

Quick test: are you listening enough to influence behavior?

But wait, leadership is supposed to influence. So how do I listen with the intent to influence? There’s a simple 2x2 grid you can use as a roadmap.

On one axis, plot “advocacy.” On the other, plot “inquiry.” If you rank high for inquiry, but low for advocacy — you’re listening. If you rank high for advocacy, but low for listening — you’re telling people what to do and asserting how things should be. How about the top right quadrant where high inquiry and high advocacy meet? That’s when you’re influencing and consulting rather than telling people what to do. Great communicators and empathetic leaders understand what’s required in the moment. They pick the right quadrant to be in, based upon the needs of the team at the time. Sometimes, you just need to listen; at others, you need to assert an opinion to make your view of the world clear — particularly if the way forward seems shrouded by fog. Sometimes you just need to keep your counsel, be watchful and observe.

Input is not a vote

The benefits of empathetic listening are easily lost if your subsequent action as a leader pays little regard to what you’ve taken the time and trouble to understand. That doesn’t mean you always need to agree with what you’ve heard. One of the most important maxims I have learned to convey is “input is not a vote.” If I genuinely receive your input, appreciate it, and then explain to you why I cannot act on it, you will still respect the honor in which I have treated your perspective.

So why do today’s global leaders prize empathy so much? According to Professor Wilson and his USC team, the answer lies in a demographic shift and the rise of the Millennial generation (born 1980 to 2000). The professor described them as a “confounding cohort” — that can both think of ‘self’ and crave meaningful work and social responsibility at the same time. Personally, I think that sounds like humanity since the beginning of time. And yet Dr. Wilson's main point resonates with me: “Leading and managing [Millennials] requires understanding them individually — the kind of genuine understanding provided not by broad-brush depictions but by empathy.”

What will you do next?

Here’s your first test. If your instinct after reading this is to hit the keyboard and post a quick-fire reply, maybe you ought to pause. Have you read to understand or read to reply? Same principle as listening, just a different format — and one that you encounter every day in messages by email, social and messenger channels.

Or maybe you have questions you’d like to ask?

Ask away. I’d be delighted to explain and repay your interest with mine in return. And I’ll count to sixty before I respond.