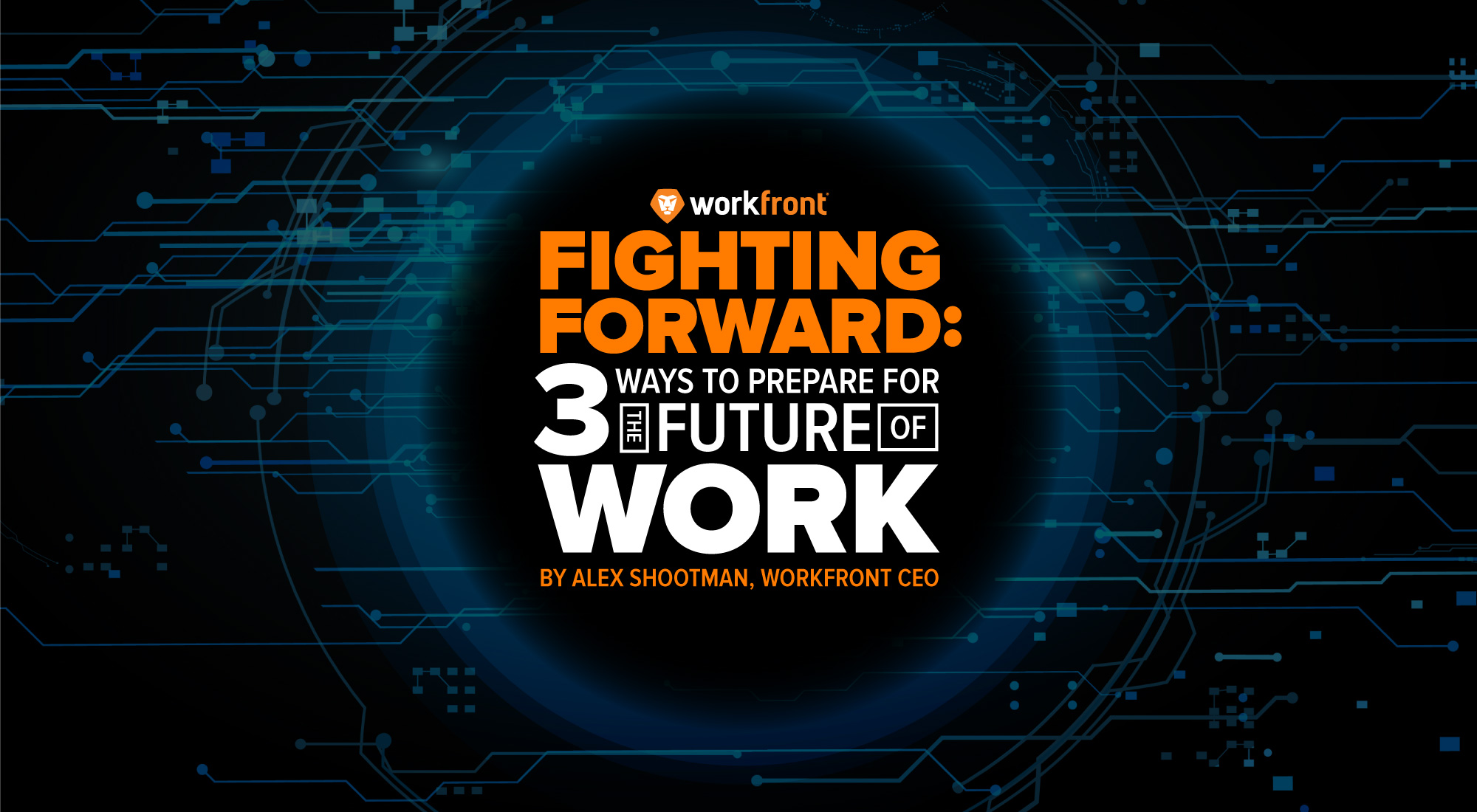 Fighting Forward: Three Ways to Prepare for the Future of Work

The torch has been passed. In the first quarter of 2015, Millennials (adults ages 18 to 35) became the largest generation in the workforce. Does this revelation cause you concern and unease? Or do you feel hope, anticipation, and optimism?

If you had a negative reaction, I can guess your age. Millennials have been getting a bad rap in the news for being self-centered, smartphone-addicted, and lazy. But their press releases have been written by previous generations.

Get our new State of Enterprise Work Report here and find out more about what the future of work will look like.

The negative caricature makes sense as historian Neil Howe, the guy who coined the term "Millennial Generation," explained in a Forbes interview earlier this year:

“Every generation is shaped differently by history.

"Every rising generation brings with it new and different priorities. And every older generation feels threatened when they sense these new priorities could push their world in an unfamiliar direction.

Even if the hype about entitled snowflakes was true—and I don’t think it is—they now rule and they’re here to stay. Wall Street has a phrase, “don’t fight the tape,” that applies here too. Fighting back, whatever that means, seems a pretty fruitless pursuit.

Fight forward instead. Here are three ways to face and embrace the future, anchored with facts from Workfront’s new State of Enterprise Work report.

A warning though: as you fight forward, do not “think outside the box.” Survey respondents ranked it as the number-one overused buzzword, well ahead of both “synergy” and “bandwidth.” 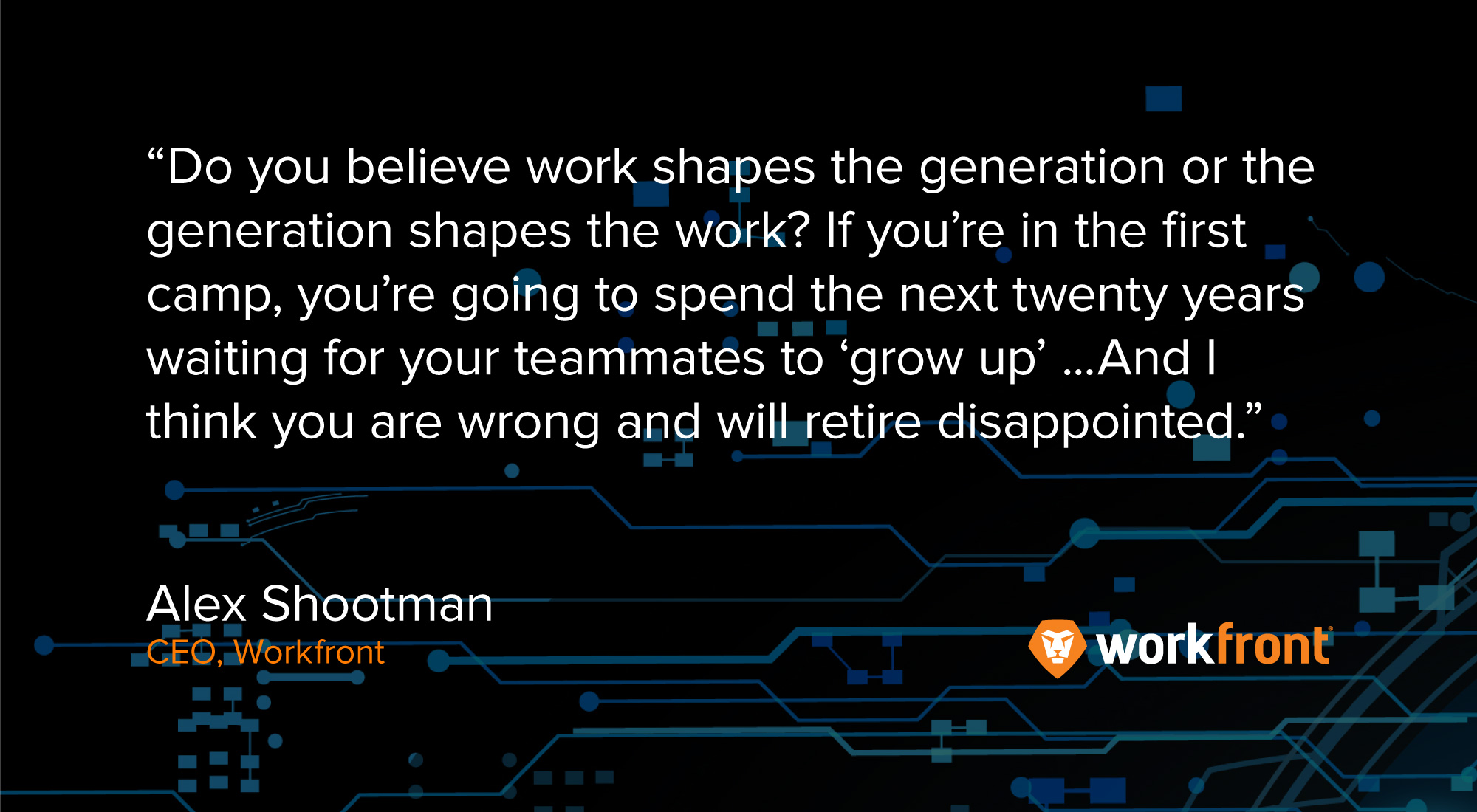 If you’re in the first camp, you’re going to spend the next 20 years waiting for your teammates to “grow up,” fall in line, and eventually grok the existing workplace. And I think you are wrong and will retire disappointed.

If you’re in the second camp—believing that the generation shapes the work—you’ll be more likely to accept, adapt, and harness the natural strengths of your colleagues, rather than stifling them with your own generation-based expectations.

I prefer the term “Digital Native” to Millennial. A Digital Native has grown up in the digital age, rather than acquiring familiarity with digital systems as an adult. Digital Natives are a global generation that values transparency and purpose. For them, work is not just about economics.

Natives view the workplace as egalitarian versus hierarchical.

They prefer telecommuting and flexible hours and like multitasking (or task switching). They learn "just-in-time" and only what is minimally necessary. Natives interact and network simultaneously with many, even hundreds, of others.

Egalitarian, flexible, task switching, just-in-time skills, and highly networked. I think we can agree this is not the current workplace of most organizations. But it will be.

And the faster you and your organization create this type of workplace, the higher your odds of attracting the best of the ascendant generation, the Digital Native.

In our survey, 61 percent of respondents believe we’ll see a redefinition of work-life balance in the near future, including increased flextime and decreased adherence to traditional office hours.

More than half believe most workers will be remote, while half also believe mobile phones are poised to become our mobile offices.

Those are some pretty progressive attitudes, considering that we surveyed the complete age spectrum of enterprise workers today. In the stats above, you can see the effect Digital Natives are already having on the workplace.

If you want your organization to survive and thrive, you’ve got to embrace flexible work because that’s where we’re headed.

While 72 percent of those surveyed either “like” or “love” flextime, only 39 percent are able to take advantage of it once a week or more, with 28 percent not using it at all.

I’m not trying to pick a fight with a Goliath, but I have no idea what IBM was thinking when they canceled remote work.

If you want to keep your folks around, you’re going to have to allow them to go to work when and where they want by logging into a technology platform. Might as well start getting used to it now. 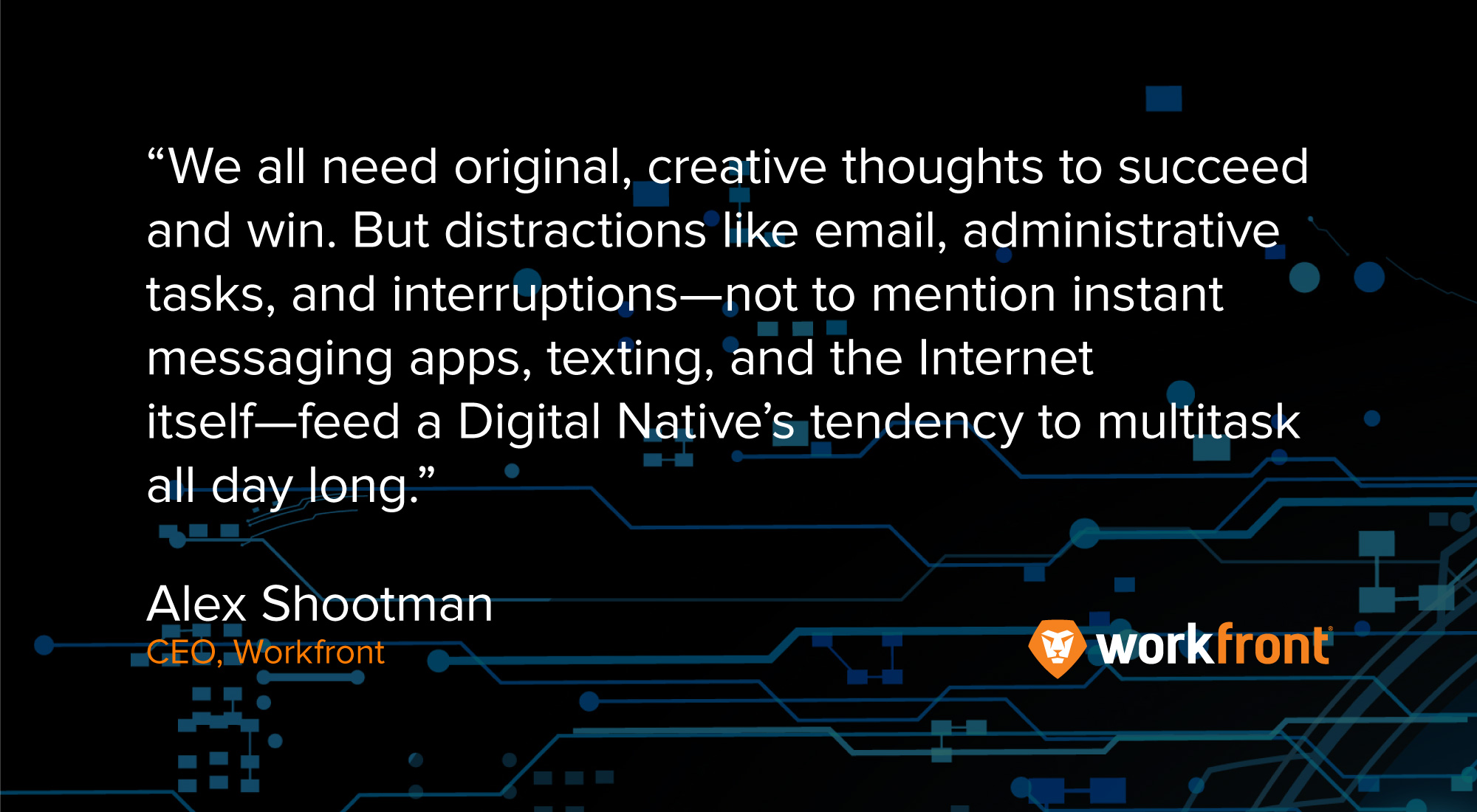 How can this not change the way the brain is wired—the way it takes in and processes information?

And it has. Millennial reporter Caroline Beaton, writing in Forbes, said,

“Millennials were born after the invention of Windows, so we've never known life or work without them.

"Multitasking with technology has become so engrained in our work processes that it’s bewildering we ever did anything without it.”

She summarized current research as follows:

“The U.S. Chamber of Commerce reports that multitasking is rewiring our brains, enabling ‘multiple tasks to be processed in more rapid succession.’

"As our brains adapt to task management, we lose ‘our ability to think deeply and creatively,’ Nicholas Carr writes in The Shallows. The better we get at multitasking, the worse we get at creative problem solving.

"Summing the research, Carr explains that multitaskers are ‘more likely to rely on conventional ideas and solutions rather than challenging them with original lines of thought.’”

This is a problem. We all need original, creative thoughts to succeed and win. But distractions like email, administrative tasks, and interruptions—not to mention instant messaging apps, texting, and the Internet itself—feed a Digital Native’s tendency to multitask all day long.

On average, workers spend just 44 percent of their time performing their primary job duties. That’s over $3 trillion in wasted human capital investment a year—in the US alone!

The biggest loss here isn’t the money; it’s the waste of brain power and human potential. When you can engage the whole person in work they’re good at and passionate about, you get happier workers and more effective results. You have to reduce the noise and amplify creative thinking.

And that’s where comprehensive work management tools like Workfront come in; they automate repetitive tasks, remove the need to toggle between multiple different applications, and lessen reliance on email. (If you’re like the average enterprise worker, you have 200 unread/unopened emails in your inbox at this very moment.)

When people go to work “in Workfront,” they gain hours of extra time to engage their whole brains and get lost in the joy of the work.

I’m from Hawaii, and the best-selling album of all time by a Hawaiian artist is Facing Future by Israel Kamakawiwoʻole (aka “Bruddah Iz”). I like that term. I think you can “face future” with pessimism or optimism. I’m an optimist by nature, and so are the folks who responded to the survey.

In our State of Enterprise Work survey, 81 percent agreed with the statement, “I am prepared for the workplace of the future.”

The future is a world in which we’ll appreciate each individual as a person and an employee, we’ll have a natural tendency towards collaboration and transparency, and we’ll harness new technologies to increase our productivity and allow us to focus on more interesting and value added pursuits.

The future of work is all about the right work. It’s about making work matter.

Download our free ebook, Make Your Work Matter, for insight from seven thought leaders on how you can achieve more.