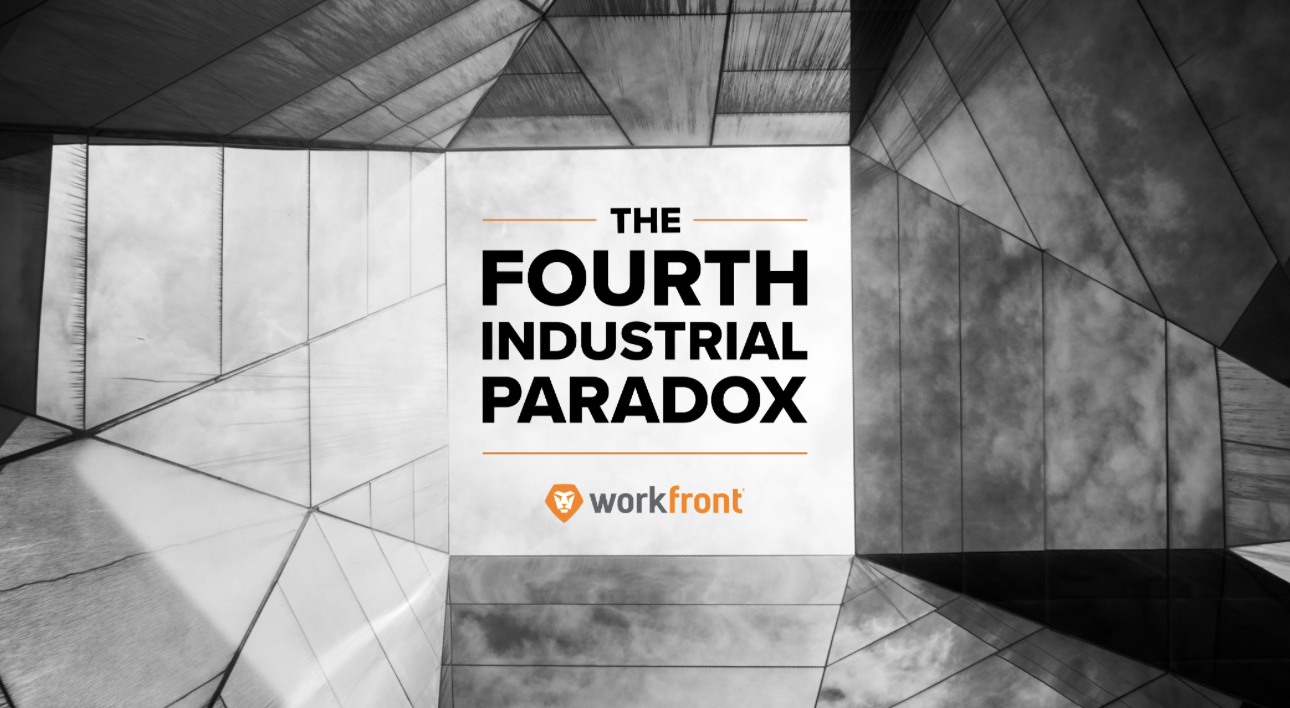 The Fourth Industrial Paradox: Psychological Tips to Navigate It Well

How many times would you have to fold a piece of paper, before the thickness of that paper equalled the distance between you and the moon? The answer is 42! Not very many. So, I did some calculations of my own. It turns out, after the first 15 folds, the thickness of the paper is still only 3 meters; but after the next 15 folds, the thickness grows to 127,000,000 meters. This is the way exponential change works. It starts incredibly slowly and gathers pace as each fold doubles the speed or size. Until at a certain point, the pace of change is unimaginable…and getting faster!

Why is this relevant? We have been living with Moore’s Law for many years. This is the law that computing power and information double every couple of years. It's an interesting fact, but now we’re way past the 15th fold. For example, David Henshall, CEO of Citrix, estimates that in 2018 we will produce more information than we have produced in the entire history of the world before this year… and next year, we’ll do it again (at an ever-increasing rate). Our technology, our cloud-based computing platforms and our artificial intelligence prototypes are progressing fast and getting faster.

Workfront’s State of Work report contains some findings that touch on one of the great challenges for organizations and employees today — a challenge I refer to as the Fourth Industrial Paradox. We are having to deal with more information, more communication and more change than ever before. So, in response, we work faster and more efficiently. Yet this very speed and efficiency kills innovation which is, almost by definition, deeply inefficient. In our well-meaning quest to cope with everything the Fourth Industrial Revolution is throwing at us, expediency is chosen over experimentation, and productive exchanges are preferred over exploratory conversations. In the process we undermine our ability to innovate. In other words, our very efforts to survive the digital deluge are undermining our ability to thrive in the future.

The report found that 65% of UK workers are too swamped with day-to-day issues that they just don't have time to think beyond their to-do list. That is, they have no time to innovate. Is this true? Do we have no time to innovate? From a psychological perspective, the relationship between innovation and time is subtler and can be illustrated by someone who chose to innovate despite a lack of time.

Jeff Dean, an engineer at Google, saw a note on the wall from Larry Page saying, "These adds suck." Page was referring to their AdWords engine; it wasn’t working well. Dean worked on Search, so this wasn’t his problem, and he had a mountain of other stuff to do. Yet, he chose to drop everything and work through the weekend to grapple with this problem even though he was unsure he’d be able to fix it. What he did that weekend transformed the future of Google. His fix instantly increased accuracy by double digits; it led to further innovations which grew annual profits from $6m to $99m by the end of the year. A few years later, it was producing $160m a day — 90% of Google revenues.

First, he chose to take on a psychologically distant problem. Psychological distance is how far away something is in time, distance, or ownership. We tend to value and choose closer things than those further away. In Jeff’s case, he chose to focus on a problem that wasn’t his to solve instead of working on the many pressing challenges he faced personally. For most of us, psychological distance causes us to persistently choose activities with short term payoffs, over those with longer term impact. This preference is reinforced by time pressure. So, we choose the many daily tasks, over the few big opportunities to innovate, and we do this every day.

Second, he took on a task with uncertain payoff: he didn’t know he could fix it. In a famous example from Amos Tversky and Daniel Kahneman, people were asked whether they would prefer $30 or an opportunity to win more money: an 80% chance of getting $45 (meaning a 20% chance of getting nothing). Most people (78%) chose the $30 even though we recognize the best choice, statistically, is the latter. We have a bias for certainty, that means we will – especially when facing time pressure – choose activities with certain payoffs over those with uncertain results, such as trial-and-error experiments.

The real killer for innovation as we enter the Fourth Industrial Revolution is not that we don’t have the time. It’s just that our well-meaning efficiency means we choose immediate and certain payoffs over longer term, potential prospects. Creativity is not a personality trait, and innovation is not an accident. They both start with the decision to focus attention and imagination on the problems that really matter and to do this despite the tsunami of daily tasks and distractions. They start with giving up on the excuse that "I haven’t got the time" and addressing our bias for surviving, rather than thriving tomorrow.

Relationships matter at work. Without strong relationships, people are unwilling to take the risks involved in innovation and unwilling to collaborate creatively. For example, one Harvard study found that strong working relationships across companies increased net income by 750% over 10 years. Yet in the Workfront study, when UK workers were asked to rate their colleagues like Uber drivers, they only rated them 3.65. They also questioned their productivity: while they saw themselves as being productive (7.84) they saw their colleagues (7.05) and their manager (6.61) as much less effective. These scores indicate, if anything, an erosion of relationships. Why might this be and what is the impact on innovation?

In a famous study, trainee priests were asked to walk across town to give a sermon on the ‘Good Samaritan’ (a story about helping a stranger). As the priests walked across town, they encountered someone who had collapsed on the street. Did they stop to help? When the trainees had plenty of time, 63% stopped. When they were in a hurry, only 10% stopped. It’s not that these trainees became instantly selfish. It’s just that when under time pressure, when feeling overloaded, we choose for personal productivity over helping others. We become more focused on efficiency and expediency. It makes us less likely to collaborate, less interested in others, and less willing to seek diverse perspectives (or any other perspectives at all). 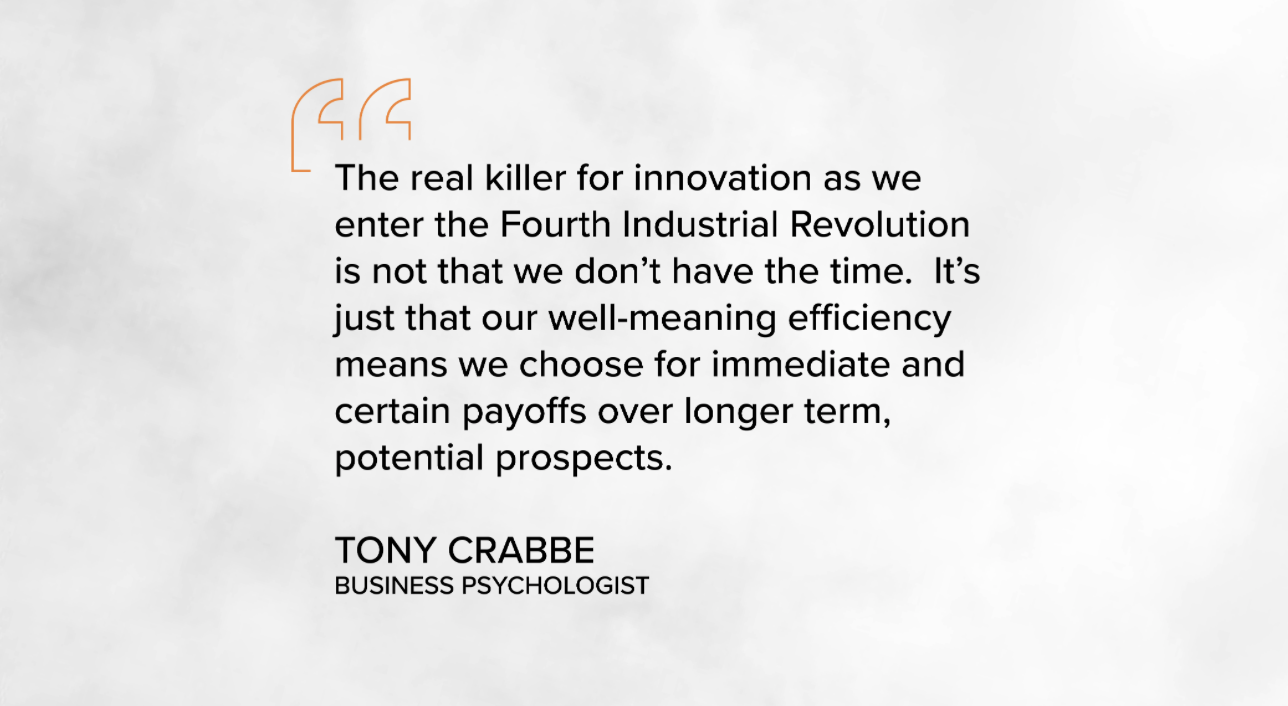 Karen Sobel Lojeski has noted the growth of a phenomenon she calls virtual distance. This is a by-product of our ever-increasing efficiency of communication. We prefer IM over email, email over phone calls, and phone calls over meetings. Virtual distance is the impact on relationships when communication is primarily digital. Even when we work together in the same building, it’s often easier and quicker to communicate with IM or email than to devote the time for a face-to-face meeting or a fuller conversation. We get "straight down to business" rather than spend a few moments connecting as people. Yet her studies show that when virtual distance is high, there is an 83% drop in trust, and a 90% drop in innovation.

Relationships require time. They require conversation. They are not efficient, but they do lead to more effective organizations. In fact, when Bank of America synchronized coffee breaks, to encourage more casual conversations and small talk, their profits rose by $15M. When Kevin Dunbar studied innovation in science, he found that the vast majority of breakthroughs didn’t happen in the lab, they happened when people talked, informally over a coffee. Relationships also help us extract the full innovative power of diversity too. We know that 83% of LGBT individuals, 66% of women, and even 45% of the most advantaged of all groups (white males) feel the need to cover up parts of their identity, due to a lack of trust in their colleagues. Without trusting relationships, we feel unable to bring the full force of our individuality into our team discussions, and our discussions are then less inspiring and insightful.

For too long, we have said "It’s only business!" — as if business is a completely rational activity. It’s not. It’s messy, emotional and social. Business is a deeply human activity, as is the innovation process. In allowing the time for relationships and conversations into our work we re-insert the creative power of humanity back into our organizations.

The Tension of the Paradox

The Fourth Industrial Paradox is a challenge all organizations must address. The natural ways we cope with the demands of exponentially increasing information and communication tend to undermine our ability to innovate. The answer, clearly, is not to be found simply in ever-more productivity — nor in unbridled inefficiency, experimentation, and conversation. Our success as organizations will depend on our ability to navigate the tensions between efficient production and inefficient experimentation,between focusing meetings and encouraging wild and meandering conversations, and between getting stuff done like machines and being like humans.