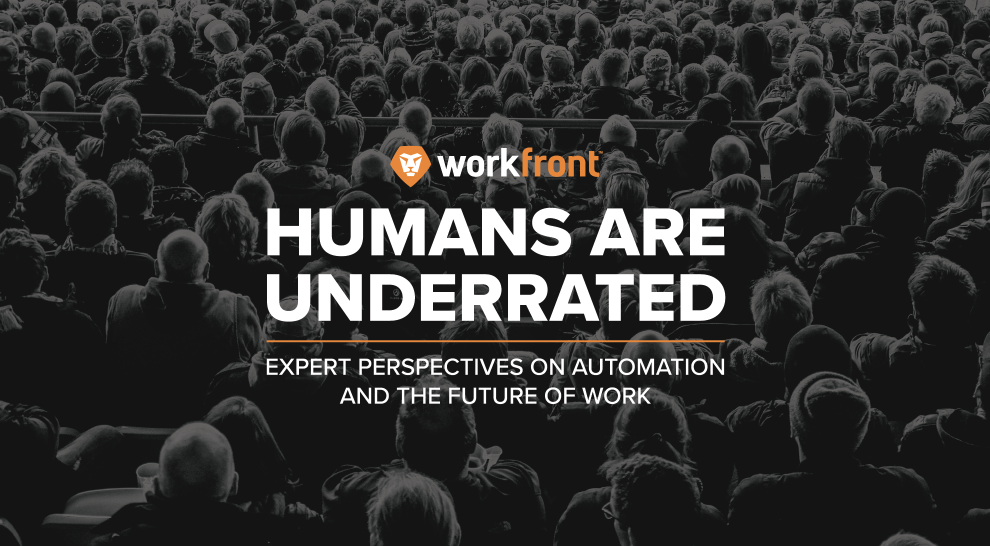 Humans are Underrated: Expert Perspectives on Automation and the Future of Work

“Yes, excessive automation at Tesla was a mistake. To be precise, my mistake. Humans are underrated,” said Elon Musk back in April, describing the company’s inability to hit weekly production targets for their Model 3 vehicles, resulting in a significant production shortfall.

Musk was forced to take direct control of the production line, pulling all nighters and even sleeping at the factory. “We had this crazy, complex network of conveyor belts … And it was not working, so we got rid of that whole thing.” Humans to the rescue.

And how did backing off of the automation and relying more on human efforts work out for Tesla?

Well even in the midst of an FBI investigation about whether Tesla misstated information about Model 3 production, and after a lawsuit from the Securities and Exchange Commission over comments Musk made on Twitter, plus a probe from the Department of Justice, Tesla’s stock went up more than 25%.

“Ultimately, given difficulties that we did not foresee in this first-of-its-kind production ramp,” says a Tesla spokesman, “it took us six months longer than we expected to meet our 5,000 unit per week guidance. Tesla’s philosophy has always been to set truthful targets – not sandbagged targets that we would definitely exceed and not unrealistic targets that we could never meet.” And along the way, the company learned important lessons about human capacity and efficacy.

This is good news for those concerned about the long-term consequences of artificial intelligence and automation. We at Workfront have long taken an optimistic view of the future, arguing that the more we can turn over mindless and repetitive work to machines, the more we can harness our uniquely human abilities.

“We are currently going through one of those periodic phases of ‘automation anxiety’ when we become convinced that the robots are coming for our jobs,” writes John Naughton in The Guardian. “These fears are routinely pooh-poohed by historians and economists.”

On the historian side, Naughton points to a patent case from the late 16th century, when Queen Elizabeth I refused to grant a patent on a knitting machine, on the grounds that it would take work away from those who knitted by hand. The machine, known as a stocking frame, increased a knitter’s productivity ten-fold, from an average of 100 stitches per minute to 1,000 stitches per minute.

As for the economists, Naughton says, while they concede “that machines do indeed destroy some jobs, they point out that the increased productivity that they enable has generally created more new jobs (and industries) than they displaced.”

This was certainly the case with bank tellers. According to MIT’s David Autor, writing in the Journal of Economic Perspectives, the arrival of the ATM in the 1970s did not render them obsolete, as many predicted. While the number of tellers at each branch did indeed decline, it turns out that ATMs made it cheaper to run a branch, which meant banks were able to open up more branches, leading to an overall increase in tellers. And it changed the nature of the job, from simply dispensing and receiving cash (a task a machine could easily do), to higher-level customer service functions like selling loans and mortgages.

What About White Collar Automation?

Technology doom-mongers love to point out that while in the past, it was always low-skilled work being replaced by factory automation, artificial intelligence is now poised to threaten middle-class and white-collar jobs too.

Autor described a similar fear in the 1960s that led to President Lyndon B. Johnson creating a “Blue-Ribbon National Commission on Technology, Automation, and Economic Progress” to confront the possibility that productivity was rising so fast it could outstrip the demand for labor. The panel’s conclusion?

“The general level of demand for goods and services is by far the most important factor determining how many are affected, how long they stay unemployed, and how hard it is for new entrants to the labor market to find jobs. The basic fact is that technology eliminates jobs, not work.”

Despite this claim, the Commission was concerned enough about the potential upheaval of displacing a large number of individuals into new types of work that they suggested a “guaranteed minimum income for each family.” (Betcha didn’t know the universal basic income debate goes back that far.) Obviously, that didn’t happen. But it’s clear that automation anxiety is nothing new.

“Automation does indeed substitute for labor—as it is typically intended to do,” Autor writes. “However… journalists and even expert commentators tend to overstate the extent of machine substitution for human labor and ignore the strong complementarities between automation and labor that increase productivity, raise earnings, and augment demand for labor.”

It doesn’t seem that the average knowledge worker shares the bleak view of the journalists and commentators Autor refers to. In Workfront’s 2018 State of Work Report, we surveyed nearly 2,000 knowledge workers and found that, despite the fact that 48% of respondents know someone personally who has lost a job to automation, today’s white collar workers are generally optimistic:

Only a third of those surveyed say they’re concerned that men and women in their line of work will be competing with robots, machines, and AI for jobs in the not-so-distant future. Similarly, only a third believe there will come a day when “we’ll no longer have to work to meet our basic needs” because automation will do that for us. (Although Millennials and Baby Boomers see that last stat differently, with 44% of the former and 26% of the latter believing work itself will one day be obsolete.)

Raising the Value of Tasks

At Workfront, we look at work holistically, focusing on the complete DNA of Work. Not just projects. Not just tasks. But the total lifecycle of all work, including workflows, assignments, content, and collaboration. Because we provide an operational system of record that integrates and connects the enterprise vertically and horizontally, we intuitively understand the value of automation. We see its effects firsthand every day.

For just one example, the digital marketing company Leapfrog used Workfront to reduce the time it took to create a new project by 94%, thanks to standardized and automated workflows.

This is a prime example of an “an economic reality that is as fundamental as it is overlooked,” Autor says, which is: “tasks that cannot be substituted by automation are generally complemented by it.”

In Leapfrog’s case, the creation of a new project cannot be done entirely by automation—AI cannot decide what needs to be done or by when. But it certainly augments the process of setting up the project, finding and assigning available resources, and managing the details from inception to completion.

While the reduction of manual, repetitive work that Autor mentions is an obvious benefit of automation that’s easy to directly observe, it’s not as apparent how automation manages to simultaneously “amplify” our efforts and raise the economic value of the tasks that are left in human hands.

To explain how this works, Autor looks to the O-ring theory of economic development from Michael Kremer, which was named after the Challenger space shuttle disaster. The theory argues that the failure of any one step in the chain of production can cause the entire production process to fail, much like the infamous O-ring gasket that failed to seal the Challenger’s right rocket booster. Conversely, Autor says, improving the speed or reliability of any given link will increase the value of improvements in all of the others.

“Analogously, when automation or computerization makes some steps in a work process more reliable, cheaper, or faster, this increases the value of the remaining human links in the production chain,” Autor concludes.

That a billionaire tech giant would think to say such a thing is a symptom of the age of automation anxiety we’re currently living through. Seen from a certain technological perspective, humans have long been overrated—barely more than a productivity problem to be solved. We are slow, lumbering, inconsistent, and replaceable at certain kinds of tasks, the very tasks that are ripe for automation.

But on the other hand, “the challenges to substituting machines for workers in tasks requiring flexibility, judgment, and common sense remain immense,” says Autor. He continues:

“Most work processes draw upon a multifaceted set of inputs: labor and capital; brains and brawn; creativity and rote repetition; technical mastery and intuitive judgment; perspiration and inspiration; adherence to rules and judicious application of discretion. Typically, these inputs each play essential roles; that is, improvements in one do not obviate the need for the other. If so, productivity improvements in one set of tasks almost necessarily increase the economic value of the remaining tasks.”

That ought to give the anxious some measure of comfort. As should the story of 16th century knitters and 1970s bank tellers. As should the O-ring production function theory. Rather than replacing us wholesale, automation has a tendency to make us more productive and valuable—and not solely by standing in contrast to the limits of excessive automation, as Tesla painfully learned. When we improve the productivity or consistency of one aspect of our work, it turns out we increase the value of everything else we do as well.