Ever feel annoyed by coworkers who share hilarious cat videos when they should be working? Don’t be. A paper published in the Journal of Business and Psychology shows that being exposed to something funny at work can actually make you more productive.

But all the productivity-boosting cat videos in the world can’t explain the following puzzling statistic. Over the past 5 years that we’ve been surveying modern knowledge workers for our State of Work report, there’s one number that has remained relatively stable. Year after year, enterprise employees report that more than half of each workday is taken up by things other than their real work. According to the latest figures, 56% of our time goes to emails, administrative tasks, meetings, interruptions, and everything else, leaving just 44% of our time for “the primary duties” of our jobs.

As much as I love Surprised Kitty — arguably YouTube’s most viral cat video ever, with 78 million views — I doubt we’re all watching it enough to add up to more than 20 hours per week, per employee. So what’s going on? Here are the top four reasons I think we’re spending only 17.6 hours per week on the jobs we were hired to do.

1. We’re Getting Bogged Down in Shadow Work

Workfront CEO Alex Shootman likes to use the term “shadow work” for all of those tasks that keep us occupied without contributing to our strategic objectives. According to our State of Work survey, the top five tasks that fall into this category include: 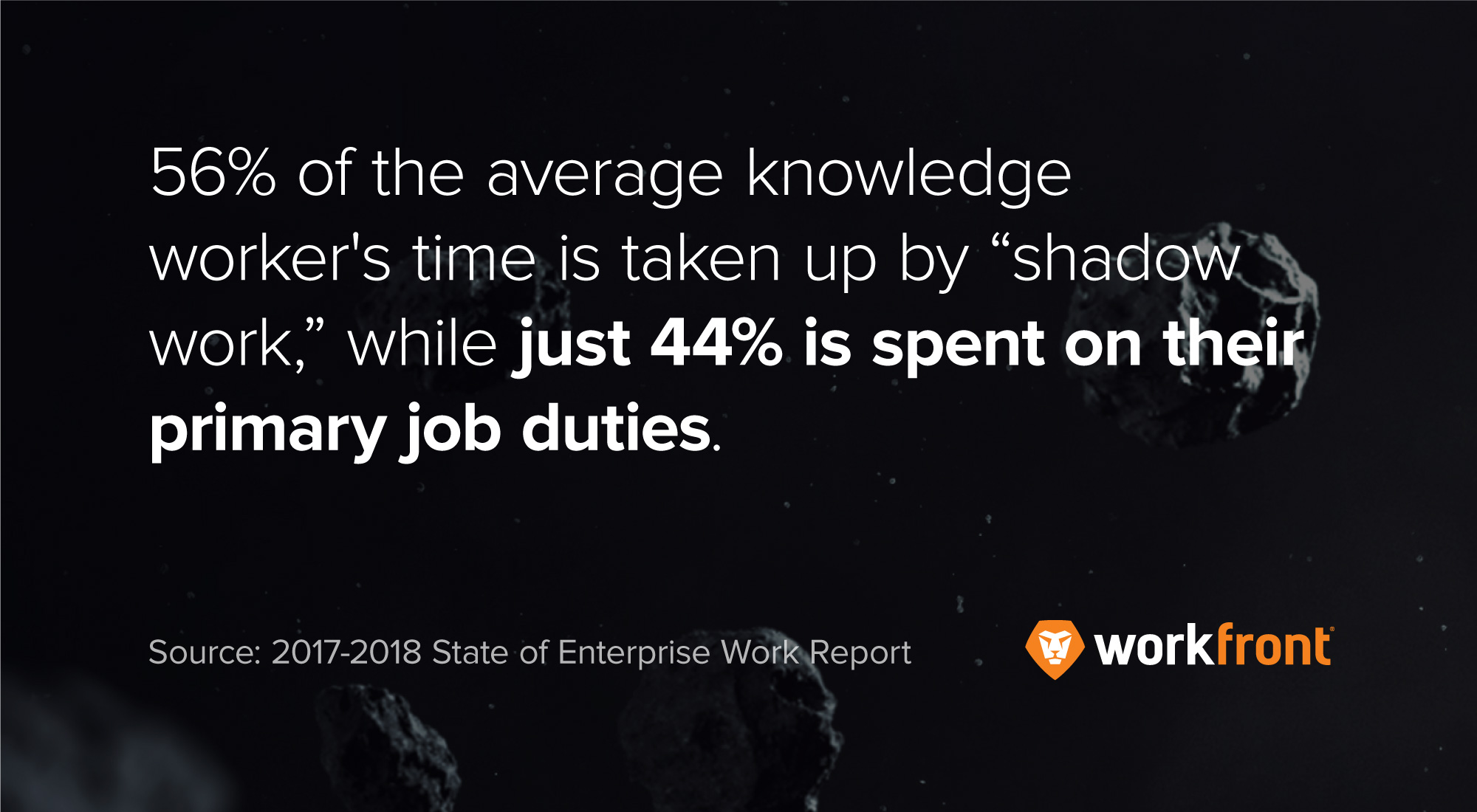 These are all legitimate problems, and they’re not the only distractions we’re forced to deal with in this age of digital transformation. But I don’t believe shadow work accounts for the entire 22.4 hours per week that we are being pulled away from our most important priorities. Here are a few other culprits.

2. Our Job Descriptions Are Probably Wrong

“Even though most people who get jobs are recruited to a job description — which helps them decide if they want the job and can do it — it’s often the last time the job description is ever discussed,” say John Parikhal and Philippe Denichaud, business consultants who helped engineer the successful organizational re-invention of Viacom’s VH1.

There are several ways job descriptions can contribute to the widespread perception that most of our time is devoted to work we were not hired to do:

What’s the big deal, you may be asking? As long as you know what you’re doing, and everyone else knows what they’re doing, why does it matter? Well, according to Parikhal and Denichaud, “It’s very easy for the person doing the job to start deciding to change how they do the job as well as how they grow in the job—without referencing any of these changes with the manager.”

If what you think you should be doing doesn’t match what your boss thinks you should be doing, that could explain why you keep getting assigned tasks that feel outside your realm of responsibility. You may find you could shift a few hours per week into the “real work” category simply by working with your manager to update your job description so it accurately reflects your day-to-day duties as well as your boss’s expectations. Bonus: this exercise could open your boss’s eyes to the full scope of your job, earning you some well-deserved kudos or putting you on the path to a promotion.

3. Some Things Actually ARE Our Real Jobs

I have a Creative Director friend who spent at least a decade as a graphic designer before moving into his current role. Because he was promoted internally in his company instead of being hired from the outside, and his was a newly created role vs. a backfill, he was never given a job description. At first, he felt guilty about all the time he was spending dealing with people problems instead of solving design problems. He felt like all the one-on-ones and team oversight duties were getting in the way of his hands-on design work—until he realized that the mentoring, reviewing, process building, and people management were his real job now. He needed to give them the weight they deserved before he could let go of the guilt and resentment that surrounded those tasks.

Even if you don’t have “director” or “manager” in your job title, or any direct reports to speak of, if you are collaborating with other teams on work that you are leading, you automatically become the manager of that work and the people. I call myself a certified cat herder. A lot of the work that happens in my realm depends on other people to help get it across the finish line. So in a lot of ways, I wind up managing those people and checking in on the status to make sure it is finished on time.

What are some of the things you’re doing reluctantly now (like people management or project management) that belong in your real work category? On the flip side, what are some things you might be guiltily avoiding because you think they don’t count as valid responsibilities?

Here’s an example. As a PR professional, I really should be reading my top 10-20 reporters’ pieces on a daily basis, so I know what’s trending in their worlds and what’s catching their attention. I should be re-tweeting and commenting on their articles regularly. This is not something that would ever appear in my job description. I might even undervalue the importance of doing this, because it doesn’t move any of my more concrete projects forward, but the truth is, this is part of my job. It’s important. And I should make sure I count it in the right column.

4. We May Not Be Speaking Up Enough

Earlier in my career, I worked for someone who saw my role very differently than I saw it. He was a good person who meant well, but he devalued my experience and education by asking me to do things like pick up his dry cleaning or make his hair appointments. I was never invited to meet with the PR firm, provide feedback on commercials we were doing, or even attend the shoots for those commercials. It felt like what he really wanted was a personal assistant, but he couldn’t get the job request approved. So he hired a PR person and just treated me like a PA instead.

In hindsight, I wish I had spoken up sooner and more often, but I was young and really needed the job. It somehow felt selfish to voice my dissatisfaction and concerns. I realize now that being more vocal wouldn’t have just helped me; it would have also allowed the organization to benefit more fully from my true skills and abilities—not that I’m not awesome at booking hair appointments, of course.

This is a clear example of a situation where I should have said something. It’s not always so obvious, and there’s a fine line to walk. If something is definitely not in your wheelhouse, it’s okay to say, “Hey, thanks for thinking of me for this task, but this falls more into the realm of this other person or team.” On the other hand, I also think being a team player is important. If I’m asked to do something that’s close enough to my skill set, and it’s a quick task, I always pitch in and help. I err on the side of saying yes whenever I realistically can.

As long as you’re speaking up about inappropriately assigned tasks when you need to, remember that pitching in on cross-functional teams and accepting one-off task requests do count as “real work,” especially as the Hollywood model of work continues to catch on in the modern workplace. These are exactly the kinds of projects that will never appear in a job description, but they can be perfect opportunities to gain valuable experience, attract the attention of other teams, and contribute to your organization’s top strategic objectives. 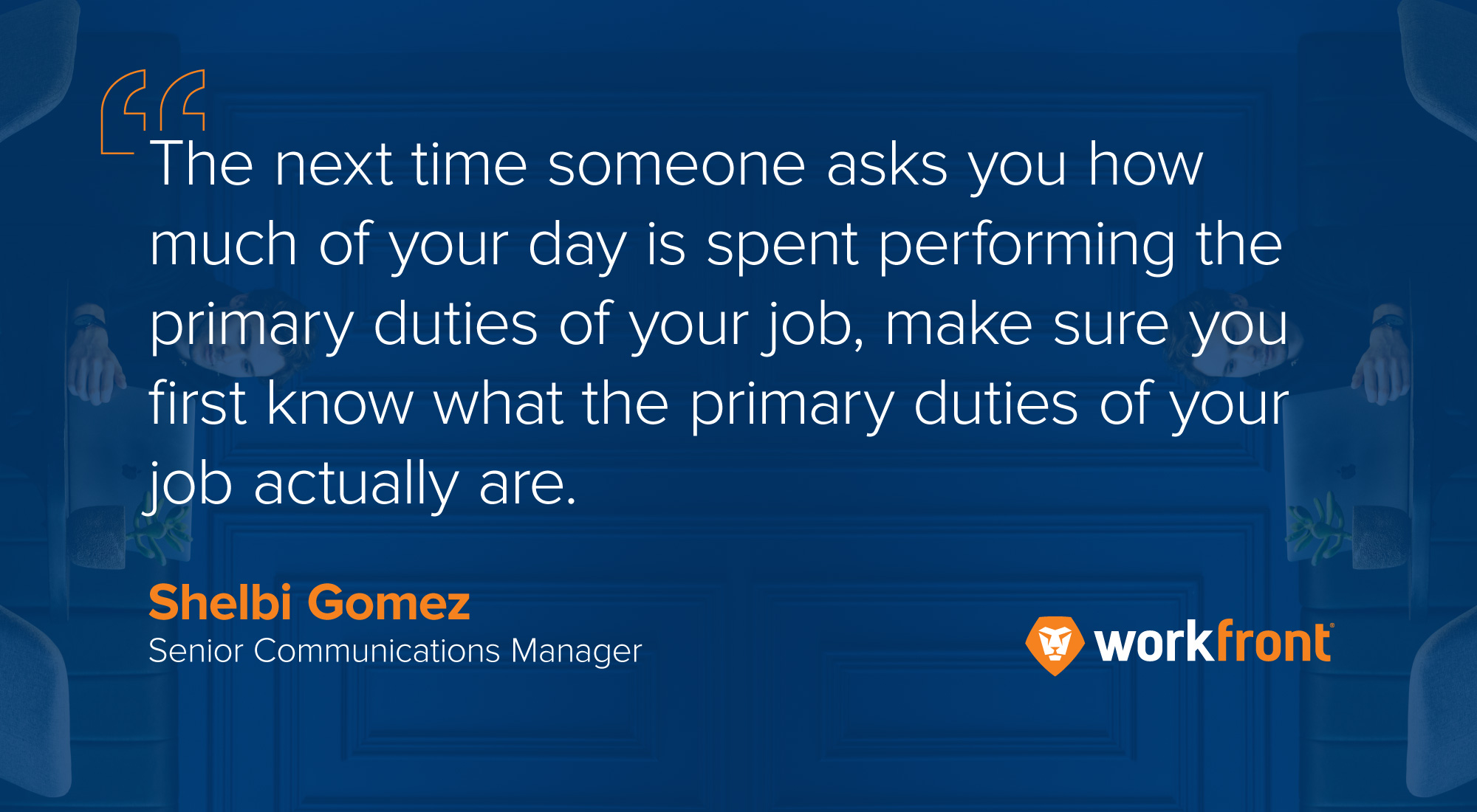 Expanding the Definition of Real Work

The next time someone asks you how much of your day is spent performing the primary duties of your job, make sure you first know what the primary duties of your job actually are. (Updating your job description with your manager is a great way to do that.) Then take a hard look at those tasks, like people management or industry awareness, that you tend to count outside the realm of your real work, and make sure you’re putting them in the correct column.

If after all of that, you still find you’re being asked to do things that don’t fit your skills or your role, speak up. All of these things will help you make a much more accurate accounting of the shadow work that dominates your workday. You may find you’re more focused and productive than you thought. But if you still need a momentary boost, here’s a cat in a shark costume chasing a baby duck while riding a Roomba. You’re welcome.