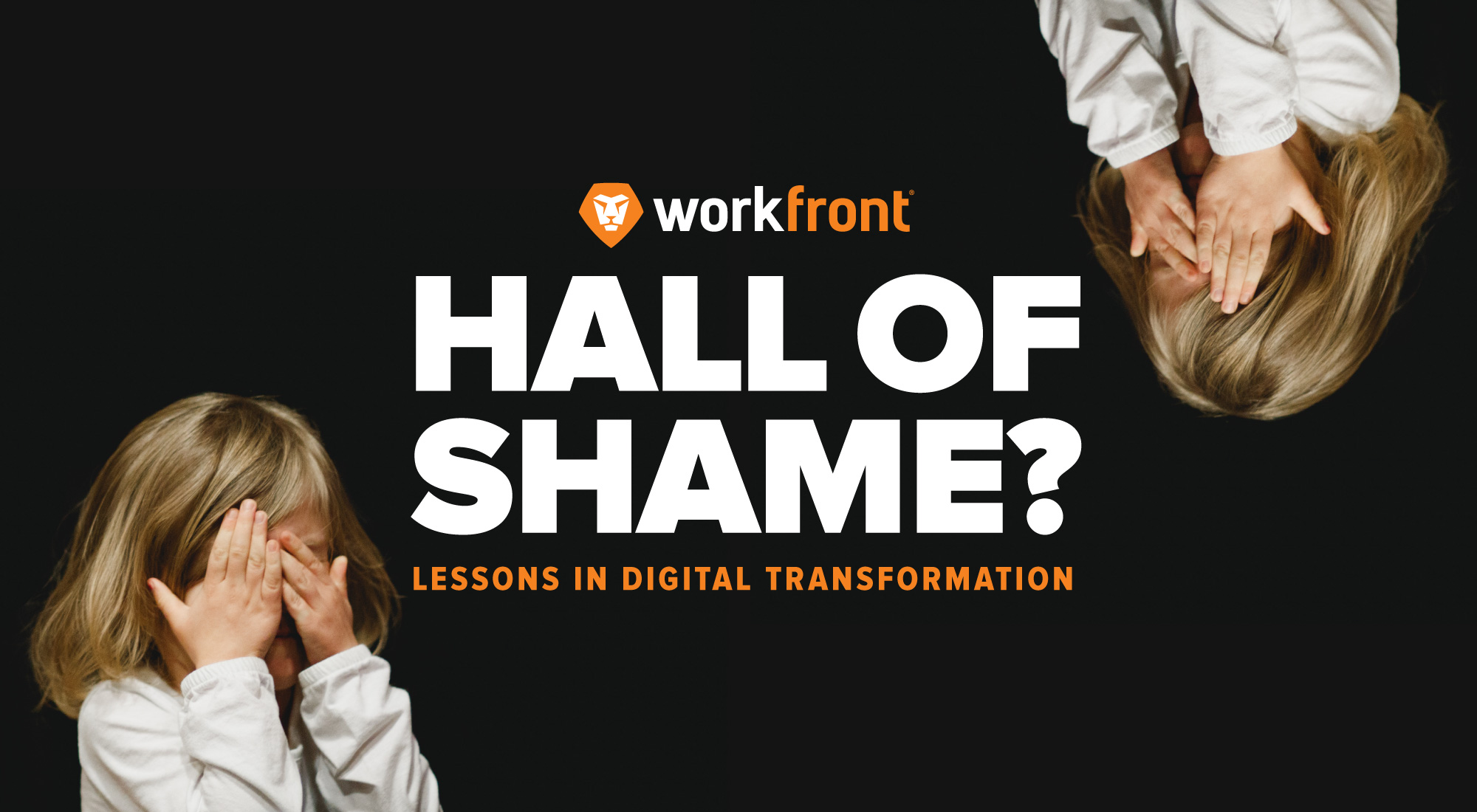 By Heather Hurst, Senior Director of Corporate Marketing at Workfront

When a business fails, outside observers (such as myself) love to speculate about “the reason” things went south. Kodak tanked because they didn’t embrace the digital camera. TiVo’s Achilles heel was internal complacency. Blockbuster fell apart because they remained committed to the brick-and-mortar rental model in the face of cable and digital disruption. The failure of the Windows Phone was a culture issue.

If we can boil the complexity of a giant corporation’s demise down to one simple problem, then we can avoid a similar fate ourselves, right? Well the truth is never as simple and one-dimensional as the sound bites above would suggest.

The same phenomenon occurs when companies succeed. Apple’s success is because of product simplicity. Or brilliant advertising. Or constant evolution. Do those three simple things, and you’ll have the next Apple!

However, there is one thing all of these examples, good and bad, do have in common. It’s a little two-word phrase that affects everything in the world of modern work: digital transformation. The companies that do it successfully make it through. The companies that don’t, well, take a look at what happens.

It turns out Kodak did embrace the digital revolution. It was a Kodak engineer, Steve Sasson, who created the very first prototype of a digital camera in 1975. Kodak eventually invested billions in the creation of a range of digital cameras, the first of which attempted to match the quality of film right off the bat, resulting in a $20,000 price tag on the DSC-100. Obviously, that approach wasn’t sustainable. As Scott Anthony argues in Harvard Business Review, “Kodak ultimately embraced simplicity, carving out a strong market position with technologies that made it easy to move pictures from cameras to computers.”

Kodak also tried to tap into the online photo-sharing trend by purchasing Ofoto in 2001. They could have been the pre-Instagram, but unfortunately, “Kodak used Ofoto to try to get more people to print digital images.”

That’s the subtle lesson that reveals what really went wrong. “Where they failed was in realizing that online photo sharing was the new business, not just a way to expand the printing business,” concludes Anthony.

Kodak saw digital changes on the horizon, and embraced them in a limited way, all while resting their hopes on a core business that continued to shrink. They didn’t go all in. In an analysis of the reasons why high-profile digital transformations fail, Thomas H. Davenport and George Westerman wrote: “Digital transformation is an ongoing process of changing the way you do business. It requires foundational investments in skills, projects, infrastructure, and, often, in cleaning up IT systems. It requires mixing people, machines, and business processes, with all of the messiness that entails.” Kodak didn’t do that. Will you?

Keep in mind that the fruits of digital transformation itself can help with your own internal digital transformation. What do I mean by that? A modern operational system of record like Workfront has the technological chops to do exactly what Davenport and Westerman suggest is needed: clean up systems, get people on the same page, and streamline business processes in a centralized system that provides unparalleled transparency and control at all levels of the business. Of course, no software solution is a magic bullet; you get out what you put in. But given how high the stakes are in this age of digital transformation, we need all the help we can get.

Having said all of that, it's worth noting that Kodak did sell their imaging patents for $525 million, which is a big success in its own right.

I have fond memories of wandering the aisles of my local Blockbuster, trying to find a movie to rent on a Saturday night. The very act of perusing and selecting was half the point and took nearly as long as it took to watch the movie itself. That same process occurs today, but from the comfort of my sofa, with remote control in hand.

Poor Blockbuster. Things didn’t have to be this way. Compare the franchise to Netflix, which started as a mail-order DVD service, and which I also partook of. But Netflix didn’t stick to the red-envelope model. They streamed. And adapted. And they now produce original content that has disrupted even big Hollywood studios.

Would you believe that Blockbuster’s actual demise had less to do with Netflix—which Blockbuster had an opportunity to purchase in 2000 for $51 million and declined—than with internal infighting because of an activist shareholder?

Blockbuster’s CEO at the time, John Antioco, was planning to spend $200 million to launch Blockbuster online and another $200 million to eliminate late fees, which were a major customer irritant and also a giant source of revenue. But Viacom, who owned 80% of Blockbuster, balked at these changes and sold its stake in the company, which made Blockbuster vulnerable to an activist investor named Carl Icahn.

According to Antioco, Icahn’s faction on the board “questioned our strategy, which focused on growing an online business and finding new ways to satisfy customers, like getting rid of late fees. We presented data demonstrating that franchisees that had dropped late fees were outperforming those that retained them, but they remained unmoved.” The stalemate eventually let to Antioco’s departure, and we all know what happened next.

“I firmly believe that if our online strategy had not been essentially abandoned, Blockbuster Online would have 10 million subscribers today, and we’d be rivaling Netflix for the leadership position in the internet downloading business,” Antioco concludes.

Digital transformations are tricky to lead, especially when there’s a lack of internal unity about mission, vision, and goals. Davenport and Westerman acknowledge this as a major reason such change initiatives fail. “Most leaders don’t know how to lead a digital transformation,” they conclude. “Many work to enable others in their organizations, but this often results disjointed, independent, tactical initiatives, which are costly and go nowhere, creating bad blood inside and outside the organization. To be successful, digital platforms need to be unified across the organization, spanning every division, product, service and supplier. Doing this takes real leadership and board support.” Unfortunately, Blockbuster was sorely lacking in the latter. 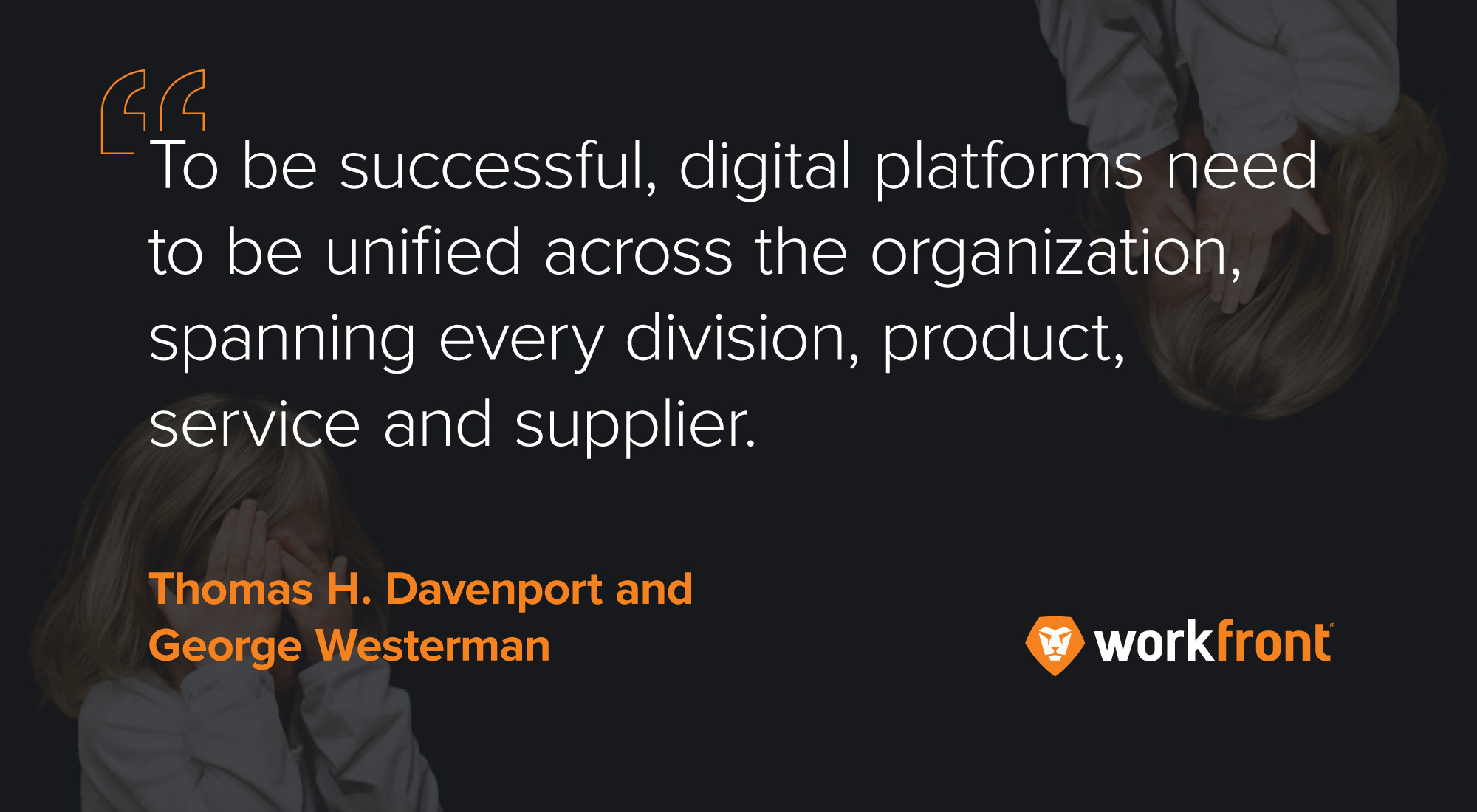 In your organization, there may not be much you can do about board support, but you may be able to influence the unified use of the right digital platforms in your own sphere of influence.

In 2007, Microsoft’s then-CEO famously told a USA Today reporter, “There's no chance that the iPhone is going to get any significant market share. No chance. It's a $500 subsidized item. They may make a lot of money. But if you actually take a look at the 1.3 billion phones that get sold, I'd prefer to have our software in 60% or 70% or 80% of them, than I would to have 2% or 3%, which is what Apple might get.”

A decade later, Apple’s iPhone hovers around a 15 percent global market share, while Microsoft killed its Windows Phone at the end of 2017, after it hit a rock bottom 0.1 percent market share.

What happened? The details, as always, are complex. But many analysts suggest that the problem Microsoft had for a few years there was an arrogance born of past successes that led them to double down on things that weren’t working. Need proof of the hubris? To promote the release of the Windows Phone 7, employees staged a mock funeral for their iPhone and Blackberry rivals in 2010, complete with hearses, mourning garb, bagpipers, and Darth Vader on a motorcycle. (Yes, really.)

The lesson has seemingly hit home, with current (non-arrogant) CEO Sataya Nadella saying in a recent employee memo: "In order to deliver the experiences our customers need for the mobile-first and cloud-first world, we will modernize our engineering processes to be customer-obsessed, data-driven, speed-oriented and quality-focused."

And how’s that working out? Microsoft’s stock hit an all-time high earlier this year. Nadella has also said artificial intelligence will feature into the company’s future plans in a big way. Everybody loves a good comeback story.

Davenport and Westerman have something to say about this too: “When digital investments don’t quickly pay off, CEOs…can fear that reducing a highly public commitment to the new business could be seen as failure rather than smart decision-making. They may double down on their chosen strategy rather than pivoting toward the profitable approach, hoping to bully the market rather than learn about it.”

Microsoft’s old leadership doubled down to their detriment, but the current leaders are clearly pivoting profitably today. Of course the ability to pivot at all requires an internal top-to-bottom agility that many organizations lack. Investing in modern work management solutions will make your organization more responsive and adaptive, no matter what surprises the future brings. And surprises there will definitely be.

Even if your product or service itself isn’t threatened by digitization in the same way that camera film and DVD rentals were, the digital revolution means all modern work is moving more quickly, and it’s more connected, and the old ways of doing things aren’t working anymore.

Don’t let that be “the reason” your competitors stage a mock funeral for your business—with or without Darth Vader.