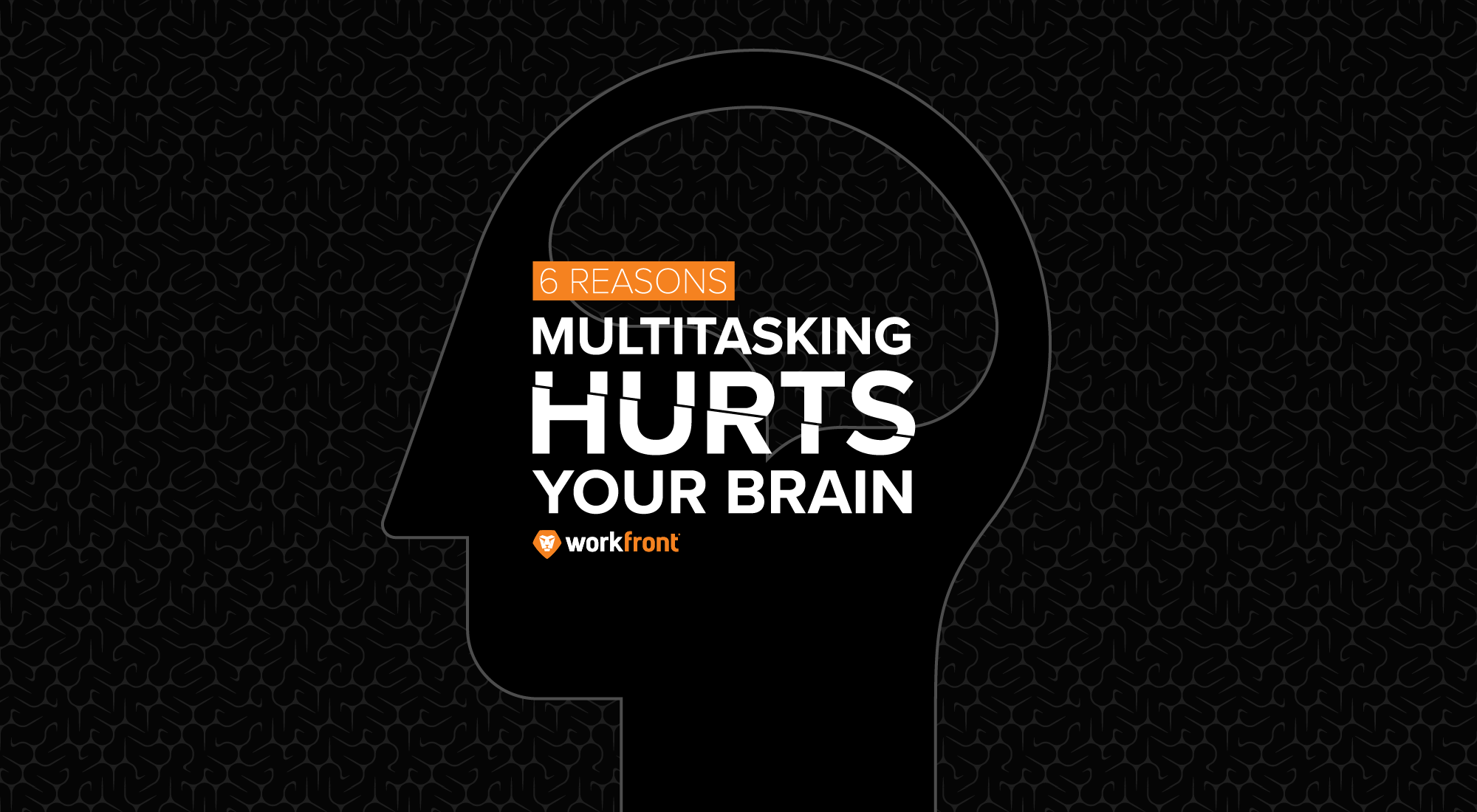 There’s a scene in Arrested Development where an unconventional couple discusses the possibility of an open relationship. Tobias, a former therapist, mentions he had counseled couples in exactly that situation. His wife, Lindsay, asks, “Well, did it work for those people?”

Tobias replies: “No, it never does. I mean, these people somehow delude themselves into thinking it might, but... but it might work for us.”

I feel the same way about multitasking at work. As much as we’ve heard that multitasking doesn’t work, and that it’s not even a thing (task switching is a better term), many of us still believe that we are somehow the exception. We convince ourselves that the constant jumping between email, texting, IM tools, and desktop and mobile notifications are working just fine for us. That it’s okay for us to listen to a podcast while writing a report, or to check email during a meeting, or to read The Huffington Post while jogging.

The fact that this kind of multitasking is even an option is a relatively new phenomenon. We used to have no choice but to do one thing at a time, because everything took so much more concentration and effort. Think writing a letter with a quill pen and a pot of ink. Washing laundry by hand. Driving an automobile without power steering or an automatic transmission. Checking email on a desktop computer before web-based email existed.

In a nutshell, our brains have adapted over centuries to be really great at doing one thing at a time. And experts say we’re not very well-equipped for The Age of Interruption we live in today.

Just for kicks, check out this 1991 RadioShack ad. Everything on it can now be done on our smartphones, which are always with us, constantly inviting us to do all the things, all at the same time. Here are six good reasons why we should consciously resist that urge.

1. Multitasking Is an Illusion

MIT neuroscientist Earl Miller, who is an expert on divided attention, has said that our brains are “not wired to multitask well… When people think they’re multitasking, they’re actually just switching from one task to another very rapidly. And every time they do, there’s a cognitive cost in doing so.”

Tasks take longer and we make more errors when we switch between them rather than tackling them one at a time. And if the tasks are complex, these effects are magnified. Even if each task switch takes only 1/10th of a second, it can add up to a 40% loss in productivity.

Here’s one way to combat the problem of constantly divided attention at work: find comprehensive software solutions that can help you offload some of your standalone tools, so you’re not toggling between multiple disconnected interfaces throughout the day. Modern work management tools can absorb task management, budgeting, time tracking, communication and collaboration, proofing, data and asset storage, reporting, and more.

“Multitasking has been found to increase the production of the stress hormone cortisol as well as the fight-or-flight hormone adrenaline, which can overstimulate your brain and cause mental fog or scrambled thinking,” writes Daniel J. Levitin, author of The Organized Mind: Thinking Straight in the Age of Information Overload.

When we’re multitasking, we might think we’re keeping a lot of balls in the air like an expert juggler, Levitin says, but we’re more like an amateur plate spinner, “frantically switching from one task to another, ignoring the one that is not right in front of us but worried it will come crashing down any minute.”

Isn’t it a relief to know that something as simple as deliberately focusing on one thing at a time can help us feel less stress, think more clearly, and be more productive? Sounds like a win-win-win to me.

Writing in Inc.com, tech CEO Larry Kim says, “When we complete a tiny task (sending an email, answering a text message, posting a tweet), we are hit with a dollop of dopamine, our reward hormone. Our brains love that dopamine, and so we're encouraged to keep switching between small mini-tasks that give us instant gratification.”

So what’s the problem? Kim says it creates a “dangerous feedback loop” that makes us feel like we’re accomplishing a ton, when we may not be doing much at all. He says some refer to email/Twitter/Facebook-checking as “a neural addiction.”

Whether we realize it or not, this effect is being exploited by the social platforms we use the most. Former Facebook executive Chamath Palihapitiya stopped using the platform himself and won’t let his children use it either. In a talk for the Stanford Graduate School of Business, Palihapitiya offered this ominous warning:

“You don’t realize it, but you are being programmed. It was unintentional, but now you gotta decide how much you’re willing to give up, how much of your intellectual independence.”

Yikes. In the world we live in, multi-tasking is the path of least resistance. It’s what we all do unless we consciously try not to. And when I think of multitasking as an addictive behavior that may actually be reprogramming my mind, I’m extra motivated to build time into my day for deeper focus, downtime, even a healthy amount of boredom.

When we read or learn without distraction, Poldrack says, new facts and ideas make their way into the hippocampus, which plays a critical role in processing, storing and recalling information. But when our attention is divided, new knowledge ends up in the striatum instead. This is where we store new procedures and skills; it’s a less flexible and more specialized area of the brain that isn’t as easy to access.

"The best thing you can do to improve your memory is to pay attention to the things you want to remember," Poldrack says. This advice may sound obvious, but it’s not easy to pay attention amid the constant digital distraction we face not only at work, but in every area of our lives.

5. Multitasking is Worse Than Marijuana

It turns out Willie Nelson and Snoop Dogg have been better off all these years, with their devotion to Mary Jane, than they would have been simply being distracted by their smartphones. In 2005, the BBC reported on a research study by the Institute of Psychiatry at the University of London that found, “Workers distracted by e-mail and phone calls suffer a fall in IQ more than twice that found in marijuana smokers.”

Keep in mind, that study was done two years before the release of the first iPhone. At the time, we were only dealing with a small fraction of the potential distractions we deal with today.

To top it all off, when we multitask, we greatly increase the number of decisions we have to make throughout the day, which can be mentally exhausting. Should I answer this IM right away or ignore it? How should I respond to this email? Should I copy anyone else on my reply? Is this an email I can delete or should I file it somewhere? How should I ask this question to my boss—via Slack, email, text, IM, a phone call, as a comment in a Google doc, or from my work management solution? Should I DM this person or post on a public thread?

“It turns out that decision-making is also very hard on your neural resources and that little decisions appear to take up as much energy as big ones,” Levitin writes. “One of the first things we lose is impulse control. This rapidly spirals into a depleted state in which, after making lots of insignificant decisions, we can end up making truly bad decisions about something important.”

To combat this, it’s helpful to make some decisions up front about how and where your team will communicate, and what your personal communication habits will be. For our team, the unspoken rule is that all communications that are project-specific and not urgent take place in Workfront, an Operational System of Record that collects the complete DNA of work in a centralized space. This way, all questions and collaboration around a project are archived alongside the relevant project details, deadlines, documents, and more. Urgent questions and global conversations that aren’t project-specific take place in Slack. If we’re not getting the responses we need from these first two avenues, we’ll resort to a text. These systems and protocols have greatly lessened my team’s reliance on email, which our new State of Work report reveals is the number one distraction that keeps the modern knowledge worker from focusing on their most important priorities.

As far as my personal habits, I do my best to carve out distraction-free time blocks, where I turn off all notifications so I can enjoy some depth of focus. I try to limit checking email to just a couple of focused sessions a day, and I do as much of my communicating within Workfront as I can. Katie George, Creative Services Traffic Manager for FOCUS Brands, has experienced similar benefits from streamlining her communication within a work management solution.

“When team members need to look up a past job or find artwork, Workfront search is so much easier than going through six months of email,” she says. And the laborious process of getting legal approval has been simplified enormously. Says Katie: “I simply go into document approvals and type in the name of our legal representative who is then automatically notified by Workfront that there is a request waiting for her.”

Because Katie and I have both made certain global decisions up front, we don’t have as many little decisions to make in the moment about where, how, and when to communicate. Not only does this save us time, it turns out it’s saving mental energy and preventing bad decision-making as well.

No, Multitasking Won't Work for You…

The studies have been done. The evidence is crystal clear. Multitasking at work is bad for our brains, it worsens decision-making, it stresses us out, and it makes it harder to learn and retain new information.

So why do we still do it?

Because it’s seductive. It’s the new default. And we all love to believe that we’re the exception. But unless we want The Age of Interruption to further alter our brains and shorten our attention spans, we have to deliberately narrow our attention to just one thing at a time. We have to turn off all the beeps and alerts that have us perpetually distracted. And we have to look for comprehensive software solutions that will minimize the number of tools we jump in and out of throughout the day, so we can carve out more time to focus deeply and get our real work done.