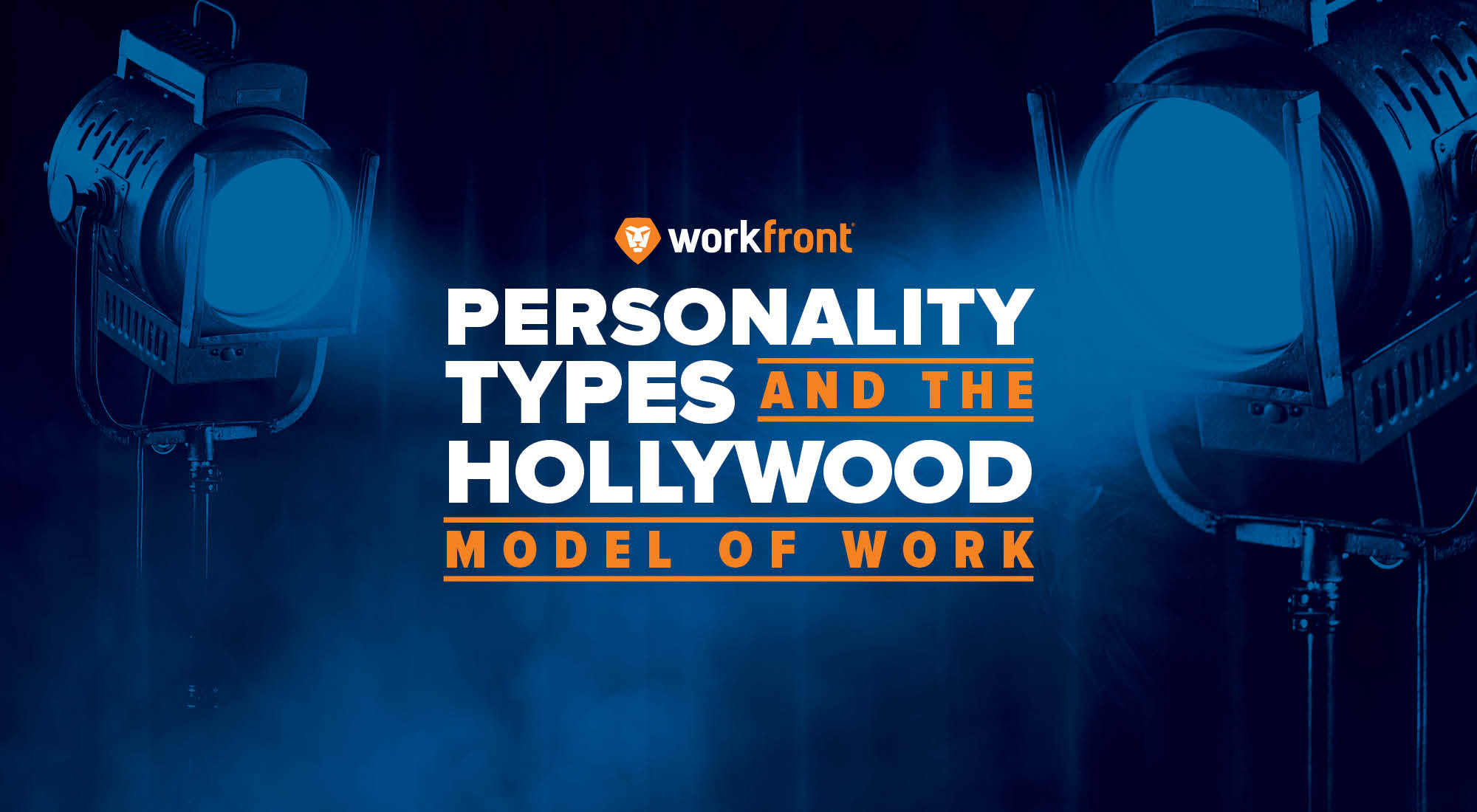 Personality Types and the Hollywood Model of Work

Do you sometimes wish you had a user’s manual for each of your colleagues, so you knew how best to communicate with them, what to say, what not to say, when to fight for an idea, when to back down? It’s hard enough to mesh personalities when you’ve worked with a team for years. It’s even harder when you have to get work done with people you barely know.

I wrote recently about personality type tests such as Discovery Insights, Myers-Briggs’ Type Indicator, DiSC and others—outlining the five reasons they’re still relevant in our age of digital transformation. They are designed to help us understand ourselves and each other, so we can work better together. Today I want to focus specifically on how the insights from these tests can be helpful with a very specific type of work, which Workfront CEO Alex Shootman likes to call the Hollywood Model. (No, it’s not like Gob’s “business model” from Arrested Development, but hats off to you if your mind went there.)

What is the Hollywood Model of Work?

The term, which I first encountered in this New York Times article, refers to ad hoc teams that organize around temporary projects, much like a cast and crew are assembled to work on a movie. When the production wraps up, everyone disbands and then regroups in different formulations for different films. That’s the norm now, although it wasn’t always. In what is often called the Golden Age of Hollywood, from the 1920s to the 1960s, the studio system kept creative personnel under long-term contracts with individual studios.

The world at large is now following Hollywood’s lead as work becomes more project-based and team-oriented, especially in consulting fields. Freelancing and contract work are also on the rise, with a recent survey by Upwork predicting that a majority of the U.S. workforce will be freelancing by 2027.

What does this mean for you?

In a nutshell, you’ll no longer have months, years, and decades to learn how to work with teams. Sometimes you’ll only have days or weeks to get into that productive groove, which is where personality type tests come in. Personality profiles offer instant insights into individual differences and team dynamics, allowing newly assembled work teams to hit the ground running—an absolute must in the Hollywood model of work.

In his WorkLife podcast, writer and Wharton professor Adam Grant (who authored Plan B with Sheryl Sandberg), recently interviewed several Bain & Company employees about how they use personality tools. Company leaders think personality is so important that new hires undergo personality training even before they learn how to do their jobs. And here’s why:

“The way we staff teams at Bain, we typically have anywhere from maybe five to seven people on a team,” said team leader Sarah Stewart, “and so the impact of that on us is that you're pretty regularly kicking off work with a new set of people you've never worked with before, and so figuring out how to understand them is really important and you have to do it pretty quickly.”

One principal at Bain, named Or Skolnik, has taken it as far as creating a one-page user manual for how to work with him. It’s written by people who have worked with him in the past. Every time he launches a project with new people, he hands everyone a copy of the sheet.

“I’m kind of stunned that every manager on earth doesn’t do it,” said Grant in response to the idea. “Those are things I would learn in six months of work with you anyway. Why would I not want to know them on day one?”

How to work well with strangers

I mentioned in my previous personality article that everyone in my office has a stack of four oversize Lego-style blocks sitting on our desks, in various combinations of red, yellow, green, and blue. The stacks reflect our Discovery Insights profiles, broadcasting to our colleagues how best to communicate with us, similar to Skolnik’s one sheet. (For me? Start with the details, then show me you care, then involve me.) This works for us because we’ve all attended the training, and we’re all well-versed in the language of color energies.

But what do you do when you find yourself on a temporary team of people who aren’t all familiar with the same personality typing language? How will a Myers-Briggs “ISTJ” and an Insights Discovery “Inspiring Helper” ever understand one another? Well, you have very little influence over anyone else, but you can control yourself, to a point. Here are four quick things you can do to thrive in the Hollywoodization of our working world.

There’s never a license to be needlessly difficult at work, but when we work with longstanding teams who know and understand us, we’re often granted more leeway. We can have a bad day or a bad week, and our colleagues will know that’s not the norm for us. But as work becomes more contract-based and less long-term and permanent, we won’t have as many second chances. There’s no putting people on performance plans, no giving them time to improve. There’s only, “Nope, not inviting that person to be a part of the next project.” Which brings us to…

Self-awareness and self-understanding are literally the only true gateway to self-improvement. And this is the stated goal of many personality tools. (From Discovery Insights homepage: “Increasing self-understanding leads to business breakthroughs.”) Any insights you gain about why you do what you do will help you in your interactions with others—even in temporary work relationships that are organized around a single, short-term project.

Here’s an example: a friend of mine learned through a personality test that he tends to introvert his sensing and extrovert his thinking. In other words, all of his fact finding and data gathering happen inside his head, and then he blurts out a judgment or decision, which often catches others off guard. He had never understood why people reacted to his ideas that way. Now he works hard at verbalizing the data points that inform his decisions, and he finds it’s much easier to get people on board.

3. Stretch Beyond Your Type

Grant’s podcast began with a story of an attorney who, after a merger, was asked to take a personality test and then wear a t-shirt broadcasting her type to an executive retreat. One senior exec joked to anyone whose type didn’t match his, “Don’t worry, you won’t be fired, but you’ll slowly be weeded out.” Only it wasn’t a joke. People actually got fired, which is an egregious misuse of the purpose of personality tests. But, Grant pointed out, we often fire ourselves from jobs because we have the wrong personality.

“What I mean is, we opt out of entire career paths,” Grant said. “We decide not to pursue jobs that feel like a stretch for our personalities. We close the door on opportunities and on ourselves.” That’s also a misuse of the tools. I believe all types can make contributions in all roles and all career fields, and we should never let ourselves be pigeonholed, whether we’re working on a permanent team or a temporary objective.

Not all ad hoc work teams are comprised of different companies, contractors, and freelancers. Sometimes a short-term project will pop up within a company of permanent employees, and you’ll find yourself working alongside people from other departments. You’ll have some languages and systems in common, but not all. It helps to start with as much common ground as you can, which is where a company-wide work management platform (or operational system of record) comes in. When you start with work processes that are streamlined and supported by technology that’s familiar to all involved, you can focus more energy on working well with the other personalities on the team. Ramp-up time is diminished, and projects can hit the ground running with ease.

When I completed the Discovery Insights training session with my team, I did walk away with a user manual outlining my key strengths and weaknesses, personal style, possible blind spots, suggestions for development, and more. Most of it is just for me, but I can see the value in Skolnik’s exercise of condensing it into a one-sheet for people who might be working with me on a one-off project—a situation that is cropping up more and more. Would I be bold enough to allow others to write my user manual for me, as Skolnik did? I’m not sure. But I loved how he responded when Adam Grant asked what he does when colleagues include traits he doesn’t like in his user manual:

“The truth is something I do that might be annoying to one team member is actually the best part about working with me to another team member. So I think, again, it’s all about just saying, let’s have a conversation about it to figure out how we can be most productive.” Agreed.