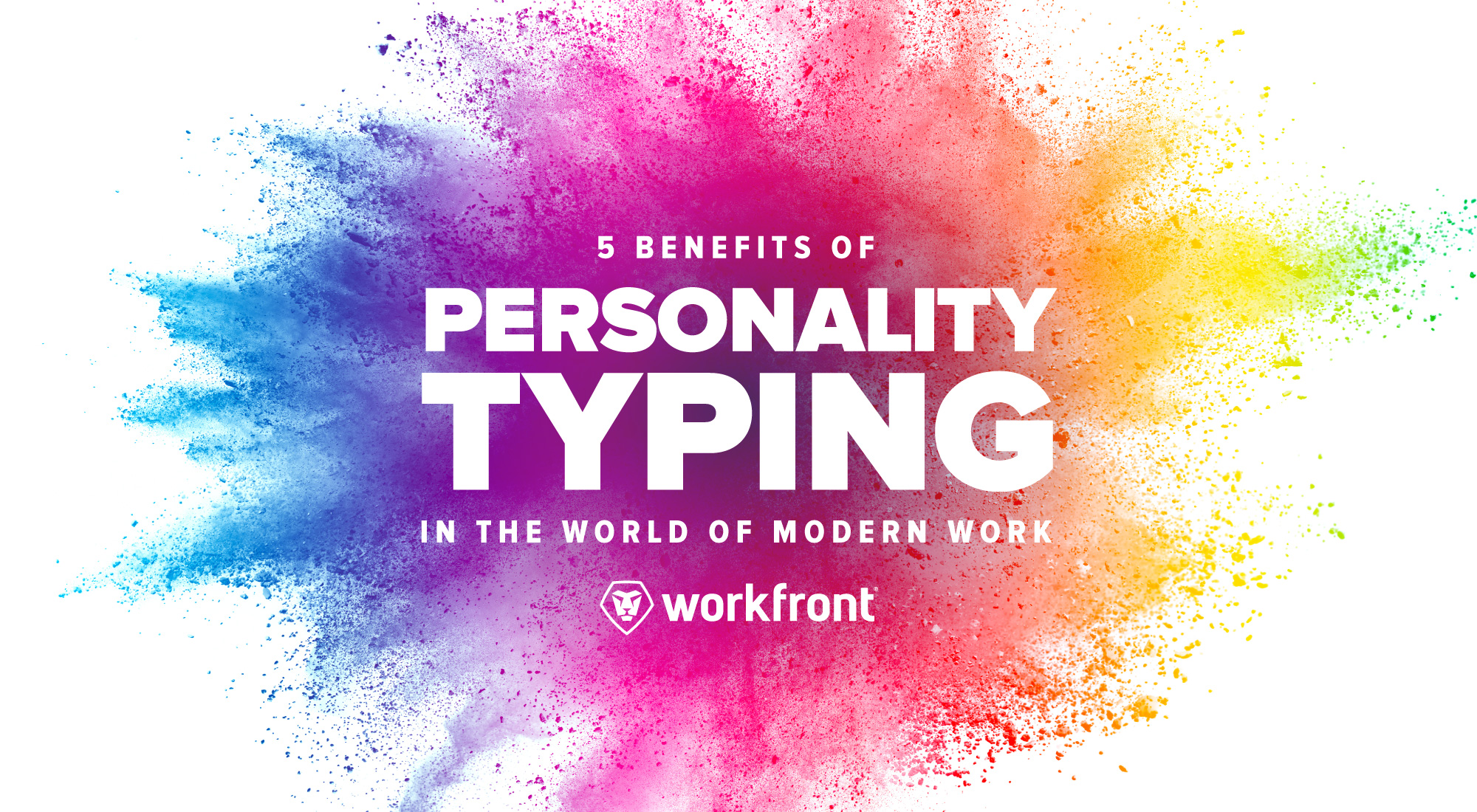 5 Benefits of Personality Typing in the World of Modern Work

By Heather Hurst, Senior Director of Corporate Marketing at Workfront

Hi, I’m Heather, and I’m a Coordinating Observer. My color stack is blue, green, red, yellow. I might be an ISTJ, and I sometimes exhibit some Type A tendencies. The sorting hat places me squarely in the house of Ravenclaw.

Have you been initiated into the cult of personality tests at a current or past job? Maybe the Hexaco Personality Inventory, DiSC profile, Insights Discovery, Myers-Briggs Type Indicator (MBTI), or another psychometric tool?

But the popularity and proliferation of these tests, not to mention their staying power, certainly says something. The Type A/Type B dichotomy has been a staple of office culture as long as I can remember. I have a friend who credits the MBTI for saving her marriage. And as I look around my open-floor plan office right now, I see an Insights color stack sitting on nearly every desktop, broadcasting each person’s work preferences. In the interest of full disclosure, here’s mine:

BLUE: Give me details.

GREEN: Show me you care.

RED: Be brief, be bright, be gone.

Given that I’m “intensely curious and always seeking to find coherence in endless amounts of data,” according to my Insights results, I decided to turn the tables on the personality tests, and analyze them for a change. Are they still relevant in the age of digital transformation, where remote work is on the rise, and teams are more geographically dispersed than ever before? Is personality typing useful for ad-hoc teams that assemble around a particular project and then disband once the work is done (aka the “Hollywood Model of Work”)? For me, the answers to these questions are “yes” and “yes,” and here are the top 5 reasons why.

At one training I attended, a young, confident manager named Matt was stopped in his tracks by a single sentence he read about his personality profile: “assumes what is obvious to him is obvious to everyone.” I watched understanding dawn on his face. He tended to value quick thinking and decisiveness and was somewhat dismissive of those who arrived at conclusions more slowly or were more measured in their decision-making. That his way wasn’t an obviously better way of navigating the world had never occurred to him. He even stated as much to the group.

But he seemed to respond to the philosophy undergirding the MBTI test, which asserts that there are no better or worse combinations of types in relationships or at work. Each type and each individual offer different gifts. In fact, this approach prefers the term “gifts” over “tendencies,” because the latter implies we are at the mercy of our personality traits.

The truth is that we are all capable of behaving along the full spectrum of human behavior, no matter where we fall on MBTI’s Introvert-Extrovert or Judging-Perceiving scales. But when an Introvert must draw upon their powers of Extraversion, for example, or a Sensing person must consult their iNtuitive abilities, the cost is energy. Just like it takes more effort for a left-handed person to brush their teeth with their right hand. But one is not inherently better than the other.

After that training session, I saw in Matt a new sense of respect for other people, especially toward a colleague who had a strong “perceiving” gift, which meant she often took her time to weigh all the options before committing to a course of action. It was a bit of a revelation to both of them, to be honest, that his approach was not better or worse than hers; they were just different. And hers often led to more thorough and thoughtful results.

The caveat: We should not expect any personality test to explain every difference between us. Personality is far too complex to be adequately described by any test, no matter how sophisticated. (One exception may be The Psycopath Test; I understand that one is frighteningly accurate.)

2. They help us understand ourselves.

One of the biggest benefits of the personality tests I’ve seen in office settings is the insights they provide into our own tendencies and behaviors. When employed properly, they give us permission to be our authentic selves, embrace our strengths, and recognize our weaknesses, contributing in a big way to our personal development.

In an article titled “Does Personality Matter at Work?” Lindsay Kolowich concluded, “Many [of these tests] like the DiSC, are designed to help you gain more honest insight into … how you approach deadlines and collaborate, for example. Having that information can help you better prepare for team projects and high-pressure scenarios, and self-identity detrimental behaviors of which you might not have been previously aware.”

And when we truly believe that our colleagues are equally committed to understanding their own strengths and weaknesses, it can build a sense of trust and camaraderie within the team.

The caveat: Personality tests should never be used as an excuse or a reason to limit our professional aspirations. Each tool divides personalities into varying types and subtypes—from 2 to 72, depending on the paradigm. But no type, no matter the test, should pigeonhole us. Type doesn’t account for our interests, talents, or skills. My belief is that all types have the potential to make valuable contributions in any role or career field.

3.  They give us a shortcut to understanding each other.

“A past employer of mine used MBTI training widely in the office,” says freelance content marketer and writer Angie Lucas. “They held regular training sessions, so everyone knew everyone else’s type and what it all meant in terms of communication, decision-making, that sort of thing.”

One of Angie’s colleagues, Melody, had a propensity to meet new ideas—or anything that threatened the status quo—with instant resistance, skepticism, and sometimes even open hostility. Angie was a relatively young manager at the time, and she was at a loss how to keep the negativity from derailing good ideas as well as the bad ones.

In a subsequent MBTI training session, the consultant reminded Angie: “Remember that’s just where Melody starts. It’s not where she ends up.” It was all couched in MBTI terminology that helped this make perfect sense, in light of Melody’s particular personality type.

A light bulb went on for Angie. It was true. Melody inevitably got on board with new initiatives; she just needed to work through her resistance verbally first. Angie realized what she needed to do about this problem was…nothing. She simply had to be patient while Melody poked holes in an idea, because she always filled the holes back in herself.

The caveat: A behavior pattern that isn’t helping further team goals doesn’t have to be embraced, just because it’s someone’s first instinct based on their “type.” This same consultant introduced Angie’s team to a Problem Solving Model that united everyone around the same process. From then on, Melody’s objections were more likely to pop up during the evaluation stage, where her gift for critical thinking was an asset, instead of during a pie-in-the-sky brainstorm session, where she could inadvertently shut down other people’s creativity.

4. They give us a common vocabulary and foundation.

I’ve mentioned a few different personality tests so far, and I’ve just barely scratched the surface. There are dozens, maybe hundreds. Many are grounded in Carl Jung’s personality theory from the 1920s. Some seem to be based solely on someone’s personal observations, like the types in Gretchen Rubin’s book Better Than Before. Others are just for fun, like the four houses of Hogwarts. (Although, to be honest, I wouldn’t mind a heads up if my office were dominated by Slytherins.)

Whatever system you choose, I believe the act of getting everyone in a room and giving them a vocabulary for acknowledging their differences and understanding their strengths and weaknesses sends an important message. It broadcasts a sense of openness, a desire to bridge the gaps between us, a willingness to look at one another with curiosity and acceptance. It gives people the opportunity to address and resolve conflicts in a productive way.

This assessment of Deloitte’s Business Chemistry system could be said of any of the other approaches I’ve discussed:

“The four styles give leaders and their teams a common language for discussing similarities and differences in how people experience things and prefer to work. Groups come to appreciate why certain times feel so challenging (that is, which perspectives and approaches are at odds), and they also begin to recognize the potential power in their differences.”

The caveat: In my opinion, a personality profile should never figure heavily into hiring or firing decisions, in an attempt to orchestrate team dynamics. According to shrm.org, about 22 percent of organizations use personality testing to evaluate job candidates. This is what gives personality tests a bad rap. They can’t predict who will perform well in a given role; personality and intrinsic human motivators are far too nuanced for that.

5. They break down communication barriers.

To risk stating the obvious, “communication can only be effective if it is received and understood by the recipient.” That sentence came from my Insights Discovery personal profile, a 22-page exploration of my own unique gifts and quirks. The list of “strategies for communicating with Heather” seem to me like your basic, one-size-fits-all communication tips:

·    Be thorough, organized and on time

·    Back up your assertions with reasons and data

Who doesn’t appreciate all those things? Apparently, not everyone, as I realized when I viewed my colleagues’ lists. And the lists of DO NOTS was even more revealing. At the top of my list was, “Do not get too close or touch her,” which made me wonder, do other people like close talkers who violate their personal space—while they’re at work? I guess so. But don’t count on me to be that person.

As G.I. Joe famously said throughout my childhood, “Knowing is half the battle.” It truly is, but it’s only half. Any attempt we can make to communicate with others in the way they are best able to hear us is worth it. But we first have to know what that looks like.

The caveat: In the digital age, you still need to rely on modern work management technology to streamline and archive your most important communications, especially for remote teams that rely on asynchronous collaboration. An Operational System of Record that provides a centralized, unified communication platform can help correct for our inherent personality differences. Personal space can’t be invaded, thoughts can’t be interrupted, voices can’t be too loud. Sure, other misunderstandings can arise, especially since tone of voice isn’t always apparent in written text, but that’s what emojis are for. ;)

The More You Know…

It can take years of working together with a team to get used to everyone’s quirks and idiosyncrasies and figure out how to work well together. But in our modern world of knowledge work, where ad hoc teams assemble around smaller projects and teams are more remote than ever before, we don’t always have this luxury. A personality profiling test can be a useful shortcut for self-discovery, appreciation of individual differences, team cohesion, and more effective communication, as long as it’s used to understand and expand rather than to pigeonhole and limit potential. Which is exactly the sort of statement you’d expect to hear from a Ravenclaw.