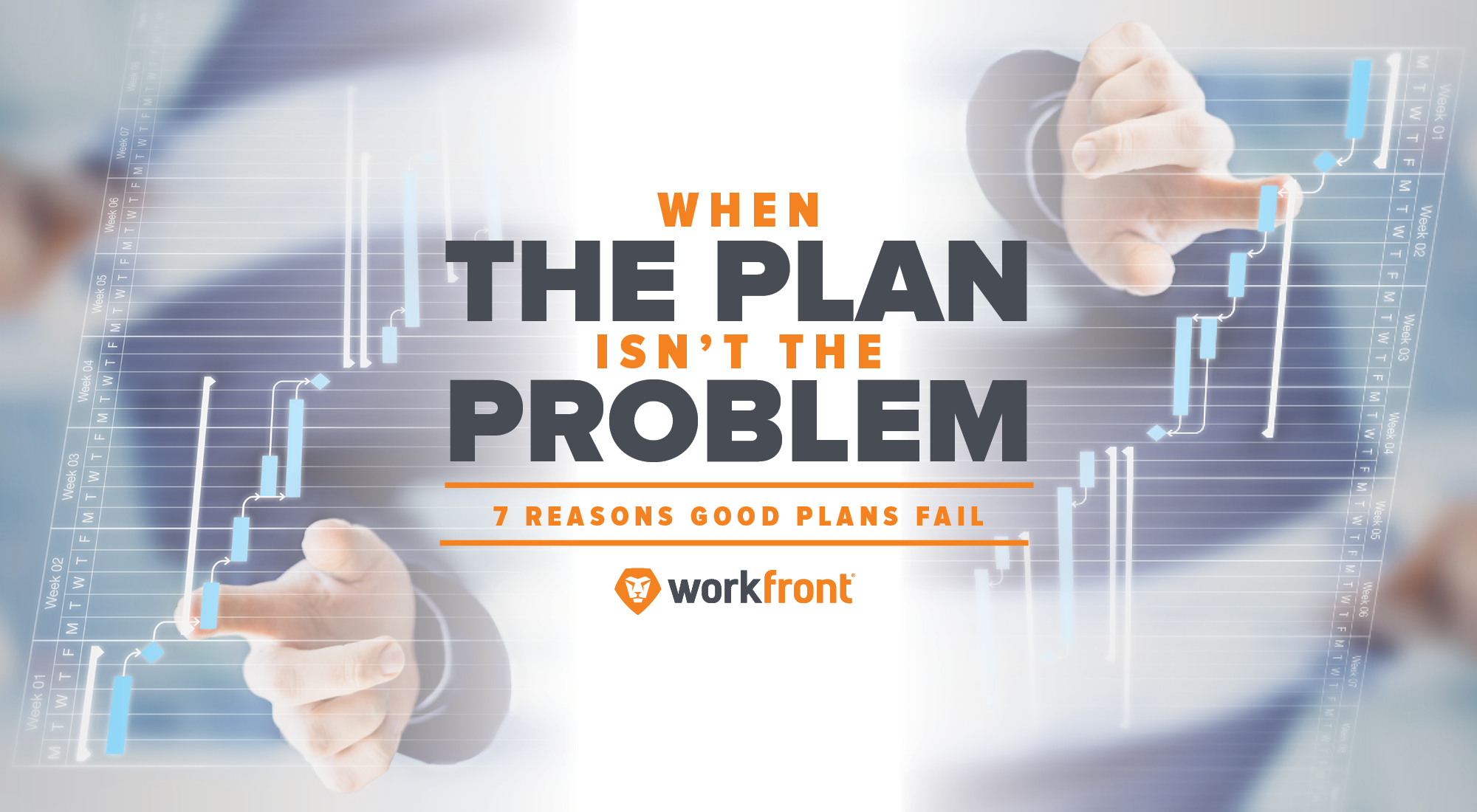 When the Plan Isn’t the Problem: 7 Reasons Project Plans Fail

Even if you write a project plan, projects still go awry more often than not. You may have heard the statistics. They aren’t pretty:

When a project starts going off the rails, your first impulse might be to doubt your original plan: “If only we had accounted for….” “Next time we need to…” “It’s too bad we didn’t…” It’s a common reaction. But pinning all your woes on poor planning will never help you fix a project while you’re in the middle of it. Instead, it shifts your solutioning to the next project, rather than helping you save the initiative you’re working on now.

The way to flip the statistics—and ensure you’re succeeding far more often than you fail—is to recognize all the other sneaky pitfalls that may be derailing your projects, particularly in the execution phase, when your pie-in-the-sky plans meet harsh reality. If you can identify and address any of the following problems while the project is still underway, you have a shot at turning the wheel before the car flies off the cliff.

1. Leaving the Plan in the Drawer

If you spent months crafting a great plan and then failed to take the next steps—perhaps because you ran out of steam, other priorities or crises caught your attention, or you failed to take into account competing projects—all that planning time does not have to be wasted.

Dust off the plan, make some adjustments based on new realities, and start driving on the portions of the plan that will have the greatest business impact. Even if you failed to glance at your annual plan between February and August, it’s still worthwhile to make that final push before the end of the year—and recommit to doing better next time around. Perhaps by avoiding or addressing the six additional pitfalls that follow.

Freelance marketer Angie Lucas once worked for a company that gathered twice a year for multi-day meetings led by a brilliant organizational consultant. The planning sessions were organized around sound principles, and they always resulted in detailed goals and action items for each individual involved, which were aligned to the company’s mission and vision. Participants usually left feeling energized and creative—for a few days at least.

“We always thought we were walking away with an actionable plan that had 100% buy-in from everyone in the room,” Lucas says. “But then reality would set in. The organizational problems were so severe and ingrained that no plan, no matter how brilliant, could really take root.”

It came down to a leadership problem. Too much of the work was concentrated among too few individuals at the top of the company—who were so busy working in the business that they rarely made time to work on the business. The executive team was great at crafting inspiring, visionary plans but less effective at addressing the organizational issues that prevented those plans from gaining traction.

3. Lack of Flexibility and Agility

Thanks to rampant digital transformation, it’s difficult to accurately foresee 2 months into the future, let alone an entire year.

“Even a yearly plan that’s impeccably designed will encounter unexpected obstacles in twelve months,” says Agile expert Andrea Fryrear. Do you have processes in place to pivot around those obstacles? To adapt your plan to respond to market conditions, customer feedback and other input?

Writing in Forbes, corporate strategist Falguni Desai recommends breaking large plans (especially multi-year strategic plans) into 90-day action plans, “which map out what needs to be executed along with investment and resource requirements. The benefit of such 90-day plans is a greater sense of urgency and an immediate translation from plan to execution.”

Every plan is based on variables that are outside of human control. We may make a plan assuming that certain things about our business and market that are true today will continue to be true tomorrow. Or that the pace of change we see now will continue, or speed up. Or that our industry isn’t going to see an Uber-style disruption in the next 12 months.

Consultant Joe Evans recommends looking at assumptions directly and calling them what they really are: hypotheses, conjectures, theories, guesses, risks.

“Dealing with identified assumptions essentially becomes a task of translating the assumption to a risk,” Evans writes. “Taking the time and caution to identify, assess and manage risks and other factors will always be a worthy investment, even when time is of the essence. The vetting of these factors will pay off in smooth implementation of the strategic plan down the line.”

Did your high level plans include the mapping of specific roles and responsibilities to individuals who actually had bandwidth for those tasks? Did you take the time during the planning stages and throughout the project to ensure you had adequate resources to execute the plan? Do you have a way to reallocate resources as plans inevitably shift and change throughout the lifespan of the project?

Thorough resource planning is often skipped (or skimped upon) because it’s not an easy thing to assess, unless you have access to a resource management software, available in a Operational System of Record. A tool like this can clearly outline your available resources, projects, and net remaining resources, often providing easy drag-and-drop functionality that removes much of the manual work typically involved in assigning and reassigning work.

But too many companies are flying blind when it comes to resource allocation. Harvard Business Review reports that “only 20% of managers say their organizations do a good job of shifting people across units to support strategic priorities. The rest report that their companies rarely shift people across units (47%) or else make shifts in ways that disrupt other units (33%).”

Project and portfolio manager Barry Hodge once took over a troubled project that had been through three other project managers in 3 years. “After looking at it, I decided to take on the project,” Hodge says. “I could see the reason the project was struggling was due to poor visibility.”

The first thing he did was to transform the project into a programme of work comprised of 15 smaller projects. He continues:

“I then broke the projects down into tasks and allocated resources to the tasks on a daily level. This meant project stakeholders could see from the top programme level all the way down through the projects to task level. This visibility enabled them to see what was being done and by when.”

Trust grew, tension eased, the scope of work got much more realistic, and the project succeeded in the end. All because of improved top-to-bottom visibility while work was in progress.

7. Stubbornly Sticking to the Plan

A plan can fail because you stuck too closely to the plan? Actually, yes. According to an article in Harvard Business Review, one of the big myths about strategy execution is that “execution” can only mean “sticking to the plan.”

“After investing enormous amounts of time and energy formulating a plan and its associated budget, executives view deviations as a lack of discipline that undercuts execution,” the authors write. “Unfortunately, no Gantt chart survives contact with reality. No plan can anticipate every event that might help or hinder a company trying to achieve its strategic objectives.”

So what’s a company to do? Embracing flexibility and agility is important (see #3 above), but it’s also important for managers and employees at every level to redefine what “strategy execution” means. The authors offer this alternative:

“Strategy execution, as we define the term, consists of seizing opportunities that support the strategy while coordinating with other parts of the organization on an ongoing basis. When managers come up with creative solutions to unforeseen problems or run with unexpected opportunities, they are not undermining systematic implementation; they are demonstrating execution at its best.”

Sometimes the Plan Isn’t the Problem

Could we all do better at planning—at aligning our initiatives with the company’s vision, following a data-driven approach, and being realistic in our scope and approach? Almost certainly.

But focusing on planning problems at the expense of execution problems will only trap us in a continual loop of blaming the past in hopes of fixing the future.

Sometimes the plan isn’t the problem. Sometimes endemic organizational issues, bad assumptions, and even white-knuckling that plan against all odds are the true culprits. And if we can identify these kinds of obstacles in the moment, and learn to effectively steer around them, we can not only keep today’s project from becoming another project failure statistic, but also the next one. And the one after that.