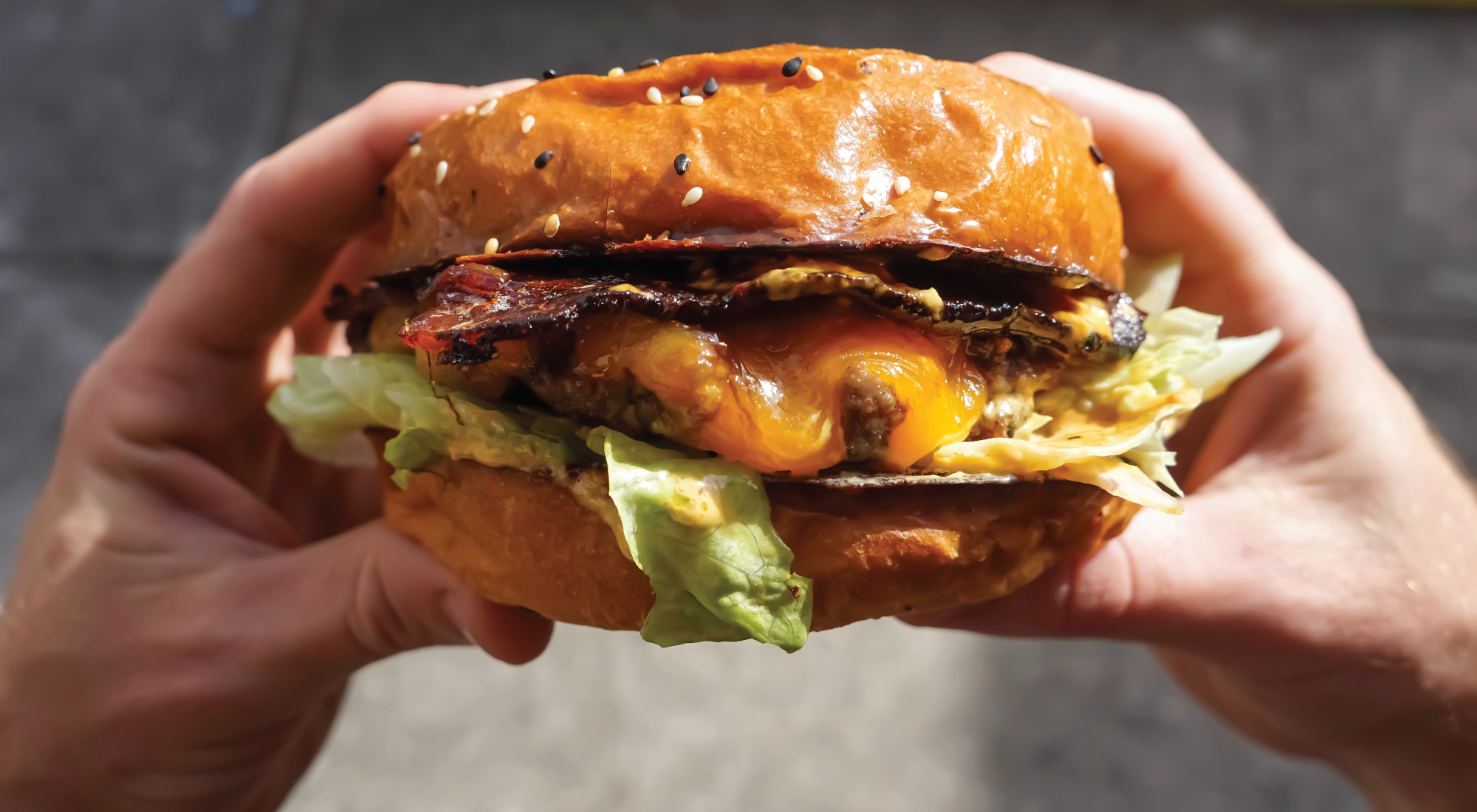 Here it is, the end of January, and the vast majority of us couldn’t perfectly stick to our New Year’s Resolutions. Including, ahem, yours truly. If you’re feeling like a complete failure over it, don’t. According to U.S. News and World Report, 80 percent of all resolutions fall apart by February. So you and I are definitely not alone.

Now, I’m not here to hound anyone about getting to the gym, fitting more kale and kombucha into your diet, or sticking to a budget. I suspect we all feel plenty of pressure on those fronts as it is.

Instead, let’s talk about our work resolutions and goals — and uncover the reasons why they are just as likely as personal goals to fall apart before they’ve even gotten off the ground. Why? Because if we can arm ourselves with the right insights and tools, we just might be able to stick to a goal for two whole months — or maybe even longer.

1. Your resolutions were pipe dreams.

Let’s be honest. You and your team members didn't grow new personalities and work dynamics overnight, just because the calendar flipped from December 31st to January 1st. You’re all the same people, with all the same pressures and problems you had before. And if your goals and resolutions weren't tethered to the reality of your situation, you’ll have no hope of achieving them.

In his book Done Right, Alex Shootman talks about that fine line between extraordinary goals and pipe dreams, which are “so far away from reality that no one believes they’re possible.” He applies a five-minute stress test to find out if an objective is crossing into pipe dream territory, which he adapted from an exercise in the best-seller How Did That Happen? by Roger Connors and Tom Smith. They suggest asking your team to score (on a scale of one to ten) their level of agreement with your team goals. A low score points to a low level of overall confidence, which means you either need to revise those resolutions or have some follow-up discussions to get your team members more fully on board.

According to Workfront’s 2019 State of Work report, 58% of knowledge workers today say they’re so swamped with day-to-day work that they don’t have time to think. If your team members are at a constant sprint just to keep up with the work that’s already on their plates, there’s no room for exciting, new initiatives. 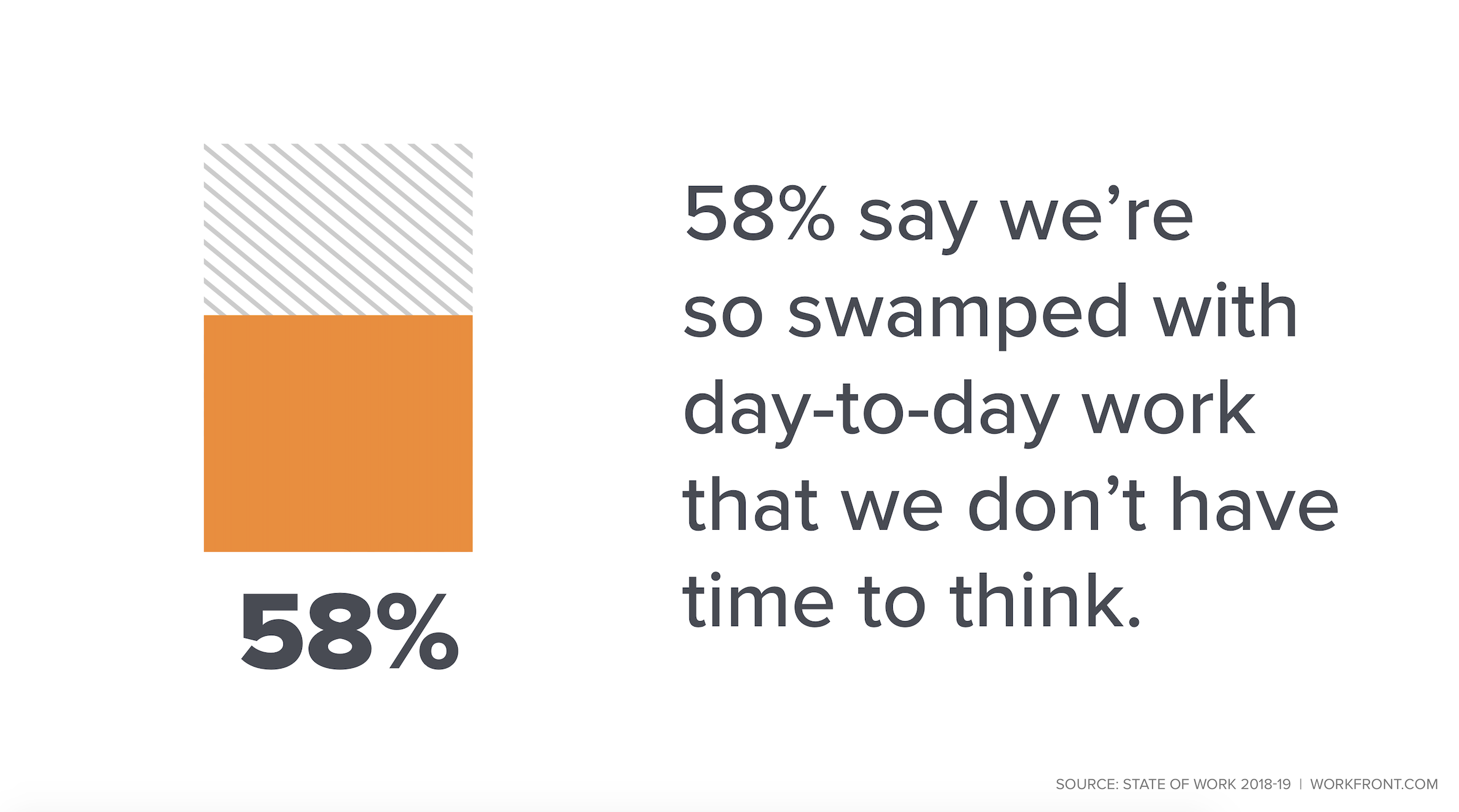 Luckily, this statistic isn’t as bleak as it first appears. When we dug into the numbers, we discovered that despite their overwhelming busyness, U.S. workers are only spending 40% of their workday on their primary tasks. The two biggest distractions? Email and pointless meetings. And both of those are within our power to rein in. (Here are some handy meeting tips and email strategies to get you started.)

3. You don’t think very highly of your co-workers.

If you saw that an Uber driver had a rating of 3.7/5 stars, would you happily hop in the back seat of their car? Most likely not. And yet that’s the rating the average knowledge worker today gives to their co-workers, according to State of Work. Likewise, would you happily hop in the passenger seat of someone else’s work goal or project, if you don’t have full trust in their ability to steer you to a successful outcome? Again, most likely not.

In order to have a cohesive team that can work together to achieve shared objectives, trust levels need to be high—hopefully higher than what would amount to a B on a report card. And one way to increase trust is to increase transparency.

State of Work also revealed that, on average, respondents rank themselves as the most productive employees around, with their direct reports coming in second, followed by their co-workers and managers (tied), and company leadership bringing up the rear—by a large margin.

What pattern can you see in these rankings? Here’s what I see: We tend to perceive other people’s productivity based on how familiar we are with their day-to-day duties, responsibilities, and outputs. We’re well acquainted with our direct reports’ work, so it’s easier to believe that they’re contributing to the greater good, and we rate them highly. But since we have no idea what the executive team does all day, they must not be productive, and we rate them poorly. There’s another stat from our report that backs this up. Nearly two-thirds of knowledge workers agree with the statement: “I am clear on my own work and priorities, but other people’s work is a mystery.”

This is one area where modern work management technology can effect lasting change. Used properly, it creates greater openness and equality, so everyone is more directly connected to everyone else—whether they’re positioned above, below, or sideways on the org chart—and more able to see individual and team contributions in real time, thus increasing transparency and organizational unity.

On average, U.S. workers say 61% of the work they do matters to them personally, with Baby Boomers being more likely than Millennials to agree with this statement. This is a big one. If almost 40% of your team doesn’t believe that the work matters, they’re not going to be nearly as effective as they could be in helping you achieve team goals.

As Alex said recently at a panel lecture, “I think there is an art in bringing your team together and getting them to create the goals. And, by creating goals, folks own them and take way more pride in accomplishing those goals.” I couldn’t agree more. You need your team to get their hearts engaged in the goal, not just their minds, which you can do by creating a conducive environment, listening deeply, and turning over the microphone.

6. You’re not taking advantage of automation.

Currently, office workers say that 37% of the day-to-day aspects of their job are automated, leaving a sizeable opportunity for artificial intelligence to make further inroads. And how do today’s office workers feel about that? Terrified? In fear of a robot revolution that will render their jobs obsolete?

On the contrary, 69% believe automation will give them more time to focus on their primary job duties, and 83% say rising automation will let us think of work in new and innovative ways. So the willingness is there, and the potential upside is huge: more time to focus, more creative energy, and more collective brainpower devoted to setting and achieving extraordinary resolutions, with more of the busy work being done by bots. What’s not to love?

If you can imagine a world where you set realistic resolutions as a team, you’ve freed up more time for everyone by reducing email and meeting overhead and increasing automation, you’ve employed modern work management tools to increase interpersonal transparency and trust, and you’ve learned to engage your team’s hearts as well as their minds, then I’ll show you a world where New Year’s resolutions last far beyond the end of January. But don’t just imagine it, give these remedies a try right here and now. It’s not too late. Not only will you be able to rescue this year’s resolutions from certain death, you’ll be ready to dream up (and achieve) some truly extraordinary goals come 2020.