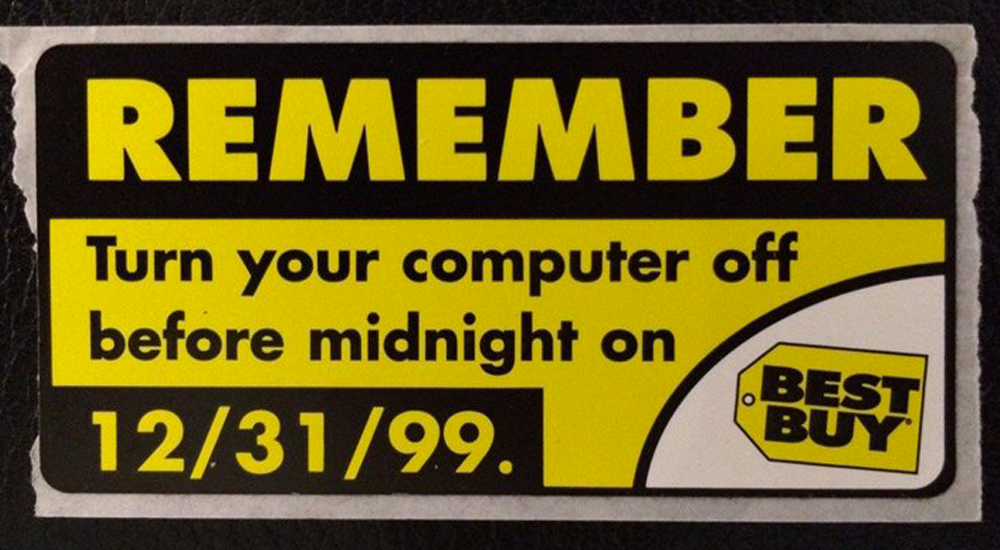 Reimagining "Office Space": What if Initech Had Work Management Software?

Office Space, that cult-classic comedy that shined a spotlight on cubicle-farm drudgery, turns 19 this year. Whether or not the film stands the test of time could depend on how old you were at the time of the film’s release, but for me and many of my fellow Gen Xers, it rings painfully true. Or at least it did.

As I recently re-watched the movie from today’s perspective, I found it as funny as ever (“I don’t really like talking about my flair”). But I was relieved to realize how much has changed about the way we work. With that in mind, here are eight plot points that wouldn’t make sense if Office Space were made in today, in the age of digital transformation.

Let’s start with the most obvious one. The main character, Peter Gibbons, and his colleagues, Samir Nagheenanajar (“How come no one in this country can pronounce my name right?”) and Michael Bolton (“Why should I change my name? He’s the one who sucks”), were tasked with manually updating thousands of lines of computer code due to the “the Millennium bug.”

“I sit in a cubicle and I update bank software for the 2000 switch,” Peter helpfully explains. “You see, they wrote all this bank software and to save space, they put 98 instead of 1998. So I go through these thousands of lines of code, and uh, it doesn't really matter. I, uh, I don't like my job. I don't  think I'm gonna go anymore.” 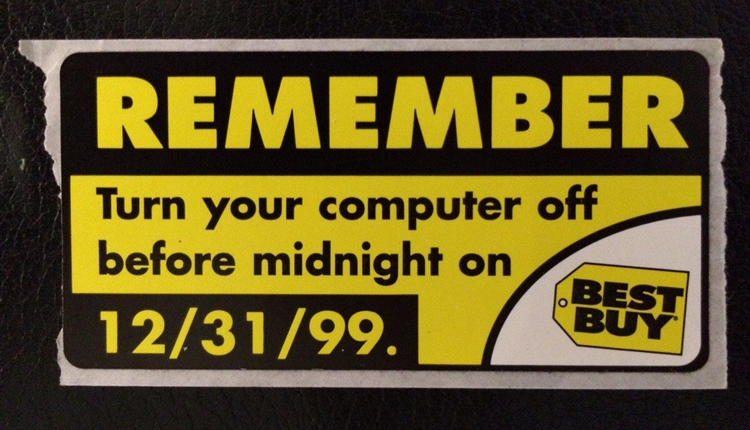 Today, such a task would be an obvious candidate for automation. Mindless, repetitive tasks in general are becoming more and more a thing of the past as the digital revolution frees knowledge workers up for more engaging and creative work. 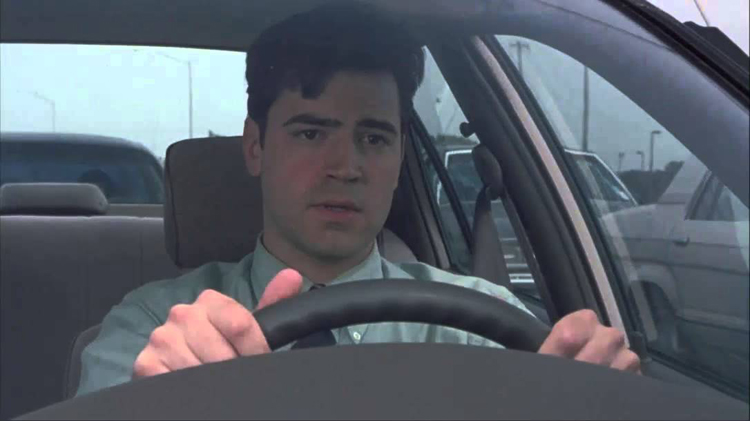 Peter’s day starts with a horrific commute to the office, where a senior citizen using a walker outpaces him on the sidewalk. With 35% of the U.S. workforce now working remotely, there’s a good chance that today Peter would be performing at least some of his work from the comfort of his own home—where he could enjoy even more of his neighbor Lawrence’s classy commentary coming through the apartment wall.

“Hello, Peter, what’s happening?” drawls middle manager Bill Lumbergh as he stops by Peter’s cubicle, Initech coffee cup in hand, to ask whether Peter had seen the memo about the importance of cover sheets for the TPS reports. 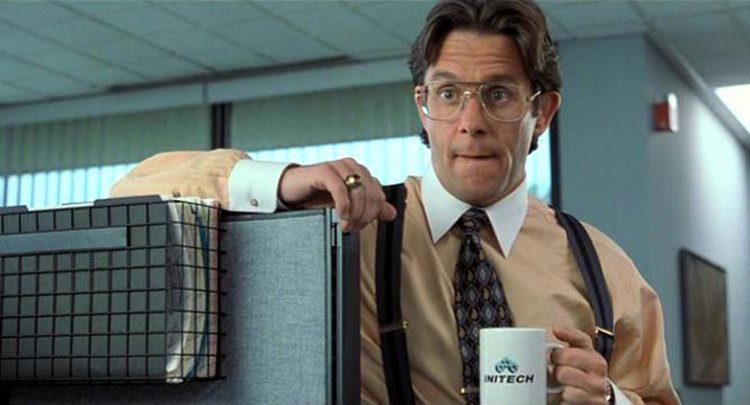 Today, Lumbergh would already know what’s happening, because he’d be running an Agile development team with daily stand-up meetings. There would either be a physical burn-down chart on a whiteboard in the office, showing the status of all projects, or its digital equivalent. Lumbergh wouldn’t need to do his signature desk drive-by, which would be unfortunate, because I for one can’t get enough of the suspenders. Mmm-kay?

Peter hears about the TPS report cover sheets at least three times in the first five minutes of his workday. He even gets confronted about it at lunch with Samir and Michael, “And speaking of problems, what's this I hear about you having problems with your TPS reports?” 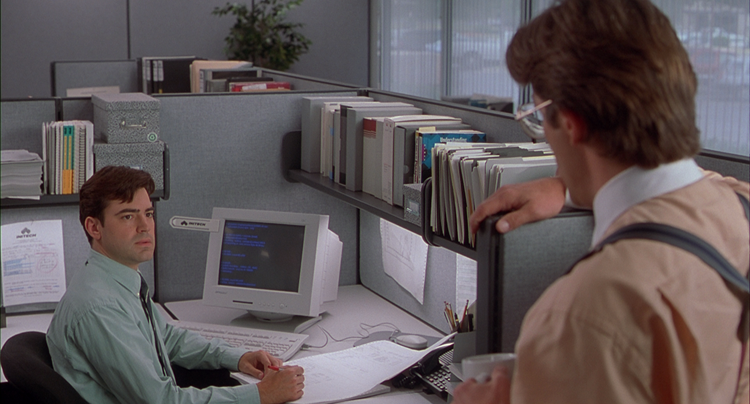 Not only are cover sheets a thing of the past, but companies that have work management software in place don’t have to rely on verbal, one-to-one communication for policy and procedure changes anymore. A decision or policy shift can be shared just once in a collective online space, where everyone can see that it’s been shared, and they also can see who else has been included in the communication.

The Peters of today never have to hear Bill Lumbergh and/or Dom Portwood ever again say, “If you could go ahead and try to remember that from now on, that would be great.” Why waste precious mental energy remembering procedural details when we have an operational system of record to remember them for us?

5. Coming in on Saturday

“Hello Peter. What's happening?” Lumbergh says to Peter, catching him just before he sneaks out of the office on Friday afternoon. “Um, I'm gonna need you go ahead and come in tomorrow. So if you could be here around nine, that would be great. Oh, oh, yeah…I forgot. I'm gonna also need you to come in Sunday too.” 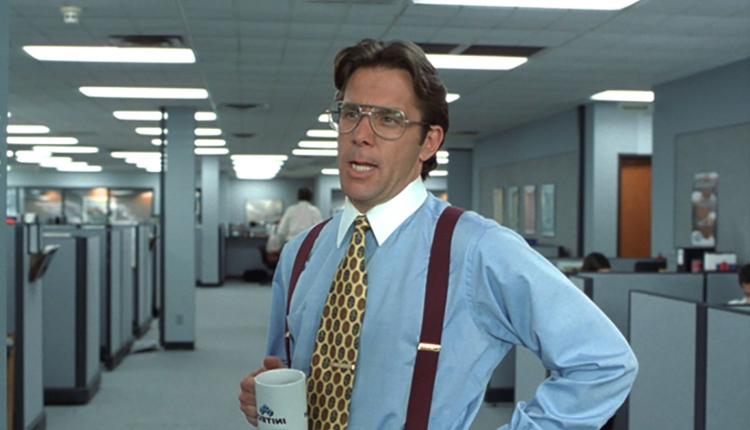 With our smartphones doubling as mobile offices and work management apps that connect us to our work no matter where we are, rarely does any knowledge worker have to physically enter the office on a Saturday or Sunday anymore. Of course, whether or not we're still working too much on weekends—maybe even more than we did before—is a different matter entirely.

Two consultants, both named Bob, are hired to interview employees about the tasks they complete in a typical day, with the not-so-subtle goal of streamlining the operation and downsizing departments as needed. 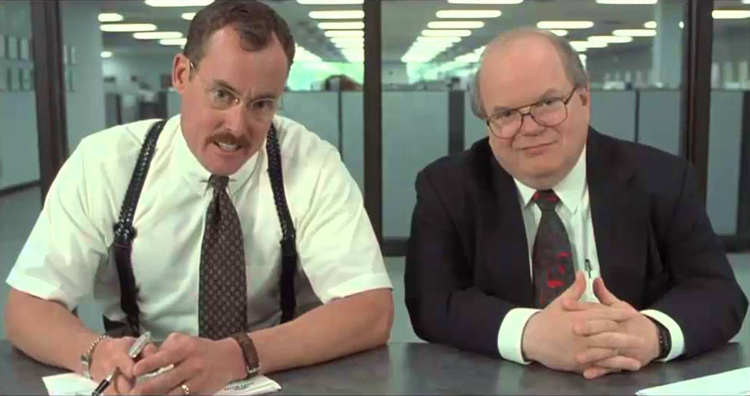 When they interview Peter, he mentions arriving late and sneaking in by the side door (he’s been hypnotized into an extremely mellow state, but that’s another plot point for another story), then says:

“I just sort of space out for about an hour. I just stare at my desk, but it looks like I’m working.” A bit later, he confesses, “I’d say in a given week, I probably only do about 15 minutes of real, actual work.”

With the transparency offered by work-management software, it doesn’t matter if Peter arrives late, as long as he gets his work done. And it’s no longer possible to get away with merely “looking like” you’re working.

Teams that have a single source of truth on their side—described by Forrester as a “central nervous system” or “strategic execution system of record”—will know whether you’re working, and what you’re working on, and how much bandwidth you have available at any given time. Work teams today don’t need to hire a couple of Bobs to ferret out the weak points in their process. With work management software on their side, they’ll be able to see it themselves.

“What would you say…ya DO here?” the Bobs ask a terrified Tom Smykowski. He replies that he takes the specs from the customers and routes them to the software engineers, who lack the “people skills” to interface with the customers directly. 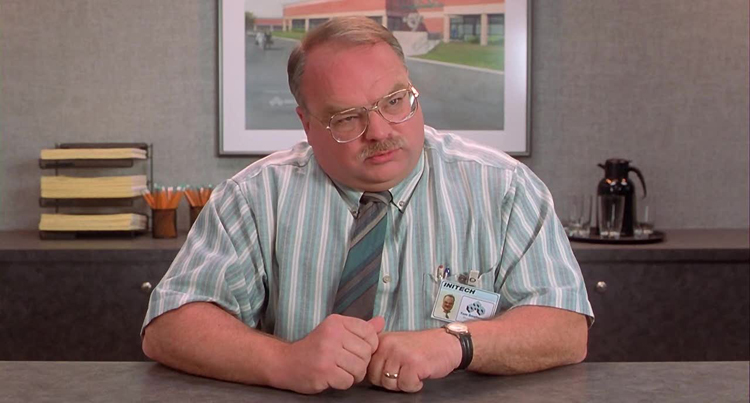 “So you physically take the specs from the customer?” one Bob asks. Tom replies that no, his secretary does. And then the other Bob asks, “So you must then physically bring them to the software people?”

Tom’s stammered reply quickly turns into a rant. “Well, look, I already told you. I deal with the customers so the engineers don't have to! I have people skills! I am good at dealing with people! Can't you understand that?!? What the hell is wrong with you people!!!”

Tom was right to feel threatened. His middle-man job would most certainly be obsolete today. An operational system of record makes it possible for engineers, customers, project managers, and even consultants to collaborate directly with one another in a shared space, within the context of the work that’s being done.

The premise of this article—that if Office Space were made today, many of its plot points wouldn’t make sense—presupposes that Office Space would only be made today if it hadn’t been made in 1999. And if it hadn’t been made in 1999, then we wouldn’t have the iconic red Swingline stapler we all know and love. (Well, the relatively few of us who might still have staplers at our desks, anyway.) 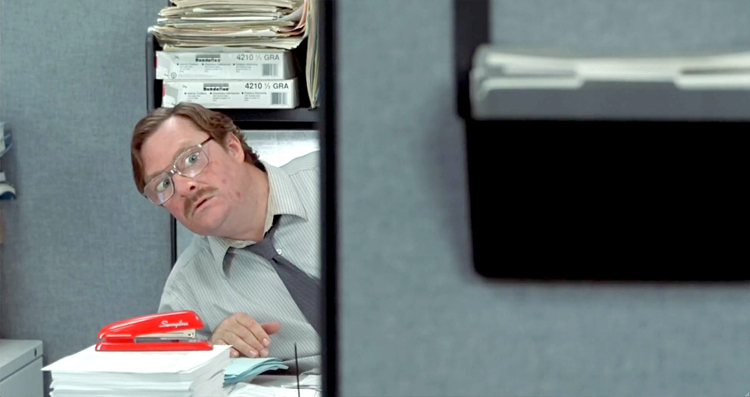 After the movie's success, red-spray-painted staplers briefly became a, well, staple offering on eBay. So in 2002, Swingline got in on the action and released the Swingline 747 Red Rio stapler. It apparently remains the company’s best seller to this day.

It’s a good thing—for the annals of comedy, at least—that Office Space was filmed when it was. In our current digital economy with its attendant transparency, Peter would have been out of a job long ago. So would Lumbergh, whose only function seemed to be walking around with a coffee cup to make sure people were working—a role that software can now perform more economically and more effectively (but far less hilariously).

Of course, one could argue that Peter wouldn’t have such a mind-numbing job today, because the task he performed in the movie would be automated. And without the mind-numbing job, he might have tapped into an internal motivation that went beyond simply “not being hassled” by his eight bosses, and he never would have visited the occupational hypnotherapist with the heart condition in the first place. But I digress…

The point is that the digital transformation is happening at the right time, and Office Space was made at the right time, and I’m just grateful for two things: 1) an operational system of record that eliminates so much busy work and frees me up for more interesting work than Peter Gibbons was stuck with, and 2) a head full of Office Space quotes, including this one: “Uh oh, sounds like somebody’s got a case of the Mondays.” You’d be surprised how often that one comes in handy. 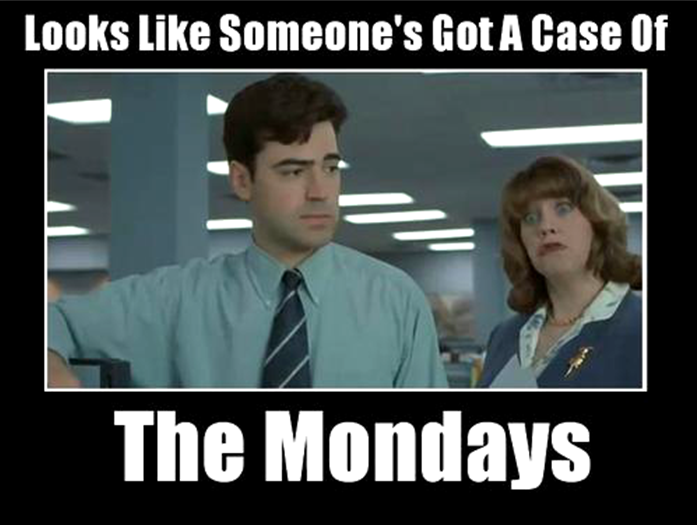