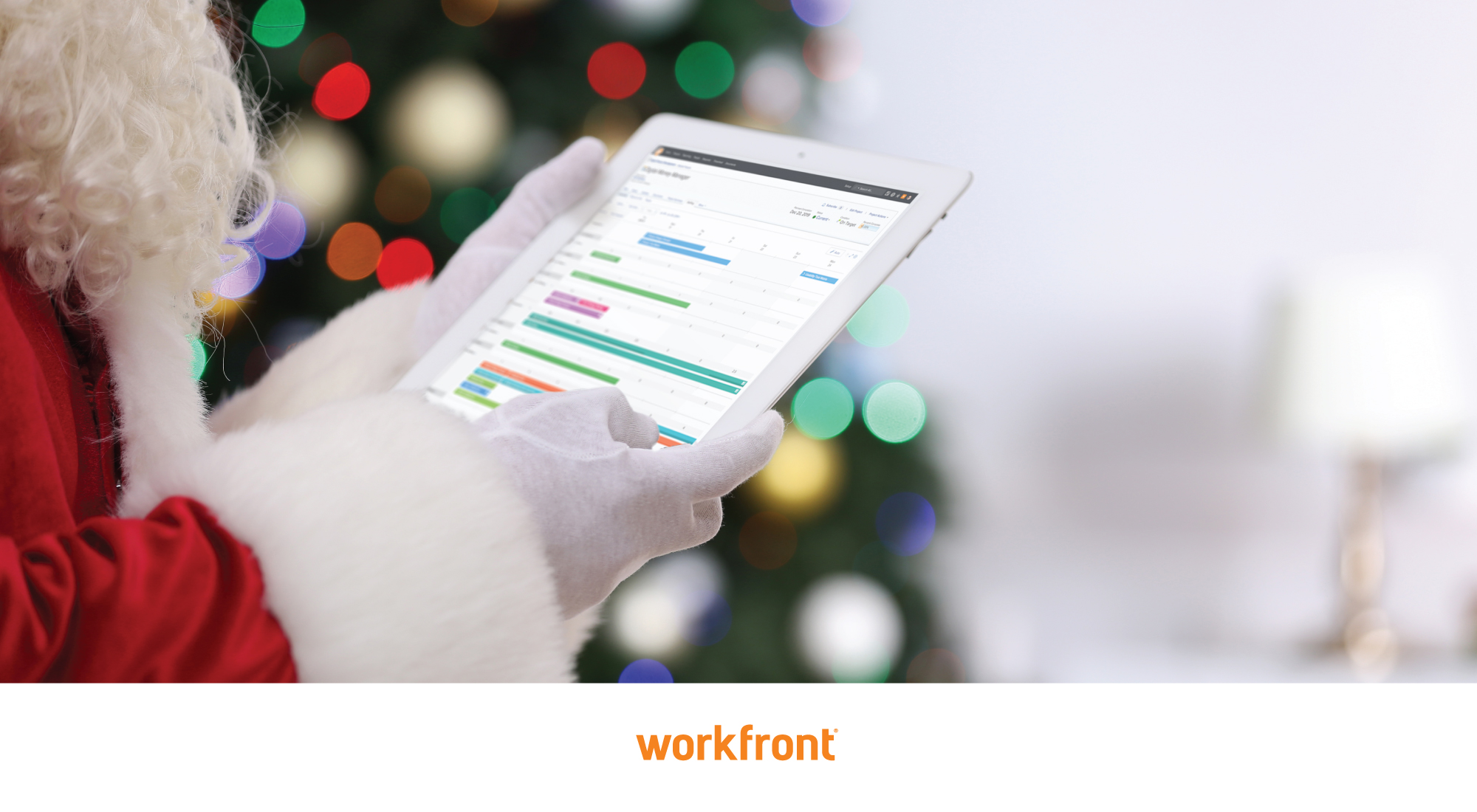 Much to many parents’ dismay, all children eventually reach the age when they start scrutinizing the stories they’ve been told all their lives. Wide-eyed wonder at the idea of a certain jolly old man sneaking in through the chimney on Christmas Eve turns into questions of “but how?” and “but why doesn’t he just use the front door?” Automatic belief in the existence of elves and flying reindeer gives way to curiosity about volume and logistics. Acceptance of an all-knowing naughty and nice list begins to wane.

What’s a parent to do, especially when there are younger siblings who still deeply, faithfully believe? One Workfront customer came up with a brilliant response—one that I plan to steal for my own family, since I haven’t been able to coherently explain to my kids what we do here at Workfront.

Earlier this month, John O’Sullivan, associate manager of Workfront capability at the pharmaceutical company Bristol-Myers Squibb (BMS), had to think on his feet when his perceptive young daughter put him on the spot.

“My middle kid asked me how Santa keeps track of all of the needed info, like wish lists, naughty/nice lists, cookie consumption, etc.,” O’Sullivan says. “I thought about it quickly and told her that he uses Workfront.”

But what about all of the film depictions of Santa Claus carrying around a heavy, leather-bound tome, with names and gifts inscribed in swirling calligraphy? O’Sullivan thought of a way to deal with that, too.

“Back in the day, of course, he used paper and pen,” O’Sullivan explained. “But now he's got a computer, so he bought Workfront for the North Pole. That way, he can track everything in one spot and be more efficient.”

After hearing this explanation, my first thought was: that’s a perfect response. My second thought was: I’d love to shake hands with the sales rep who pulled off that deal. Now to look into whose territory includes the North Pole… But first, a bit of history.

The legend of Santa Claus can be traced back hundreds of years to a monk named St. Nicholas, who it is believed was born sometime around 280 A.D. in Patara, near Myra in modern-day Turkey. Experts believe the world’s population at that time numbered between 190 and 256 million people, the vast majority of whom would not have qualified for gifts (since you must believe to receive, according to Santa lore, and it took a few hundred years for word to spread).

Today, the world’s population exceeds 7.5 billion people—an increase of more than 3,000% in the past 17 centuries. Even though a mere 39% of us (or 2.9 billion people) currently believe in Santa, the benevolent bearded one is still left with a nearly impossible task. While parchment and quill may once have been sufficient for Santa to “scale” his annual mission, the times have changed. An enterprise work management platform is required to successfully pull off a global effort of this scale, as seen in the handy infographic at the end of this post.

Even organizations that don’t yet serve 2.9 billion people, but have equally important missions, can benefit greatly from an enterprise work management application platform. In describing how Workfront impacts his day-to-day duties at BMS, O’Sullivan says the efficiencies gained are elf-evident. I mean, self-evident: “Creating a project plan could take a half-hour. We’ve reduced that to a minute or two. Reporting upon an organization’s book of work could take hours. It now takes a click of the mouse.” Such productivity gains are impressive enough to humans; just imagine how they’re impacting elf labor at the North Pole.

“As an end-user, having everything involving a project in one place is wonderful,” O’Sullivan says. “I don’t have to go spelunking through Outlook to find missing conversations—all communication is in one place. I don’t have to worry what version of a file is current; all the versions are collected in one place. ‘The Office Excel Spreadsheet,’ which can get corrupted or lost, has been replaced with one place to keep my work. I love it.” If an upgrade from Excel to Workfront brings this much joy, imagine how the elves feel about no longer having to sort through centuries of parchment scrolls to find the information they need.

After just the first year of using an enterprise work management application platform, O’Sullivan says, “We’ve saved our managers from almost 3,000 hours of tedium. As we’ve been expanding across our marketing organization, those savings have snowballed.” Yes, snowballed. Once again, a perfect choice of words.

Clearly, the benefits of centralized, platformed, digital work will make sense to any adult who has experience with the modern knowledge economy. But if you’ve ever tried explaining it in terms a child can understand, you’ll understand the brilliance of the whole Santa metaphor. Global initiatives that are so complex and complicated that they’re nearly incomprehensible to the human brain—now made possible, thanks to custom-built software tools that feel just a little bit like magic.

For his part, O’Sullivan is considering building a sample in Workfront to show his daughter as a proof of concept. “I thought more about how he'd organize this list more than I would normally care to admit,” he says. And for that, I’m forever grateful.

Santa Claus is coming to town.

Now instead of singing, “He knows if you’ve been bad or good, so be good for goodness’ sake,” I can just borrow O’Sullivan’s line and tell my kids, “You better be good because Santa is logging all of your outbursts as Issues.” The digital natives that they are, this might actually make more sense to them. And it’s all thanks to one inquisitive daughter and one quick-thinking dad.