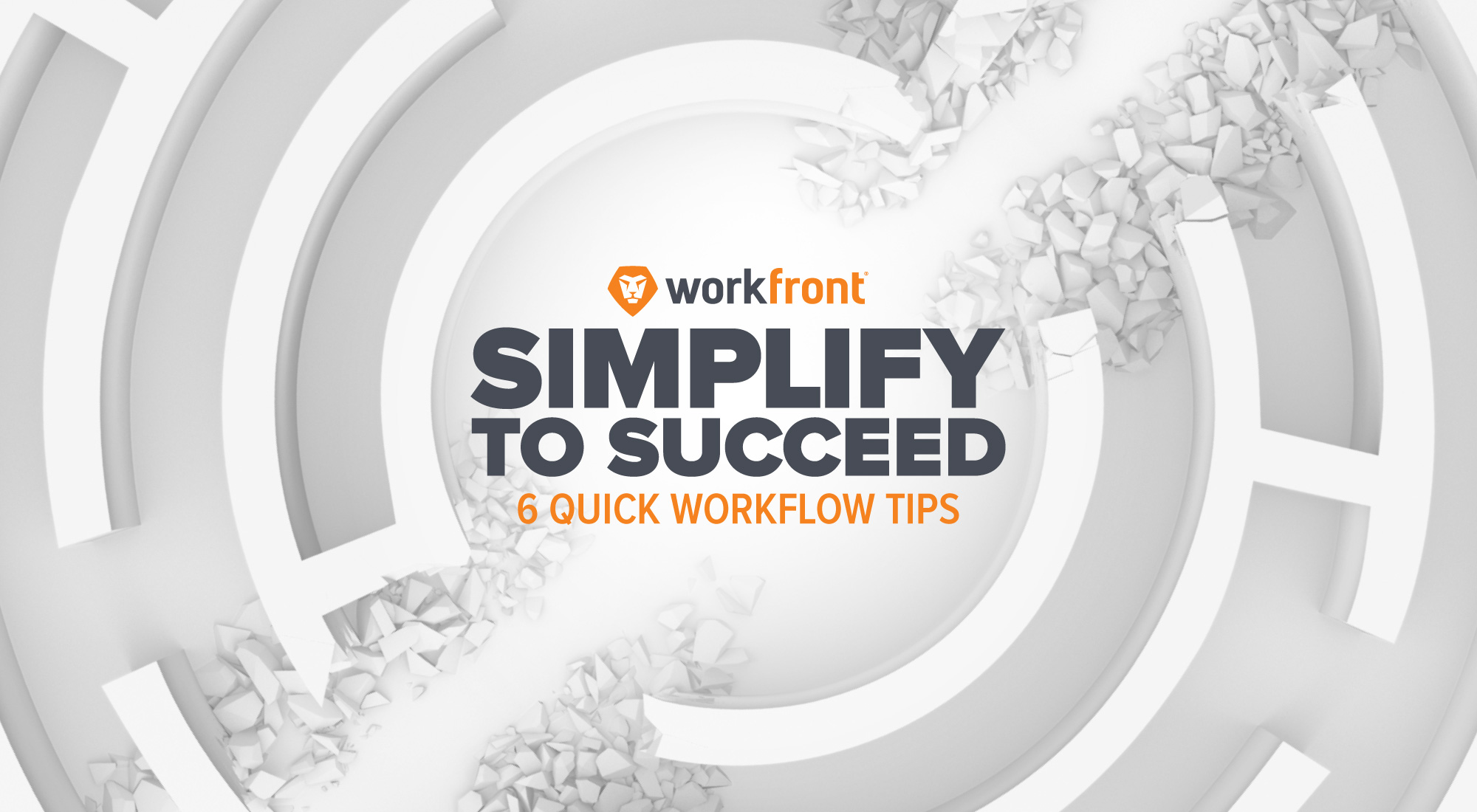 According to a Bain & Company survey, only 11% of public companies with more than $500 million in sales become “sustained value creators.” Two-thirds of the companies in this group stagnate, fail, or get acquired. That is a staggering statistic.

See "Keeping Your Work Organized … As it Happens" for expert advice on how you can simplify the way you work by staying organized.

“Complexity kills, but companies don’t need to succumb,” write Ron Kermisch and Jed Fallis in their brief of this data. “Leaders who recognize the threat can intervene and simplify their organizations before it’s too late.”

Take a look at your work processes, for example. More than three-fourths of knowledge workers use a complex combination of email, spreadsheets, shared documents, and network folders to manage their work.

A bit of information is tucked over here, a smidgen of data can be found over there, and if you ever want to assemble a coherent picture of where things stand, you better grab a caffeinated beverage and block out a couple of hours.

A growing number of companies, however, are leveraging project management software to:

Just ask Citrix Systems. According to Perry Hovanic, director of the group that designs and develops hardware platforms, his team transitioned from “fact-based data manually generated and managed” to “a single repository for real-time data tracking” that offers “an automated way to clearly show project status in relation to major milestones, delinquent tasks, and analytics.”

They traded in a complex, labor-intensive, and error-prone process for one that’s simpler, more automated, and far more reliable.

So, how do you get from point A to point B—from a dozen disconnected tools to one slick system? We asked Workfront Product Evangelist Chris O’Neal to share his expertise, and he suggested six simple tips:

One of the most effective change management principles is to select a “champion,” change agent, or evangelist. Look for someone to lead your pilot project who:

Work processes are complex because digital work itself is complex. The process of shifting from ad-hoc projects, manual workflows to automated, cloud-based workflows will be complex as well. That’s why O’Neal recommends running a pilot project in your chosen software solution that will demonstrate the benefits of a centralized and visible workflow.

"Start with something small and definable, with a worthy but achievable goal," he says. "Remember, you’re still trying to get buy-in. Let’s not go after the whole enchilada." 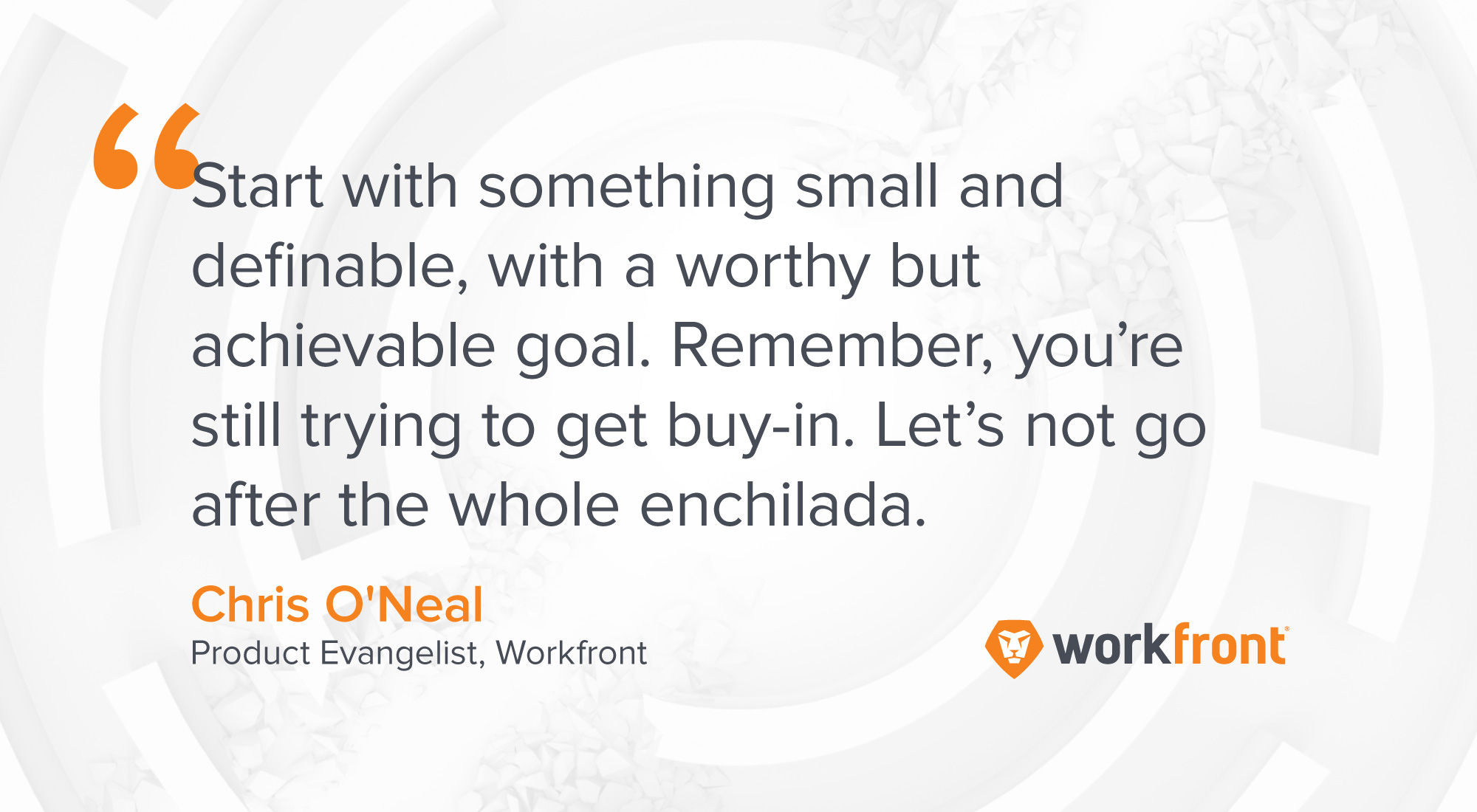 People are accustomed to the tools and processes they’re using. They don’t let go easily, unless you can demonstrate the advantages in a concrete way.

Whether you’re building a bicycle or a piece of digital marketing content, list every task required to take your pilot project from concept to completion, no matter how small.

As you do so, you’ll naturally perform a process audit. You’ll realize you have too many extraneous steps over here, but you’re missing some vital steps over there—coincidentally, in that exact part of the process where errors tend to occur.

For many of us, this will be the first time we’ve done such an audit in years; we’re so busy working in our processes that it’s difficult to carve out the time to work on our processes.

And even if they’ve never been defined, your processes do exist somewhere—in a mental map inside your head, in unspoken habits, in a collection of scattered emails and documents. To risk stating the obvious, you have to clarify and streamline your process before you’ll ever be able to examine it, improve it, or automate it.

Take a hard look at your pilot project. Why are you even doing this? What are you trying to get out of it? What will success look like?

In other words, begin with the end in mind, as Stephen Covey suggested in his book, The 7 Habits of Highly Effective People, which has become so ingrained in business culture that we forget it was once revolutionary—and worth revisiting.

"If your ladder is not leaning against the right wall," Covey wrote, "every step you take gets you to the wrong place faster." 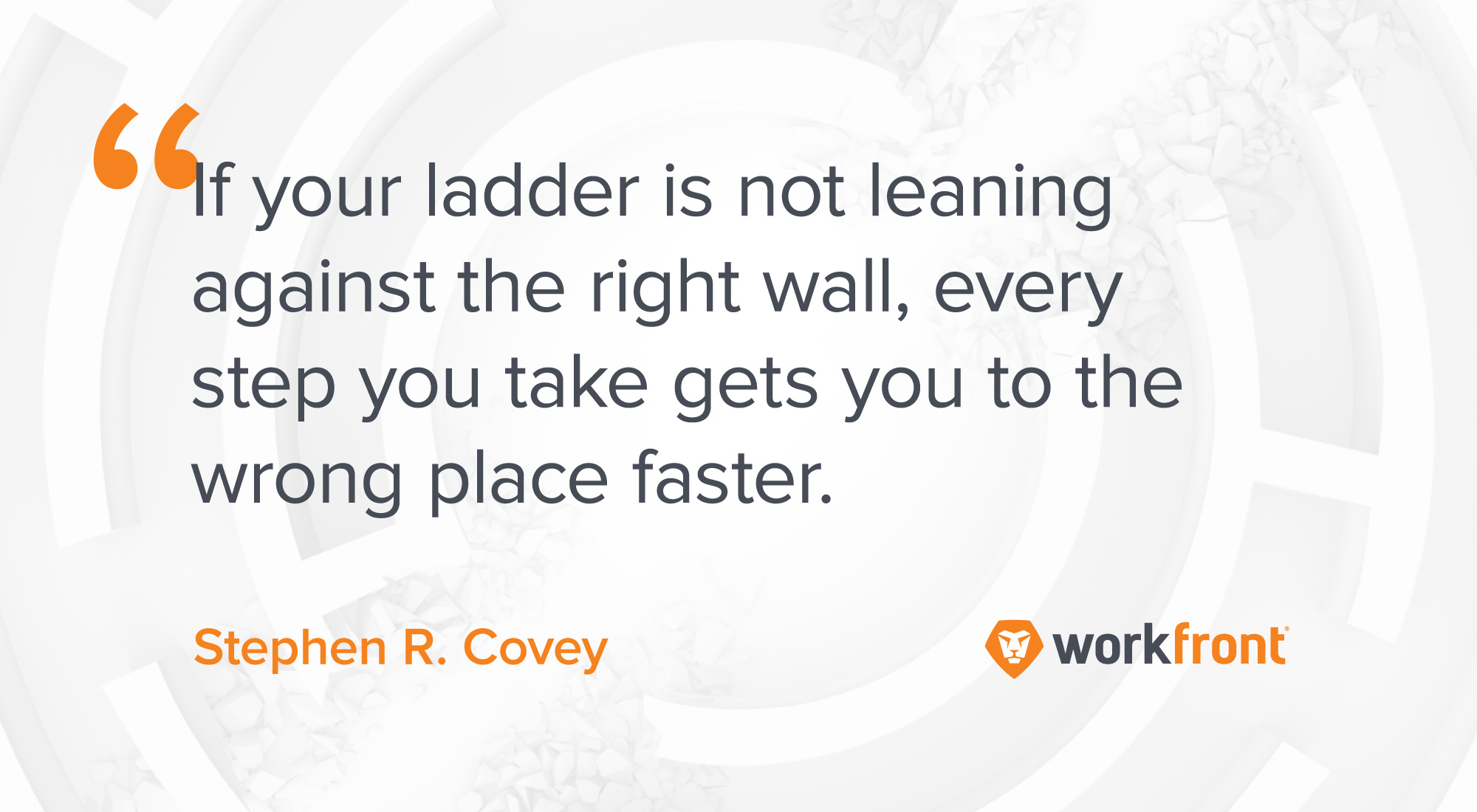 Once you have your ladder on the right wall, and you know how far you aim to climb, start putting the workflow you just defined into practice.

Because this pilot project will be sitting outside of your day-to-day work operations—a departure from the way you typically work—it’s especially important to give it a deadline. If you don’t, it can easily get swallowed up by everything else you have on your plate.

So put a stake in the ground. Create a project timeline, and invite all participants and stakeholders to collaborate on the project in the software tool.

“Rarely are things done within a single team anymore,” O’Neal says. This is often referred to as the Hollywood model of work.

“Our economy is in the midst of a grand shift toward the Hollywood model,” Adam Davidson wrote in The New York Times.

"More of us will see our working lives structured around short-term, project-based teams rather than long-term, open-ended jobs."

One of the great advantages of work-management software is the ability to assemble ad-hoc teams on a project-by-project basis. You add them to the project, and they’ll get an automatic email invitation to view all the details, deliverables, tasks, participants, and deadlines—whether they’re in your sector of the org chart or not. If deadlines shift, they’ll get automatically notified of that as well.

6. Repeat with Other Projects and Teams

“Start small, prove it out, then refine,” says O’Neal. After your first pilot project is a roaring success, use what you learned to send another project (with another worthy but achievable goal) through the system.

Involve a second team, and then a third. Move horizontally and vertically through the organization, simplifying one workflow at a time, making sure you celebrate after each small win. Word will spread, and other teams will want in on your success.

I quoted Kermisch and Fallis earlier, but their words bear repeating: “Complexity kills, but companies don’t need to succumb. Leaders who recognize the threat can intervene and simplify their organizations before it’s too late.”

As you shine a spotlight on your workflows, simplify them, streamline them, and automate them, you’ll reap the benefits of organizational simplicity. Projects will move more smoothly, cross-departmental teams can assemble and disband seamlessly, digital work becomes more visible and easier to manage, unnecessary tasks will slip away.

As Albert Einstein purportedly said, “Everything should be as simple as it can be, but not simpler.”

Except that’s not what he said. He actually said this:

"It can scarcely be denied that the supreme goal of all theory is to make the irreducible basic elements as simple and as few as possible without having to surrender the adequate representation of a single datum of experience."

Yeah, much less catchy, but it sounds more like Einstein. Is it any wonder that the simpler form of this sentiment is the one that has lasted through the ages? Simplicity is a beautiful thing.

Download our free white paper "How to Simplify the Chaos of Marketing Work" to learn more about how you can simplify your team's workflow.