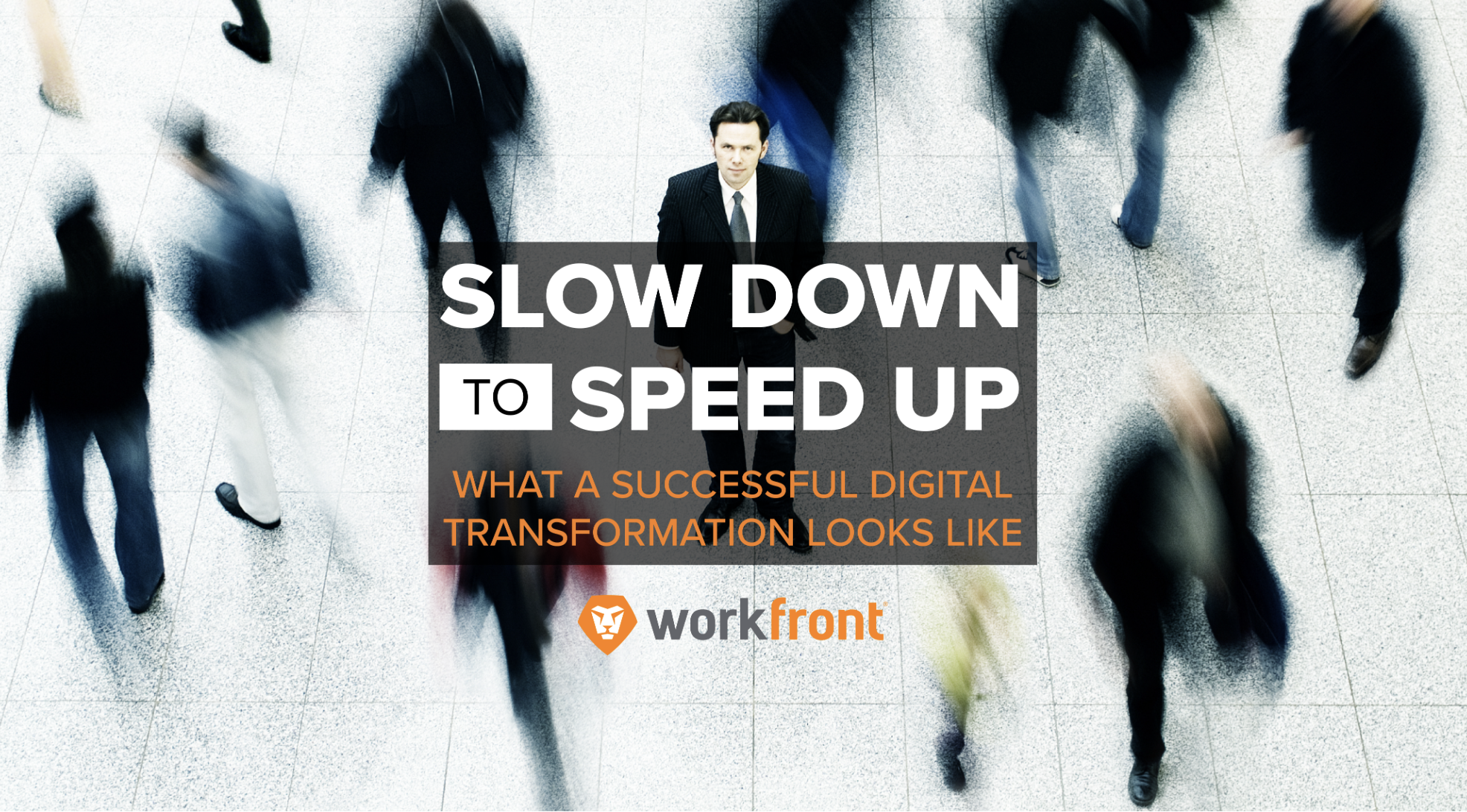 Almost 6 in 10 US workers (58%) say that their company is undergoing a digital transformation, according to this year's State of Work report.

That might sound like a lot, and in some sense it is. But you may be wondering, What's going on with the 42% of workers who say their company isn't going through a digital transformation? Do leaders at their companies believe they’ve already completed the shift to digital? Are those leaders not investing in digital solutions? Or perhaps there’s a misunderstanding about what constitutes a digital transformation?

Whatever the case may be, one thing is simple: People who don't realize that the digital transformation is both essential and ongoing are bound to experience crippling losses for the next several years (and possibly decades).

That said, the digital transformation — often called the Fourth Industrial Revolution — comes with its own set of challenges.

For instance, after reading the State of Work report, the business psychologist Tony Crabbe wrote, "As we enter the Fourth Industrial Revolution, there have been astonishing increases in information, communication, and distraction. The day-to-day demands of our inbox, meetings, and to-do lists grow as we mistake organizational uber-communication for real work. As we struggle to manage the information tsunami, our ability to recognize the important from the simply urgent diminishes: we lose perspective on what matters with our heads bent in the frantic reactivity of most workplaces. We scurry from task to task, message to message, in a vain but well-intentioned attempt to get on top of our inbox and to-do list.” Crabbe continues, “It is in this state that activity replaces thought; the immediate replaces the important; and the inbox squeezes out the time for imagination. It is also in this state that our desire to collaborate diminishes, as we endlessly seek to increase our efficiency, we realize that the most expedient approach is to do things alone; avoiding the speed-bumps of conversation and alternative opinion. If we are not careful, the ever increasing daily noise of communication and micro-demand will drown out our ability, and even desire, to think beyond our inbox, to create value and to collaborate meaningfully.”

Everything Crabbe writes here directly reflects what we’ve found in our report. We're facing a digital work crisis. To address this crisis, let’s look at findings on three fronts: communication, visibility, and process. In each case, as you'll see below, the answer is to slow down to speed up — to be more thoughtful, provide more guidance, and spend the effort up front to be clear.

On first glance, it might seem like complaining about a lack of communication means that people want more messages more frequently. But given that 62% of workers say that wasteful meetings get in the way of work and 55% say the same of excessive emails, chances are that people don’t merely want more communication. Instead, they want more effective communication — something that may be getting crowded out in what Tony Crabbe calls “organizational uber-communication.” In short, the best way to improve communication may be to have less of it but make it more thoughtful.

Perhaps surprisingly, 38% of workers say they never know what their company’s top priorities are and how their work ties to those priorities. Likewise, 61% say that while they’re clear on their personal work and priorities, other people’s work is a mystery. In addition, nearly half of respondents (45%) say they’re unaware on a monthly basis that work has been assigned to them, with men being more likely than women to say this (48% vs. 42%).

Critically, this lack of visibility doesn't necessarily mean that people want access to more spreadsheets overflowing with data. In fact, when we asked a range of questions about data, only 4% say they want more data compared to 40% who said that they have good data but struggle to make the right decisions with it. 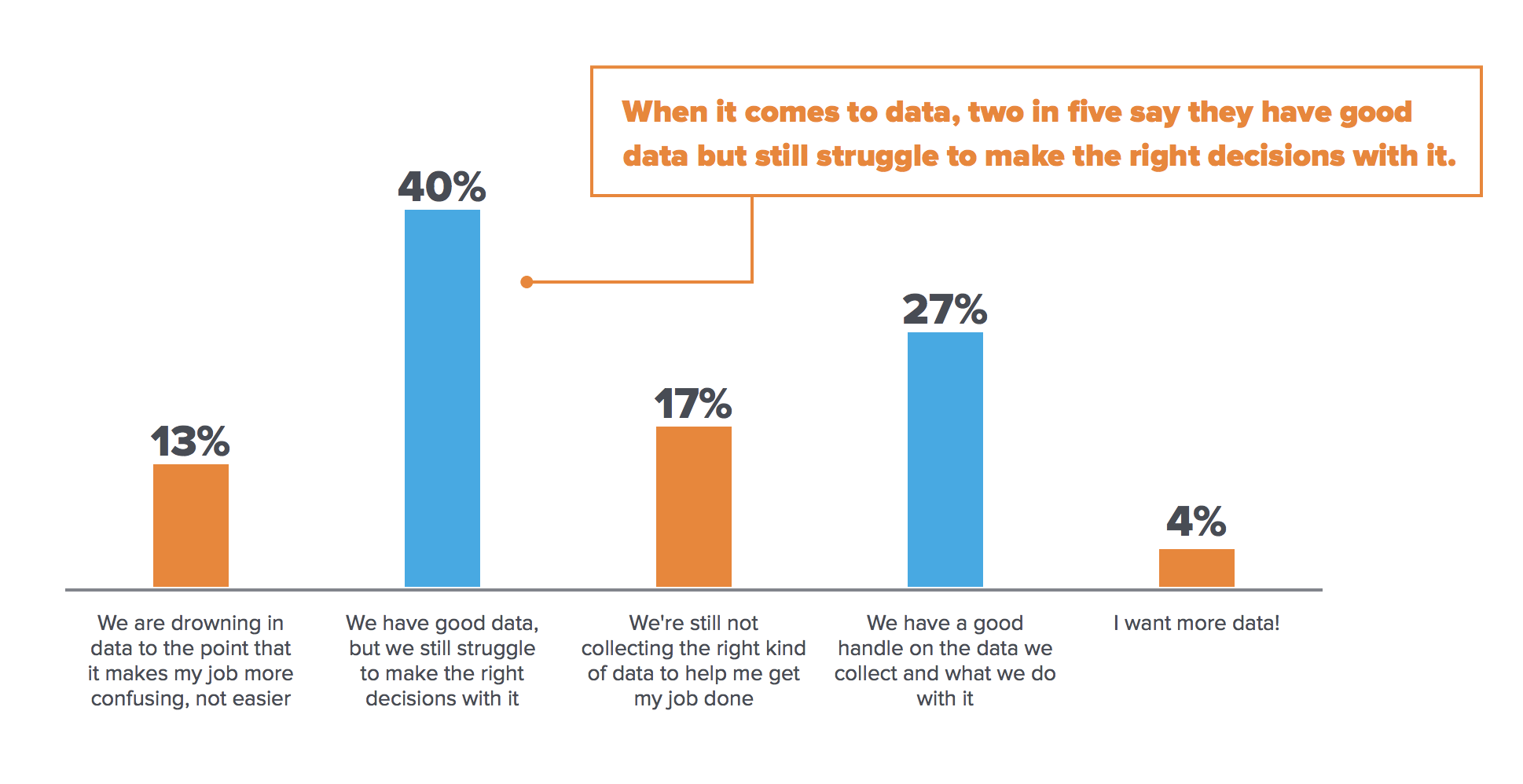 In light of this, the answer that people are looking for might be just the opposite of what many leaders think. That is, instead of opening up full visibility to every single aspect of your business, it might be more effective to focus on giving guidance on what matters most to each individual employee and little else. Show them exactly how their job ties to your company’s priorities and how other people’s work ties to their own. Most importantly, make sure they know when work has been assigned to them.

When asked to choose the single thing that would help them do more with less, 33% chose “instituting better processes.” Compare this to 26% of people who chose “being able to block out time in your calendar to actually get work done” and 21% who chose “having fewer meetings throughout the week.”

Taking into account how many tasks are being worked on at any given moment, it’s perhaps more important than ever to establish clear processes and train team members on how to manage those processes. You might think that you’re moving too quickly to worry about process, but the exact opposite is likely the case. Work out clear processes now and train your people on how to manage those processes, and you’ll see your output quickly improve.

Whether we’re talking about communication, visibility, or process, the best solution is generally the same: react less and think more. Don’t give in unwittingly to the tyranny of the urgent or to doing things for the sake of doing them.

As Tony Crabbe writes, “If we want to succeed in the Fourth Industrial Revolution, we will need to think more than ever, as we grapple to make sense of the seismic changes driven by AI and robotics; we will need to reimagine work, and innovate at an ever increasing rate; and we will need to collaborate across ever more fluid networks. The Fourth Industrial Revolution is upon us, and it is scary and exciting. If we want to thrive in this digital era, we have to manage our people in a way that enables thought, imagination, and collaboration to flourish; we have to help them escape the burden of the daily overwhelm."

We have to help them escape the burden of the daily overwhelm.

Once we do this, we’ll be able to make the most of the digital transformation.