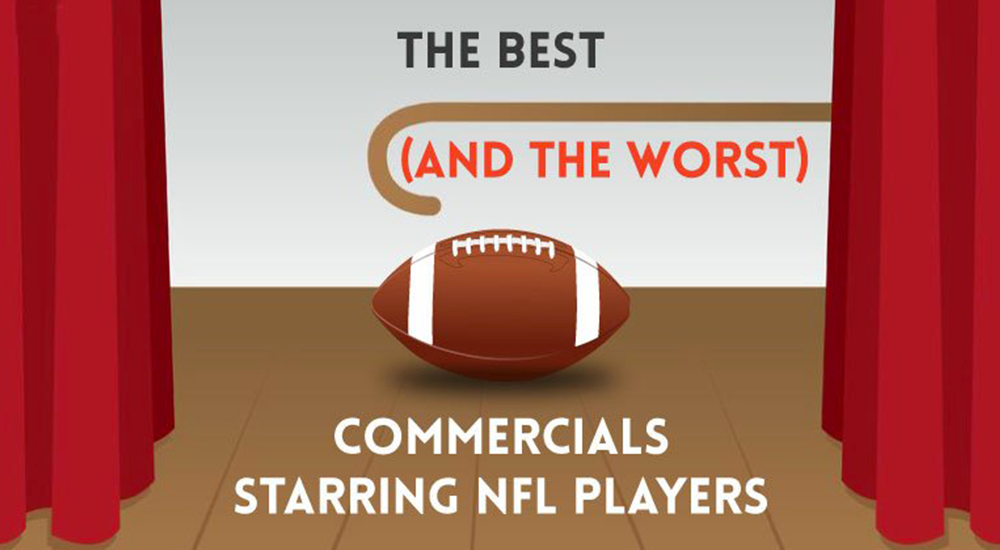 The Best (and the Worst) Commercials Starring NFL Players

Using celebrity pitchmen in marketing campaigns is one of the oldest tricks in the book. Why do marketers love to play the fame card in their advertisements? It’s a good question, as the effectiveness of such ads is hardly conclusive. Nonetheless, there is a popular belief that consumers trust the celebrities they admire. Furthermore, an ad with a recognizable face can be more entertaining, especially if the pitchman is used correctly.

With the NFL season finally under way (go Colts), we thought it only appropriate to take a look at some of the best, and worst, commercials featuring NFL players. There is one caveat: these are not the typical endorsement for Nike or other athletic gear. These are commercials featuring players pitching non-sports related products. After all, it’s one thing to sell shoes and Gatorade; it’s another thing entirely to sell bath soap, biscuits or pantyhose.

Respecting the History of the Game

It’s easy to get caught up in the latest commercials, but we need to remember not only the history of the game but advertising with NFL players as well.

The Mean Joe Green spot for Coca-Cola was first released in 1979, and it continues to be viewed, by many, as one of the most iconic of the company’s commercials. Joe Green had a reputation for being a mean and intimidating player, hence the nickname, but this commercial shows that there is one thing that can make even this tough man smile. And that is, of course, a Coke.

This spot from Miller Lite, like Coke, was a success because it used their NFL pitchmen in a way that went against their reputation.

And then there is Joe Namath selling pantyhose. I’ll just leave this here for you:

Quarterbacks have been the dominant pitchmen on national campaigns. And they’ve done it for long sustained drives, much like they do during a game. The two most prolific pitchmen currently working are Peyton Manning and Aaron Rodgers.

Manning has such a large body of work to choose from. He’s probably the most prolific pitchman coming out the NFL. He’s not everybody’s favorite. And because of his extensive portfolio, there are plenty of opportunities for excellence and crap. Probably my favorite of all time is his work with MasterCard and the “Priceless” campaign.

What makes this campaign so successful is that it downplays Manning’s celebrity status and turns him into an everyday person.

Another successful campaign that turns an athlete’s celebrity status upside down is the State Farm Discount Double Check campaign with Aaron Rodgers. Aside from one crazed fan who continually shows up in the ads, everyone else seems oblivious to the fact that Aaron Rodgers is famous, or even a football player at all.

In perhaps the best move of this ad campaign State Farm followed up this series of ads with one featuring an Aaron Rodgers look-alike. As this guy signs footballs, speaks to the press, and gets stalked by that same crazed fan, State Farm reminds us why it is always best to “double check.”

Defensive Play of the Game

Other than the stars listed above, it’s hard to recall defensive players getting as much air time as those on the other side of the line. That’s changed lately as superstars like Clay Matthews, J.J. Watt, and Richard Sherman have emerged as excellent pitchmen.

J.J. Watt is becoming the next Peyton Manning. He can be seen pitching Verizon, Reliant Energy and Gatorade on a national level. He’s a charismatic person, has a terrific presence, and the camera loves him. His latest campaign for Reliant Energy is funny (synchronized swimming FTW), but it’s his six-second appearance in this Verizon NFL Mobile commercial that still makes me laugh every time.

Clay Matthews and Richard Sherman are two other defensive superstars who can add “pitchman” to their resumes with national spots for Campbell’s Chunky soup and Fathead. Honorable mention goes to Ray Lewis and his work with Old Spice.

Prior to the 2014 Super Bowl, Duracell released a highly successful commercial featuring Seattle Seahawks’ Derrick Coleman, the first deaf offensive player to ever play in the NFL. Much like the non-traditional formation of the Wildcat, Coleman isn’t really pitching a product. However, the ad is so powerful that I had to include it on the list. The commercial focuses more on his personal story and struggle for success than on his fame as a football player or even his reliance on a particular product.

Another odd but successful commercial, in my opinion, is Craig “Ironhead” Heyward pitching Zest Body Wash. Heyward was one of the most bruising fullbacks to play the game, and Zest used him to introduce body wash to the male consumer.

I don’t know how successful the campaign was overall, but it worked on me because I actually bought this product because of this commercial. The writers were smart to answer any male objections to using something other than a bar of soap and a washcloth and Heyward’s personality, and delivery made him a fantastic pitchman.

The Butt Fumble, introduced to the world by then New York Jets Mark Sanchez when he ran into the butt of his own lineman and fumbled the ball, is now synonymous for epic and often downright bizarre moments of failure.

Let’s be real and acknowledge that NFL players are stars because they can play football, not act. We’ve seen a small sampling of the gems above, but to find the absolute worst acting, you have to travel to the local markets where the players have sponsorships with area businesses. Be warned, these are butt fumble bad.

And then there is Jake Delhomme selling biscuits in a commercial might be so bad that it’s good:

Finally, the Buttfumble Award for absolute worst commercial, in this reviewer’s opinion, belongs to Joe Flacco, quarterback of the Baltimore Ravens and MVP of Super Bowl XLVII (I also nominate him as the worst pitchman). Flacco has a reputation for lacking personality and for being a bit wooden. In this spot for a local Pizza Hut, Flacco makes Pinocchio look like a yoga instructor.

However, he may have redeemed himself by making fun of everything I just wrote about this his new commercial for Pepsi and Frito-Lay.

What Can Be Learned from These Campaigns?

Using a celebrity pitchman in a marketing campaign can be a huge success, but only when they’re used appropriately to bring humor or emotion to an advertisement. Some of the most successful examples tend to stick to a clear formula: it’s best to either double down on the pitchman’s reputation, or flip it on its nose and go 180 degrees in the other direction.

What are your favorite commercials featuring NFL players? What are those most worth of a the Buttfumble designation? Share them in the comments below.