The Tale of Three Cars

This article is a response to Workfront’s 2017-2018 State of Enterprise Work Report. In particular, I am responding to three findings about the future of automation.

These findings reflect three attitudes towards the future that are important: positivity about automation, preparedness for the future, and the desire to use automation as a chance for growth and innovation. The article links these findings to a tale of three cars.

See our post "3 Things to Focus on to Become the Employee of the Future" to find out how you can start preparing for the future workplace.

Eighty-eight percent of respondents recognize "there are a lot of opportunities for those with the right skills in the automated workforce."

Perhaps the most iconic examples of automation are self-driving cars—and the most fear-inducing.  Particularly for men, being a professional driver (of a truck, van, taxi, or bus) is one of the most common jobs across the world. At a stroke, self-driving cars and trucks could replace all those jobs.

Automobiles, once the greatest symbol of industry and freedom, will start taking our jobs and turning us from drivers into passengers. It is easy to imagine a future like this as automation takes more and more jobs.

In fact, Thomas Frey, a leading futurist, predicts that by 2030, two billion jobs that exist today will be automated out of existence (for humans). Yet, is that really likely?

When ATMs were introduced, they automated a lot of the work of bank tellers across America. Yet, the number of tellers didn’t decrease; it increased.

Fear of the future is not helpful, it will make us act more defensively towards automation, or even avoid the topic. 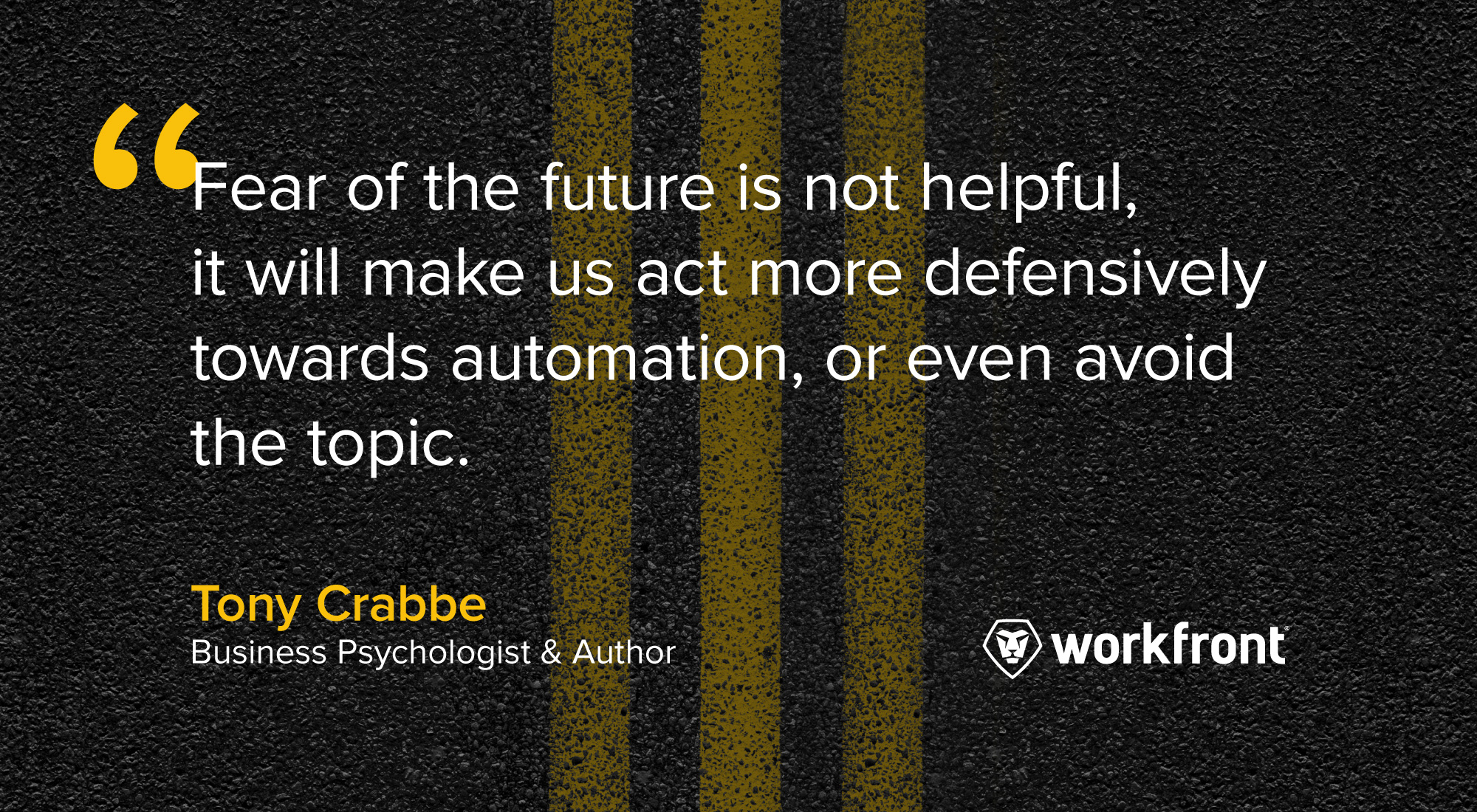 So it was good to see 88% of respondents express positivity about the opportunities in automation. A more positive response, like we’re seeing in this survey, triggers more curiosity and creativity. This is what the bank tellers showed—and it served them well.

Eighty-one percent said, "I am prepared for the workplace of the future."

Many of us have heard of Moore’s Law. This is the observation that computing power is increasing exponentially.

To put this in context, Intel engineers applied the rule to a VW Beetle. If a Beetle had improved at the same pace as computers since 1971, by 2014 it would be able to drive at 300,000 miles per hour, go two million miles per gallon, and this fantastic car would only cost you four cents!

Bill Joy, the founder of Sun Microsystems, explains that the automobile is 20 times faster than walking, and jet travel is 100 times faster. Both of these technologies changed the world. Nothing in our imagination or experience can help us to understand the impact of things that are one million times faster.

One thing is certain: our world, and the skills required, will be nothing like today. While fear of automation is a risk, so is apathy. The fact that 81% of respondents felt that they are prepared for the workplace of the future could be a cause for concern. None of us are. 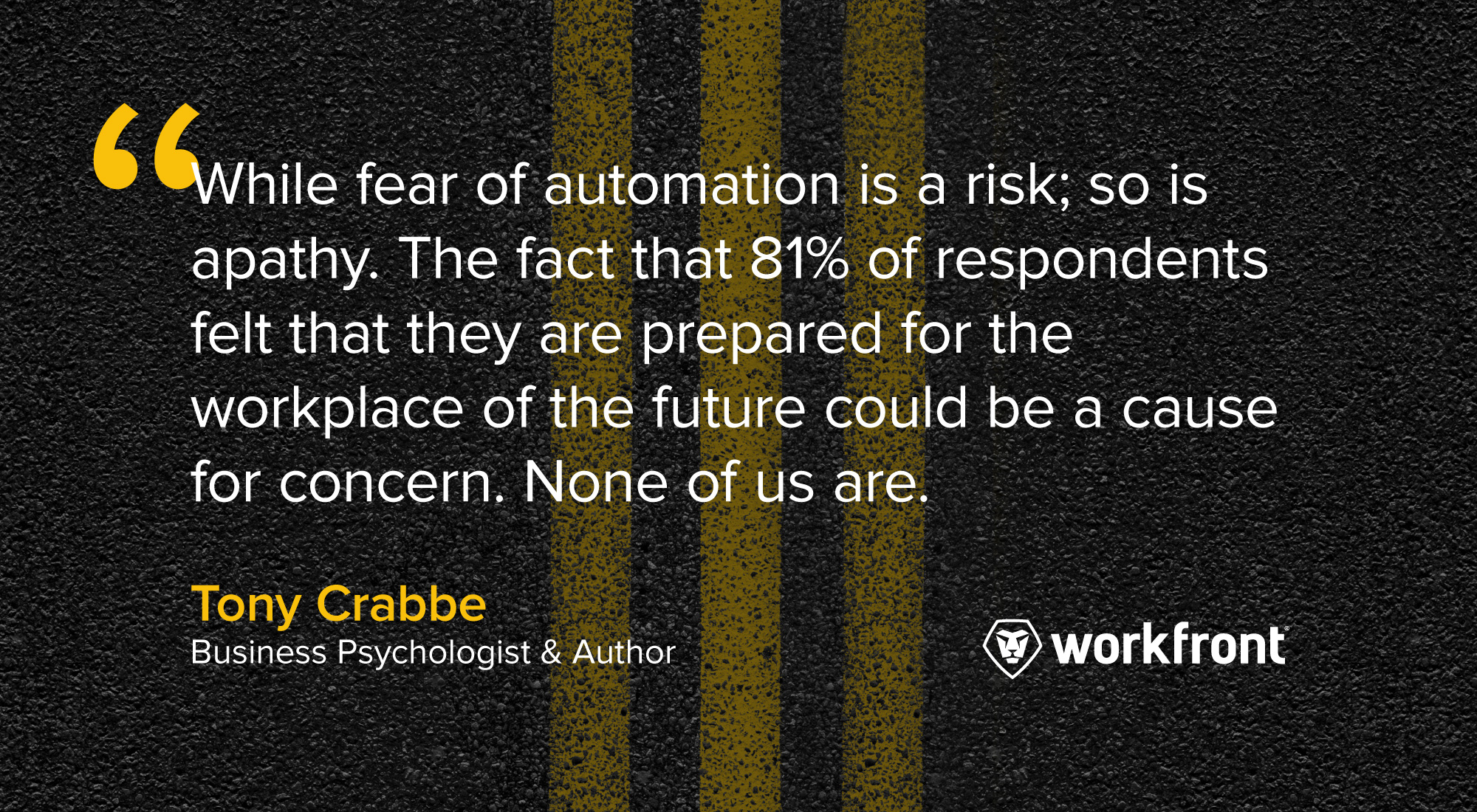 Eighty-six percent of respondents felt "the use of automation in the workplace will let us think of work in new and innovative ways" and 82% were "excited to learn new things as the workforce moves toward more automation."

CEO Rodrigo Hubner Mendes is paralyzed from the neck down. Yet he is sitting on a racetrack in Brazil, in a car without pedals and without a steering wheel. You probably think this is one of Waymo’s cars. It is not. This is a much more amazing car.

It is a Formula One racing car, and Mendes is about to drive it with his mind! Using technology that reads his brainwaves, developed by the Australian technology company Emotiv, he will think his way around the track.

"It was very challenging to really concentrate and feel that I was controlling the car. The team leader came to me and asked me, 'Are you OK? Can you start?'

"Suddenly, it was me, the car, and the track. I gave the first command, which was to accelerate, and the car started running. It was unbelievable."

In think-driving that racecar, Mendes showed the incredible power of the concentrated human mind, enabled by technology.

Through history, every time technology decreases the effort required to do something (and therefore the jobs), it also increases our capabilities. However, we have to use this capability productively.

Automation is freeing us up from a lot of manual, repetitive tasks, but are we using that capacity for more thinking and creativity?

Dan Nixon, economist at The Bank of England doesn’t think so. He suggests that one of the big reasons the global productivity growth has dropped to below zero since 2007 is the reduction in focused attention due to digital distraction.

So far, we seem to be using this free capacity for more communication and entertainment. To achieve more we have to expect more from ourselves intellectually. We have to think deeper, learn more, and create better. 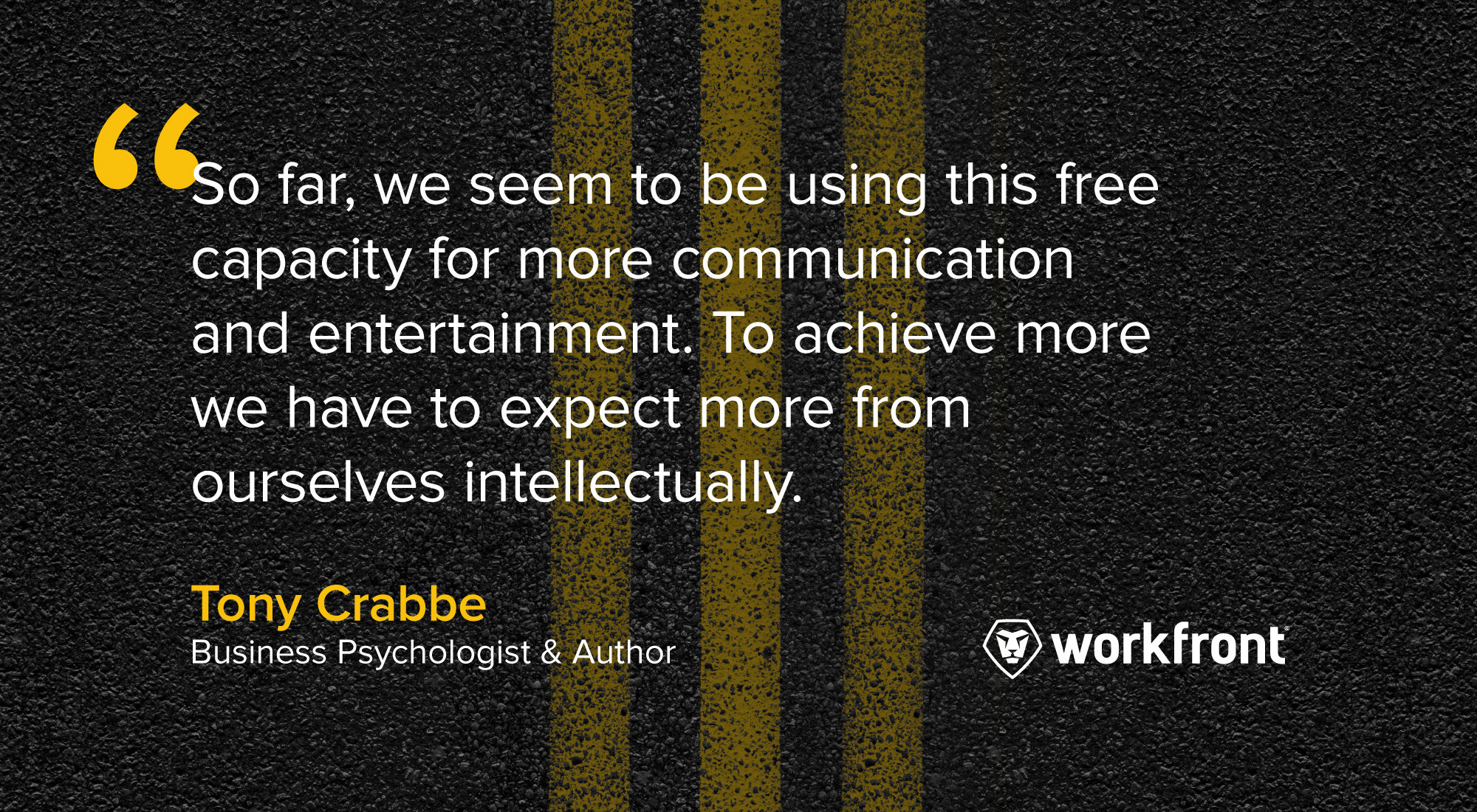 Automation will fundamentally alter our work and our lives. That much is certain. How these technologies affect us, however, is up to us; and our response will determine our future.

We can take the driverless car approach, fear an inevitable future as passengers to technology, and so fail to engage with automation. We can ignore the lesson of the Beetle, and reassure ourselves the future will be quite like today; and so fail to transform ourselves as technology transforms our world.

Or we can take the Emotiv approach: really concentrate and bring the full force of our intellect and imagination onto the opportunities arising from automation.

So there you have it. The increasingly automated future is a Tale of Three Cars. Which car best represents your current approach?

See "5 Trends in Artificial Intelligence that are Changing the Way We Work" to see how AI is already in use today and how it's influencing the future of work.