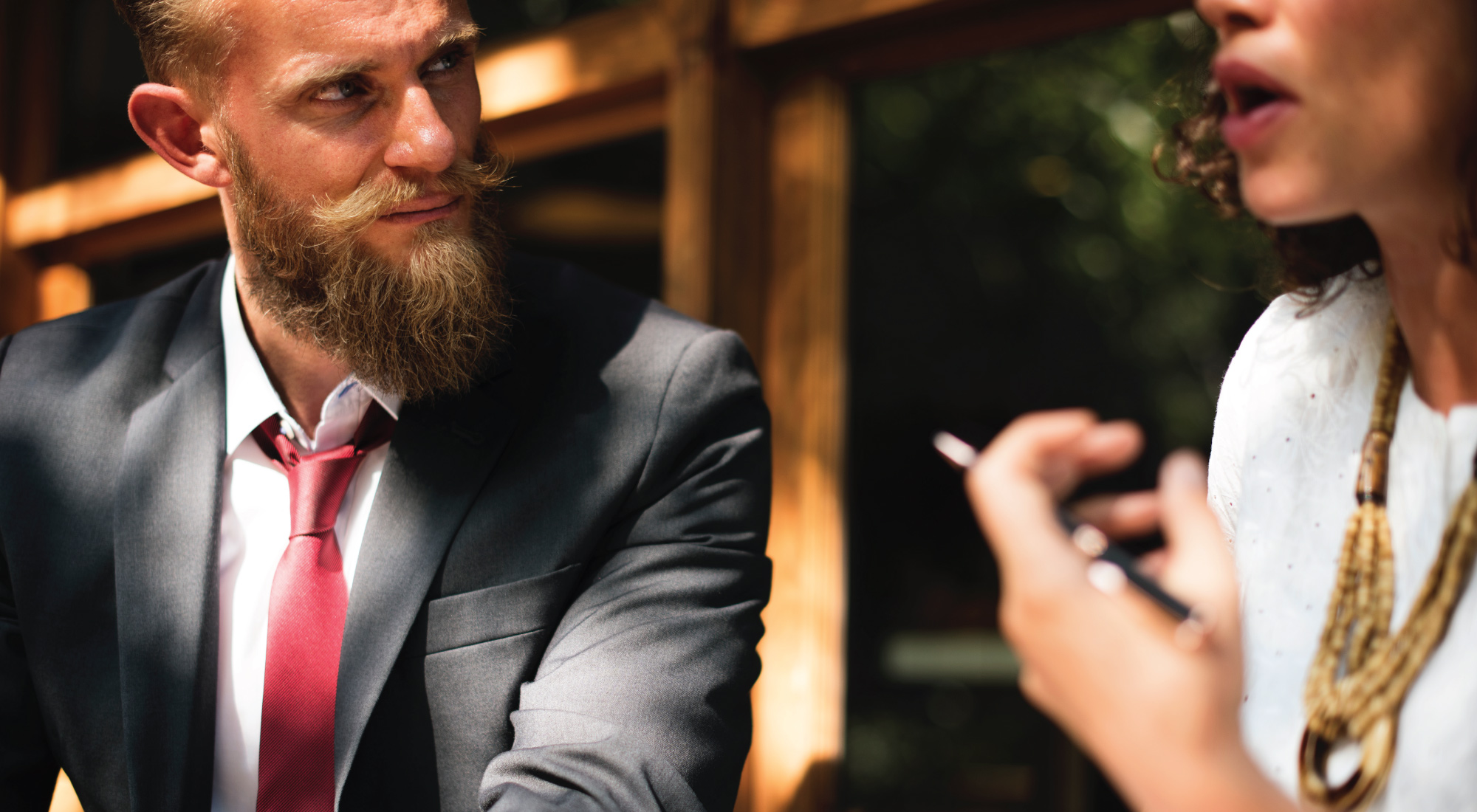 Up and down Utah’s Wasatch Front, where Workfront is headquartered, a series of billboards featuring oversize images of human ears have assaulted the eyes of those who travel I-15 for years.

“We Hear You” is the slogan of local car dealer Ken Garff, and they have extended the visual metaphor almost beyond human comprehension. One ear. Two ears. Elephant ears. Mr. Potato Head ears. And while the ads are a bit gimmicky, they do make a salient point—a point that enlightened minds have been trying to make for centuries:

“We have two ears and one tongue so that we would listen more and talk less.” —Greek Philosopher Diogenes, 400 B.C.

“If speaking is silver, then listening is gold.” —ancient Turkish proverb

“Blessed is the man, who having nothing to say, abstains from giving wordy evidence of the fact.” —novelist George Eliot, 1800s

Why the ancient and modern campaign to encourage humanity speak less and listen more? Because it’s the only way to learn, understand, and empathize with one another. And most of us are terrible at it; you won’t find pages of collected quotes from the world’s best books encouraging us to open our mouths more.

Despite the age-old origin of the problem, which points to some fundamental aspect of human nature, listening is more important than ever in our modern culture, which is driven by distractions that would have been unfathomable to the sages of old. With that in mind, put on your listening ears and read on for five effective ways to practice active listening in the modern world of work.

1. Listen With Your Whole Body

In his book, Done Right, Workfront CEO Alex Shootman interviewed empathy expert Brian Carroll, who believes most leaders make the mistake of “tuning in for eighteen seconds” to what other people are saying as they look for a shortcut to a decision. His advice? Listen fully with your ears (obviously), but also with your mind (by being genuinely curious), and with your eyes (by watching for nonverbal cues and micro-expressions). You should even be “listening” in this way while you’re communicating with others. “If they don’t understand what you’re saying — or don’t like it — you’ll read it in their faces and in their posture,” Shootman writes. 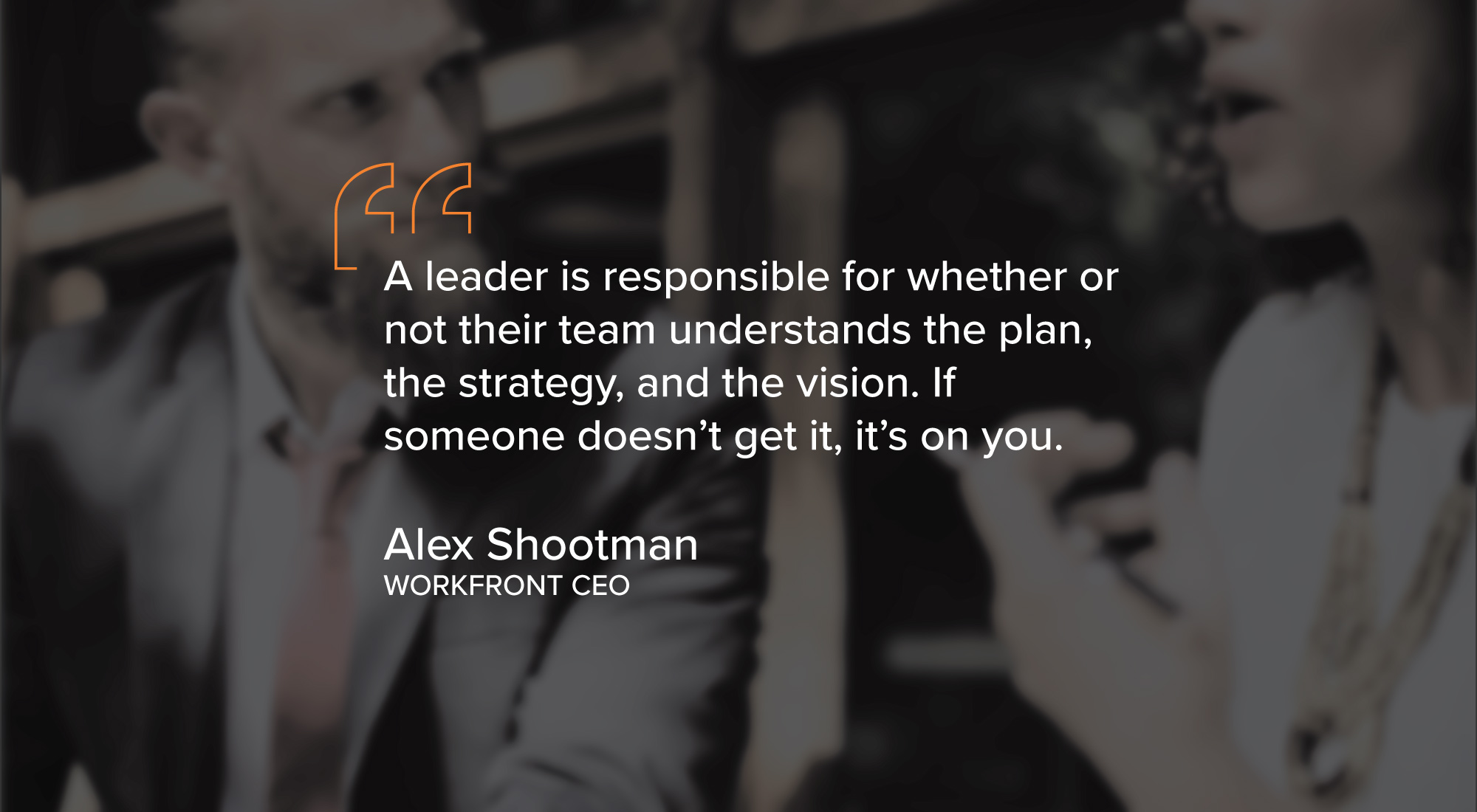 2. Repeat What You Hear

It’s possible to listen to the words someone is saying without actually hearing them. After all, everything that comes in through the ears gets filtered through our own minds. Remember the viral “yanny” vs. “laurel” sound clip, which was 2018’s version of the blue dress/gold dress controversy from 2015? We often hear what we expect to hear, and our brains are good at filling in the gaps.

To avoid misunderstandings in higher stakes situations, like those you encounter in the workplace, it’s important to repeat aloud what you’ve heard to ensure you’ve understood what’s been said. Try, “What I’m hearing you say is …” or “So, you mean this…” Not only will this help you match the speaker’s intent with your interpretation, Shootman says, “you’ll also demonstrate a model of leadership behavior that others will start to follow.” And that’s good for everyone. Empathy is contagious.

For true mutual understanding to take place, you need to communicate from a place of inquiry, which requires that you remain “curious, undecided, open-minded, and genuinely willing to listen,” writes my colleague Shelbi Gomez. The opposite of inquiry is advocacy, which involves a much higher degree of confidence, passion, pre-decision, and certainty. Obviously, both types of communication can be appropriate, depending on the situation. But if you fall into the trap of advocating for your position when it would be more fitting to invite input and listen to other perspectives, you’ll diminish trust and get in the way of effective decision-making.

In his book Creativity, Inc., Pixar founder Ed Catmull talks about how his team’s failure to be “open to reasoned opinions, even when they contradicted our own” sealed the fate of not just a single film, but the entire hand-drawn animation legacy. The Princess and the Frog was Catmull’s attempt to revive 2D animation, and the film more than delivered on its promise, but the marketing experts at Disney warned that putting “princess” in the title would narrow the audience, leading moviegoers to believe the film was for little girls only.

“We pushed back,” Catmull writes, “believing that the quality of the film would trump that association and lure viewers of all ages, male and female.” But the marketers were right, and hand-drawn animation at Disney died with that film’s lackluster performance. “To say that we are making a great film but not listen to the input of experienced colleagues within the company imperiled the quality we were so proud of,” he concluded.

Notice that “princess” hasn’t been in a Disney or Pixar movie title since. The Rapunzel adaptation became Tangled, and while Anna and Elsa of Arendelle are most definitely princesses, their movie was titled Frozen.

4. Take Ownership Over How Others Hear You

“A leader is responsible for whether or not their team understands the plan, the strategy, and the vision,” writes Shootman. “If someone doesn’t get it, it’s on you.” You should never assume that what is clear to one person will be understood by someone else in the same way, he adds. (Case in point: “yanny” vs. “laurel.”) That’s why Shootman embraces a wide range of communication methods, believing in the “heightened frequency, reduced complexity” approach. While one person might respond best to a two-minute video shared by email, another person may absorb the message better in an all-hands meeting, or an internal memo, or a targeted IM message. Try them all, as long as you never stop listening along the way.

“If you want to be heard and understood — and lead modern work — you need to show genuine interest in others and share your messages generously rather than sparingly,” Shootman writes. “And you need to accept that people are time-sliced and messages get fragmented.”

Lee Odden of TopRank Marketing in Minneapolis is convinced that listening is the first step to better internal communications. And he’s introduced a formal listening tool in his organization, which takes the form of a monthly staff poll. Questions include:

“In marketing, when you understand the goals, needs, and pain of your customers, you can use the insight that surfaces to architect more effective communication,” says Odden. “There’s an opportunity to do that with internal company communications too.” 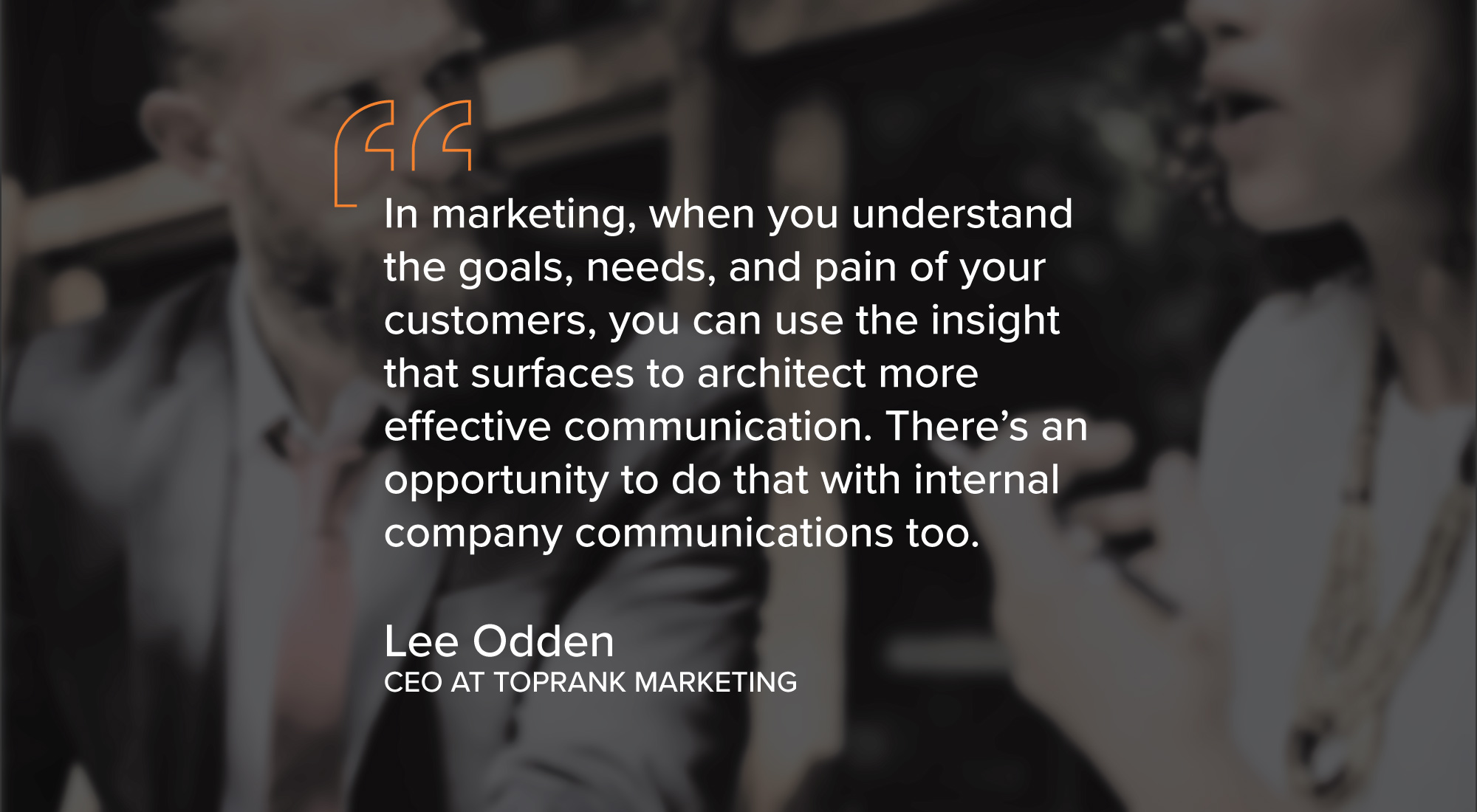 By regularly inviting specific input from his staff, Odden is able to tease out immediate opportunities for addressing concerns and solving problems—and he can compare response trends over time. Even better, every employee knows they have a consistent venue for contributing input. Just make sure you visibly act on what you’re learning. Gathering feedback endlessly without ever taking action will only undermine your efforts. You might give the appearance of listening, but no one will feel heard.

“If you’re still in any doubt about the importance of empathy and listening to your team,” Shootman concludes in his book, “flip the thinking around. If you don’t care about how your team is feeling and you don’t care about what worries them — or inspires them — how can you possibly find the words to make their work matter?”

When you listen to your team—genuinely, regularly, deeply—they’re more likely to listen in return, fostering true connection, understanding, and team cohesion that will affect everything your organization does. The ability to listen carefully may not be a natural gift for most of us (just ask Diogenes, or George Elliot, or local auto dealer Ken Garff), but it is one that’s worth cultivating. 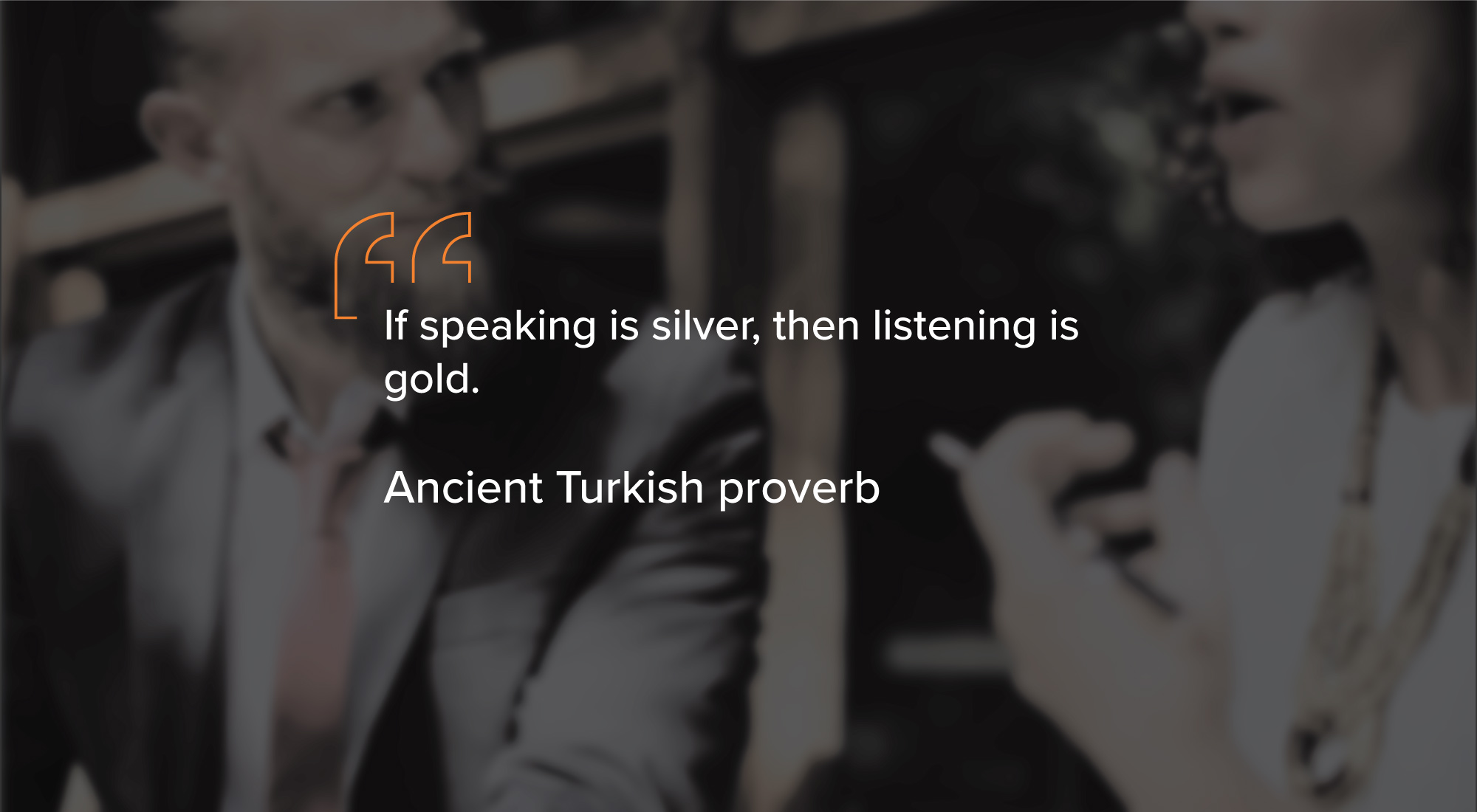