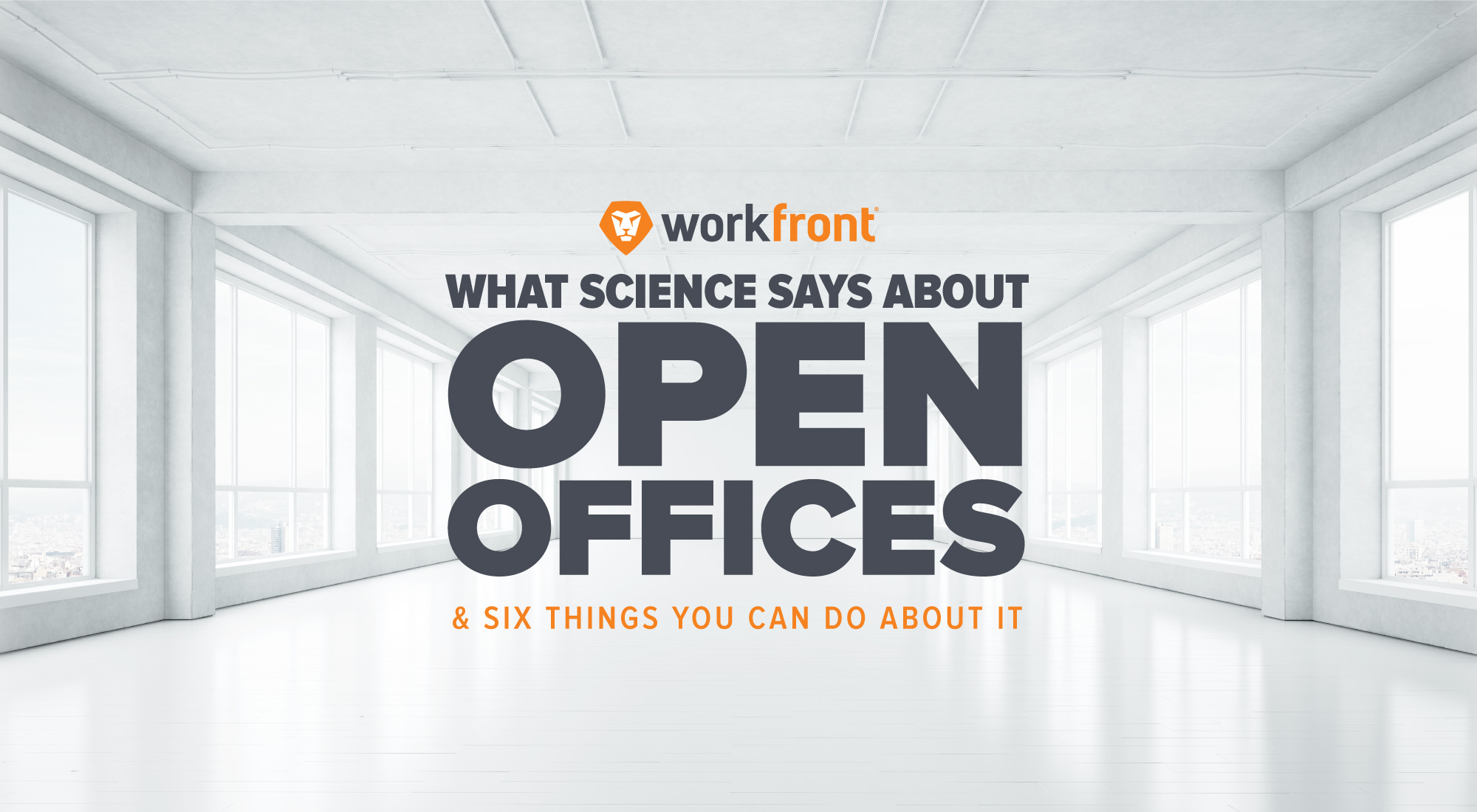 Sometimes it might seem like open offices are a recent invention — a newfangled idea from Silicon Valley.

In reality, they’ve been around since knowledge work has been around. Because open-office layouts have been around for so long, researchers have spent decades writing papers on the trend, exploring how open offices affect such things as productivity, cost, noise levels, interruptions, and more.

All this research is perhaps more relevant today than ever before, given the fact that around 70% of U.S. companies currently adopt some version of the open office (including the use of low-partition and high-partition cubicles), with around 15-20% adopting a completely open plan (where all desks and computers are set up in rows in a large single room).

So what have these researchers found?

On the whole, the results don’t bode well for the layout. While open offices have been shown to increase informal interactions between employees, be far less expensive (requiring as little as 3x less total office space), and help certain types of teams collaborate more effectively, they carry serious tradeoffs in terms of worker productivity.

Here's what the science says.

To start, a review of over 300 papers from 67 journals found that open office layouts “were found to be highly significant in affecting occupant productivity.” It added that “sound and acoustic strategies should be given high priority in office design to achieve a high degree of occupant productivity.” In a similar vein, another review of more than 100 studies on open offices found that the layout consistently led to lower rates of concentration and focus, and a third paper, which analyzed more than 50 surveys on open offices, found consistent complaints about noise and interruptions.

To get more specific, research from the University of California at Irvine found that “employees in cubicles receive 29% more interruptions than those in private offices.” It added that those who were frequently interrupted “report 9% higher rates of exhaustion.” Another survey of 38,000 knowledge workers “found that one of the biggest losses of productive time during the day stemmed from interruptions by colleagues.”

Likewise, research from Edward Brown, co-founder of the Cohen Brown Management Group, shows that “office workers at all levels lose three to five hours of productive time every day due to unwanted, unneeded, and unproductive interruptions.” Brown found that 93% of workers say they’re “often interrupted” at work. He adds that “68% of those interruptions coming from inside the organization” and says that “face-to-face interruptions account for one-third more interruptions than e-mail or phone calls.”

Similar results can be tracked over time when companies decide to switch from a private office to an open one. For instance, researchers at Lund University interviewed employees both before and a year after such a move, and they found that “employees' perception of health, work environment and performance decreased during a 12 month period following relocation.”

In addition, researchers from Karlstad University have found that the more workers were gathered into a single office space, the less satisfied they became, resulting in lower well-being. According to the study, this was in part because these workers felt it was harder to have a good dialogue with their colleagues (likely because everything they say would be overheard). Anne-Laure Fayard, a professor of management at the Polytechnic Institute of New York University, backs up this point, saying, “Many studies show that people have shorter and more superficial conversations in open offices because they’re self-conscious about being overheard.” Somewhat surprisingly, this means that open offices often end up hurting work relationships.

Finally, a study from the University of Sydney divided results by office type, including enclosed private, cubicles with high partitions, and no partitions. They found dramatic differences when it came to sound privacy, noise level, and overall satisfaction. Here are the specifics: 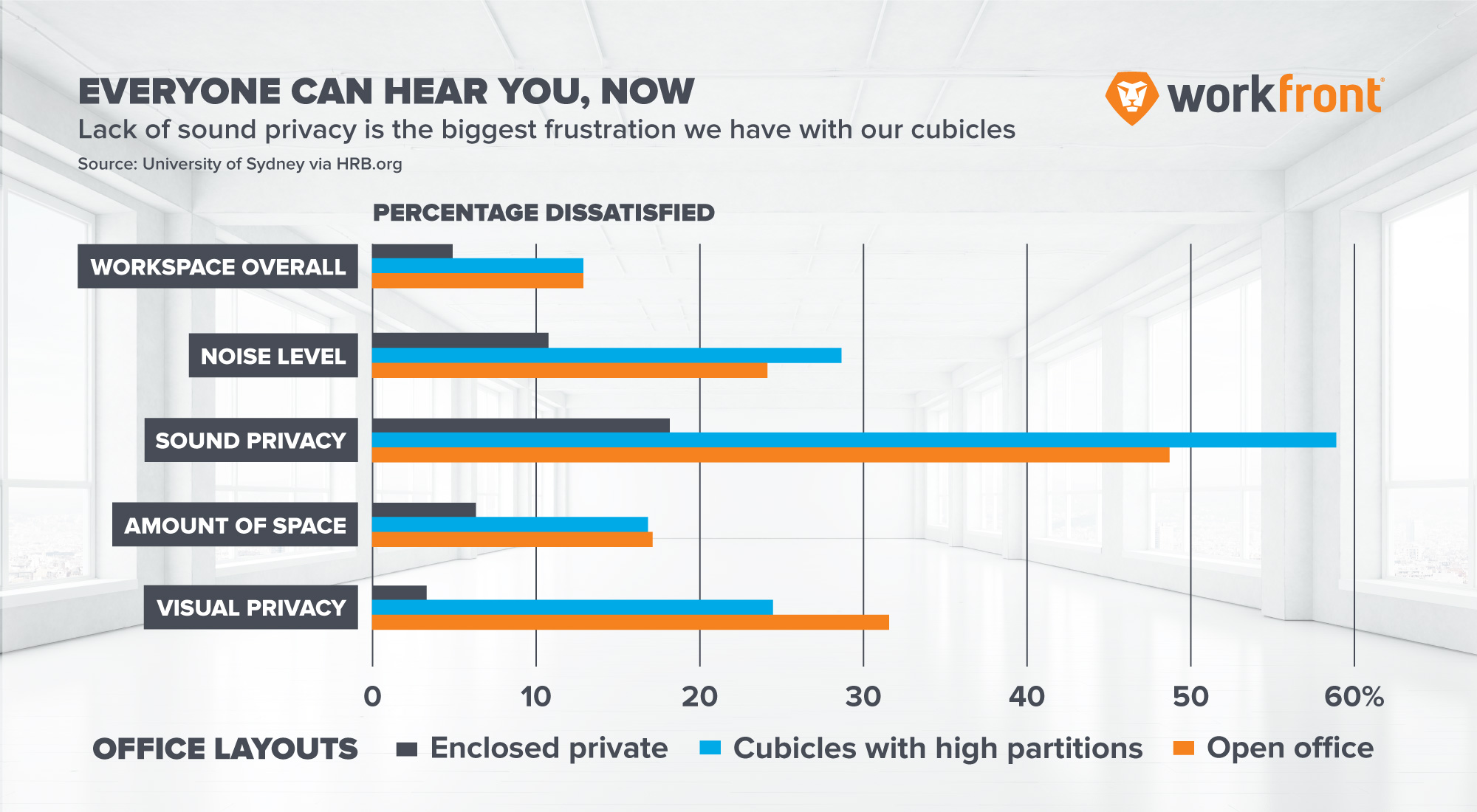 It’s clear that open offices come with a loss in productivity.

So how you can stay productive when your office space is working against you?

Here's what you can do.

This may seem like a counterintuitive first suggestion, but it’s worth noting from the outset that socializing is essential for effective work. In fact, the consulting agency Gensler places socializing among its four modes of knowledge work, which makes sense because good work ideas often stem from face-to-face interactions.

Socializing can also help with workplace well-being. Robin Dunbar, a professor of psychology, cites 148 epidemiological studies that found that the two biggest factors in whether someone would remain alive a year after a heart attack were whether they smoked and whether they were lonely. In addition, a study from the University of Michigan found that replacing face-to-face interaction with digital communication led to increased rates of depression. In short, socializing keeps you alive and happy — which in turn makes good work possible (especially the alive part).

So schedule time for socializing. You might mirror Steve Jobs, who famously liked to have walking meetings (an activity that has been shown by Stanford University to dramatically increase creativity). You might also follow the advice of Keith Ferrazzi to never eat alone, or even schedule 15 minutes at the same time every afternoon to take a break and intentionally catch up with coworkers.

However you do it, socializing can set you up to focus on deep work by helping you feel emotionally recharged and ready to go.

One of the best ways to focus is to deliberately schedule work periods day. To this end, the writer Chris Brogan advocates for an idea called time blocking, which consists of scheduling nine 20-minute segments, totaling three hours a day, every day. During this time, don’t do your menial tasks. Instead, focus on your most important goals — the ones that get put aside because of the tyranny of the urgent.

If you’re required to be in a lot of meetings or if you experience frequent interruptions, you might have to literally schedule focus periods into your digital calendar for it to happen. So work it into your day. Don’t let your calendar fill up with urgent tasks (including meetings) at the expense of the most essential tasks.

In-person interruptions are often directly tied to specific work tasks. Someone nearby has a question about a task you’re both working on, so they interrupt you to discuss it—even if you’re working on something else at the moment. These interruptions might not seem like a problem at first blush, but as we’ve seen from the research cited above, they can add up to enormous losses in productivity.

Work management software dramatically decreases in-office interruptions by logging all conversations about your work tasks directly in a single place. What’s more, unlike instant messaging apps, these tools don’t interrupt the work you’re doing now to focus instead on something else. Rather, work management software lets you see the conversation surrounding a specific task in the moment you’re working on that task. This reduces face-to-face and digital interruptions, making you more productive. As proof, after implementing a work management platform, AdRoll saw production increase 10% per person, per sprint—leading to large gains over time.

Herman Miller, a manufacturer for office furniture, has found that “sound masking can increase productivity by up to 38%, reduce stress by up to 27%, and increase job satisfaction by up to 174%.” White noise or pink noise speakers can produce “cones of silence” that enable workers to focus without hearing nearby conversations.

In a Harvard Business Review article titled “Why You Can Focus in a Coffee Shop but Not in Your Open Office,” David Burkus shows that the optimum level of noise for productivity happens to be right around 70 decibels (i.e., “a level of noise similar to background chatter in a coffee shop”). The key here is that the specifics of what people are saying shouldn’t be discernible; otherwise, your attention will almost certainly be pulled into the content of the conversations around you. So look for background noise—something you can tune out (like a favorite song on repeat, or ambient sound). You know you’ve found the right thing when 15-20 minutes go by and you forget you’re listening to it.

5. Get inventive and ask for change.

The bottom line is that if you’re not productive at work, you’re ultimately hurting yourself more than anyone else. So do whatever it takes to carve out time where you can focus.

You might have to schedule a small, seldom-used conference room to yourself for a few hours a day, find a quiet space nearby your office, or come into work an hour earlier or stay an hour later to get work done. On this front, a friend of mine used to drive to a local library for 2-3 hours every day to get his most essential tasks done.

If none of these ideas are possible, you might have to petition to change your work culture slightly. You might push to make remote work a common practice at your workplace (something Harvard Business Review has shown to increase productivity), freeing you up to have a day or two a week where you focus completely on tasks that require deep work. Or you might push your office to create a library room in your office (something Facebook does to good effect) where people can gather, free from conversation.

When you show your team members how much open offices impair productivity (possibly by showing them this article), they’ll hopefully be more willing to move toward a culture that embraces deep work.

In the end, the best answer is to embrace a flexible approach to work—one that gives employees the options they need to be most effective in their particular role. For most knowledge workers, this almost certainly means giving them the ability to focus for long periods of time when needed.

Ultimately, it’s a view that mirrors the position taken in a 1856 UK government report on office space layouts, which reads: “for the intellectual work, separate rooms are necessary so that a person who works with his head may not be interrupted; but for the more mechanical work, the working in concert of a number of clerks in the same room under proper superintendence, is the proper mode of meeting it.”

It turns out that at least in this regard, knowledge work hasn’t changed much at all.