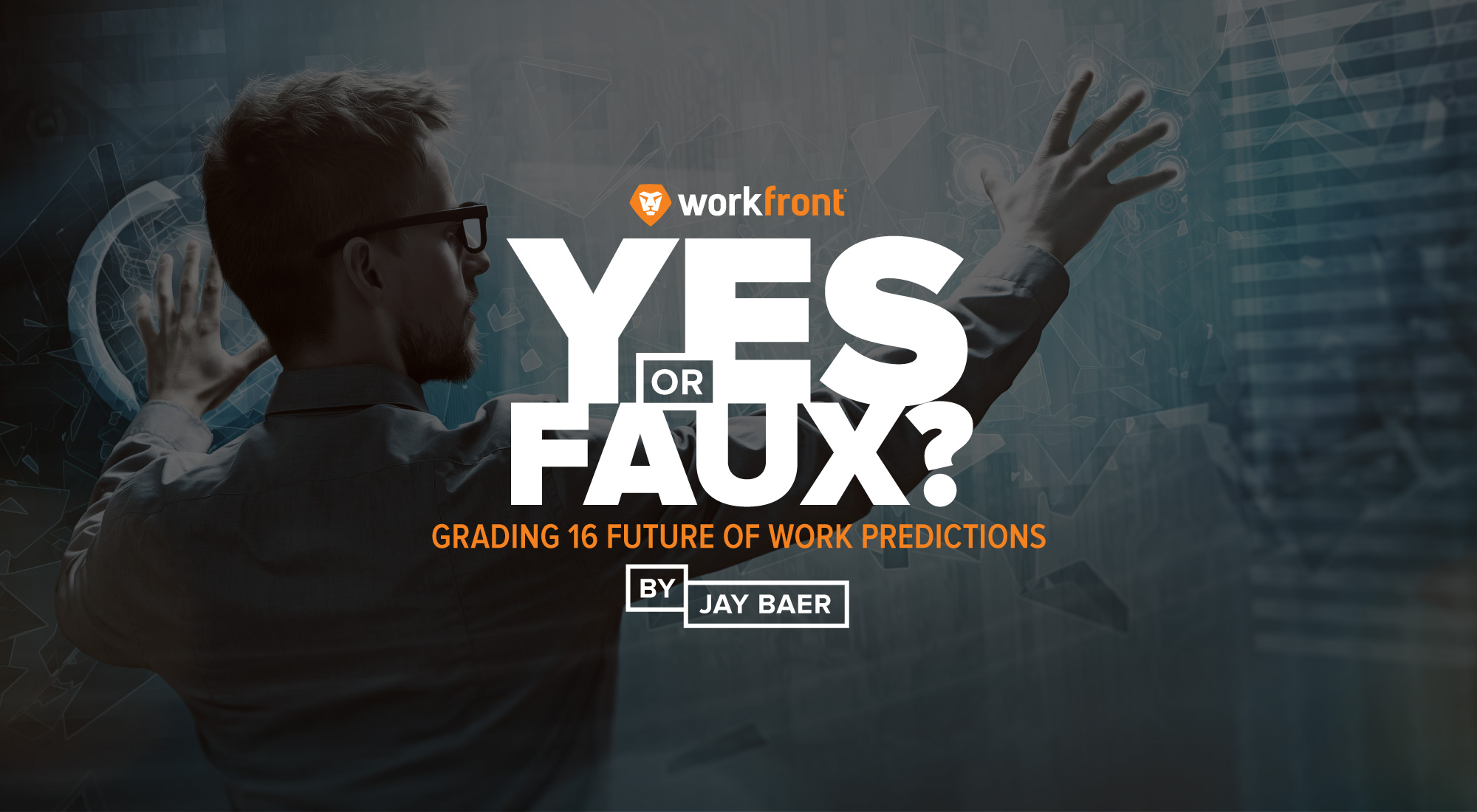 How we work, where we work, and when we work are changing. This is the conclusion of the 2017-2018 edition of the Workfront State of Enterprise Work Report, which surveyed 2,000 American knowledge workers employed at companies with 500 employees or more.

Some of these shifts pivot on increased opportunity for team members to work from home (the average worker does so eight hours per week) or utilize flextime (56% of survey respondents work on a non-traditional schedule at least monthly).

See our post "Fighting Forward: Three Ways to Prepare for the Future of Work" for tips on how you can make sure your team is ready for the future workplace.

Other shifts haven’t necessarily occurred yet, but are hoped for by great swaths of the American workforce.

In particular, the desire to minimize pointless meetings and tsunamis of email is nearly universal. Meetings and email are the two most often cited obstacles to getting work done, with more than half of all workers stating that these activities routinely get in the way of executing their actual job function. 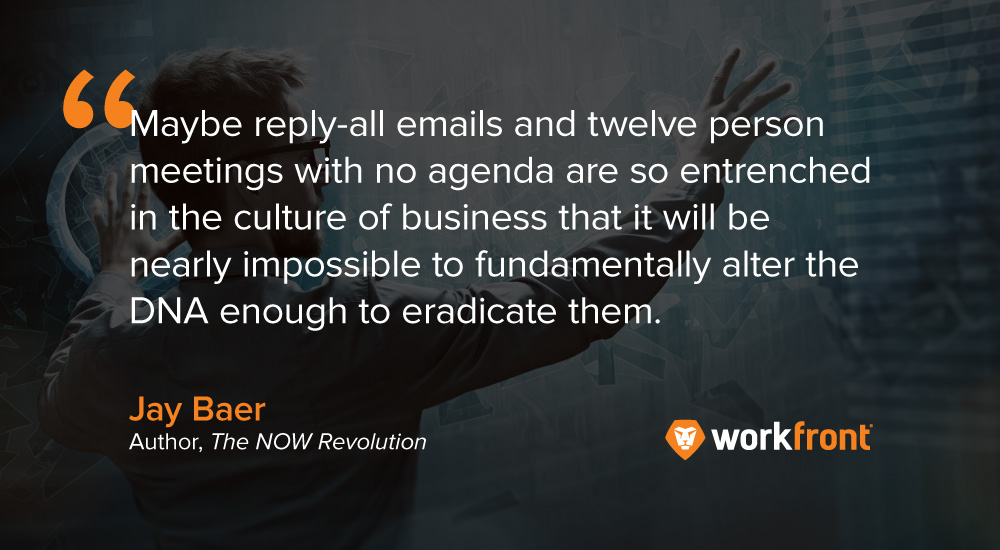 What’s fascinating, however, is that when research participants were asked to forecast where work is headed, and how work will be done in five years, their belief in the ability of companies to disrupt the hegemony of meetings and email wavers somewhat. And perhaps that’s a realistic view?

Maybe reply-all emails and 12-person meetings with no agenda are so entrenched in the culture of business that it will be nearly impossible to fundamentally alter the DNA enough to eradicate them.

How hopeful or hopeless ARE workers’ predictions about the future of work in America? Let’s take a look. In the State of Enterprise Work Report, Workfront asked participants to look ahead approximately five years and predict what will happen.

For each of the 16 predictions collated for the research, I have added some commentary of my own and have graded them on a scale of one to five Workfront lions.

One lion means I believe this prediction to be highly unlikely. Five lions mean I concur wholeheartedly. These are listed in order of the percentage of respondents indicating they believe the prediction will come true in approximately five years.

Nobody, not even corporate IT, is hoping to get more company email. In fact, the average American knowledge worker has 199 UNREAD emails in their inbox at any time. That’s not good.

I think this may happen, especially with more Millennials in management roles, but I’m also not sure rampant flextime and work from home schedules always yields the best possible productivity outcomes (and it certainly doesn’t without a system of record like Workfront).

I can see a scenario where the flextime trend pendulum swings back the other way.

This is happening, and fast. We use Zoom constantly in my company, and while we’ve been all virtual for nearly a decade, what’s interesting is that our large corporate clients are now on-board like they simply were not in prior years.

Over Half of Workers will be Remote – 53%

Certainly there will be teams within enterprise companies that are mostly or entirely remote.

But, I cannot see a scenario (certainly not within five years) where more than half of all enterprise work forces will work from home. That is millions and millions of people and would have massive impacts on housing, commercial real estate, transportation, (and dry cleaning)!

For intra-office communication, this is undoubtedly true. See points above about Workfront/Slack et al. and video conferencing. For communication from company to customers, email isn’t going away any time soon. But that’s an entirely different use case.

To some degree, this is already the case. For many of us, most of our job can be done on a phone, especially the larger screen phablets.

The big hold up on “phones” becoming laptop killers is that it’s nearly impossible to type at length on a phone without driving yourself insane. If we get another uptick in voice and dictation, or a legitimate AR keyboard that works virtually with your phone, then we’ll be all-in on mobile office.

Dress Codes will be More Relaxed – 49%

To me, it seems like this prediction must go somewhat in lockstep with the remote workforce. If you never have to come to the actual office, OF COURSE dress code will be more relaxed. In fact, it’s entirely possible I’m wearing only an Evel Knievel robe (my favorite) while I’m writing this for you right now.

Beyond the remote angle, however, I’m not certain this will happen.

Certainly, it stands to reason. But I can also see a reversal of trend where we determine that “if you’re in the office, you should look like you’re in the office.” Same thing could happen with how people dress on airplanes, which has gone from “tuxedo” to “mustard stained free T-shirt from Jiffy Lube” in about two decades.

Will collaboration software (like Workfront) reduce our need to get on the phone to talk through every, little thing? Yes, thankfully. But will that reduce MOST conference calls? No way.

Already, companies that use collaboration software—like me—still have conference calls with screen sharing so that team members can talk through their collaboration. Our ability to discuss synchronously still matters, and always will. 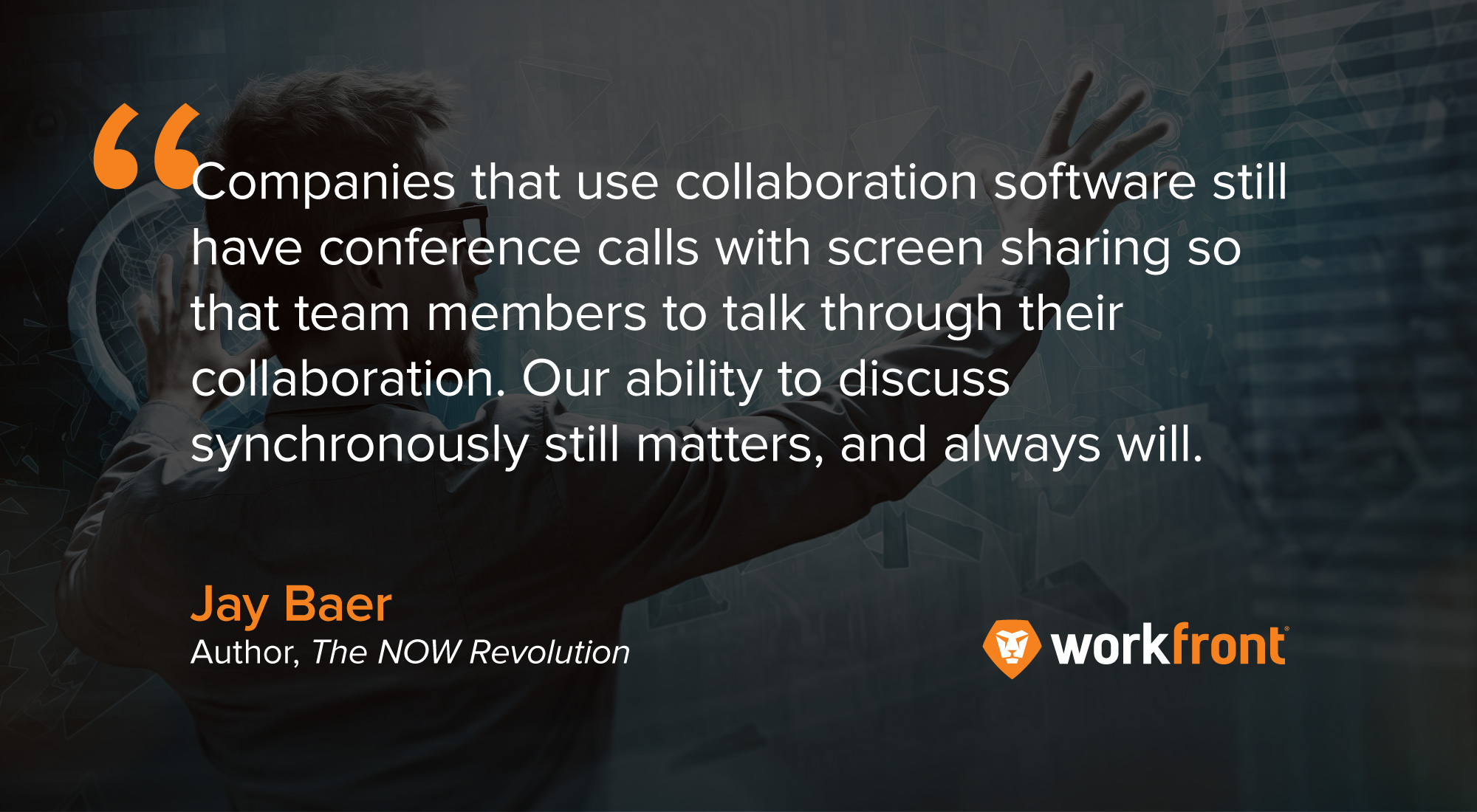 But insofar as we’re referring to internally facing tools, I think it’s unlikely unless Facebook for Business really takes root. Which could happen, but I think they have bigger fish to fry.

Assigned Desk Space will be a Thing of the Past – 28%

Another hard one to grade because for certain some companies will embrace this, and others already have. But from the perspective of “will this be mostly true across all American enterprise-scale companies?” I say “no way.”

The implications are too extreme and more and more studies are popping up showing that random workspace may not have the productivity and morale advantages previously assumed.

Printers will be Obsolete Because Everything will be Digital – 28%

I’m actually more bullish (lionish?) on this one than the respondents.

Now that we’re going digital on more and more legally binding documents, to do so on less critical paperwork is just a matter of time. Even now, when I actually print something I feel like I should cue an INXS track and watch an episode of Seinfeld.

Now, I’m not suggesting there will be ZERO printers. That’s crazy. I mean, every company still has a FAX MACHINE. Only Shirley in accounting knows how to use it, but it’s there, standing sentinel each evening. 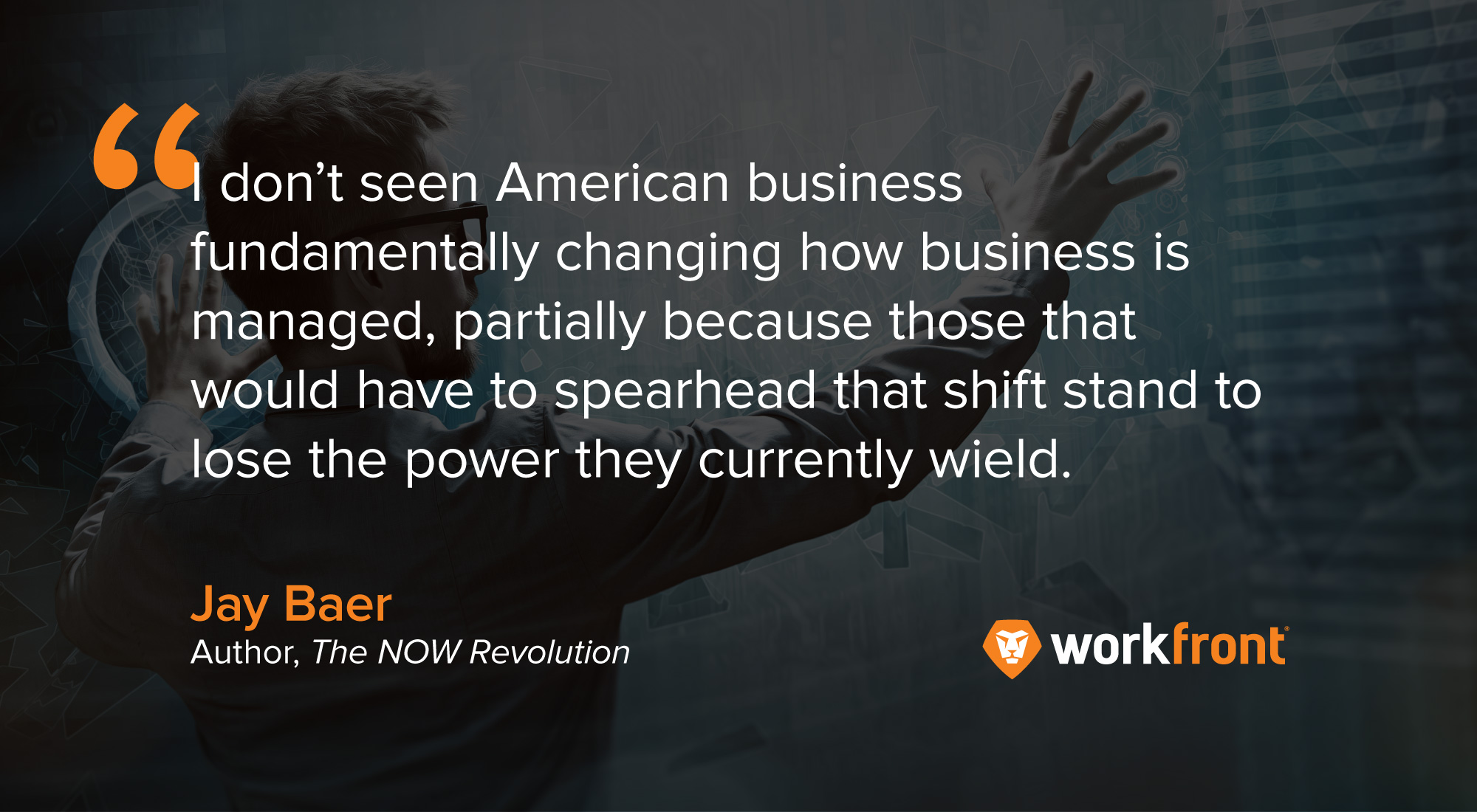 This experiment has already failed in a number of companies, and has rarely succeeded at enterprise scale (W.L. Gore & Associates being a notable exception).

I don’t see American businesses fundamentally changing how business is managed, partially because those that would have to spearhead that shift stand to lose the power they currently wield.

Daily and/or Weekly Status Meetings will no Longer Happen – 21%

Another instance where I’m more optimistic than most.

To me, daily or weekly status meetings are the refuge of the weak manager or a team that is poorly trained or under-empowered. Tell them what you want them to do, and let them do it. Especially if you have a system of record like Workfront, I see no reason why you’d need an all-hands session with this degree of frequency.

I rated this three lions however, because more and more companies may adopt a nimble system of work using the Scrum methodology rather than waterfall project management techniques. If so, I can see even MORE daily/weekly stand-ups, since those are a hallmark of the nimble method.

I think this could happen. Email is not going to entirely disappear internally, I don’t believe. But using email as a collaboration tool is so far away from being a good idea, I can see it falling out of favor for that purpose IF enough organizations adopt a viable alternative.

It seems like this is the opposite of the question above: "Assigned Desk Space will be a Thing of the Past." I am slightly more bullish on companies moving back to offices to facilitate more quiet and privacy/productivity among workers.

That said, I don’t think the real estate costs inherent in office-centric floor plans are likely to pencil out, so I doubt this comes to pass. The status quo of some open spaces, some flex spaces, and a few offices for leaders and execs seems likely to persist.

This is such a circumstantial scenario. Already, there are lots of companies where foul language is relatively okay. I suspect there are fewer of them at enterprise scale, however.

A lot of foul language is sexual in nature, or can be interpreted as such. So given the increased focus on sexual harassment and workplace conduct, I can’t see a situation where that kind of language usage is shrugged off in the near future.

But, five years is a long time, so there’s an outside chance this happens, given the overall coarsening of discourse in the country.

Those are the 16 predictions for the future of work, and how much I believe each of them are likely to actually occur. What do you think? And don’t forget to download the entire State of Enterprise Work Report from Workfront. It’s FULL of fascinating findings.

See "3 Things Knowledge Leaders Better be Doing Now to Reach the Future of Work Automation" for more advice on the future of work.