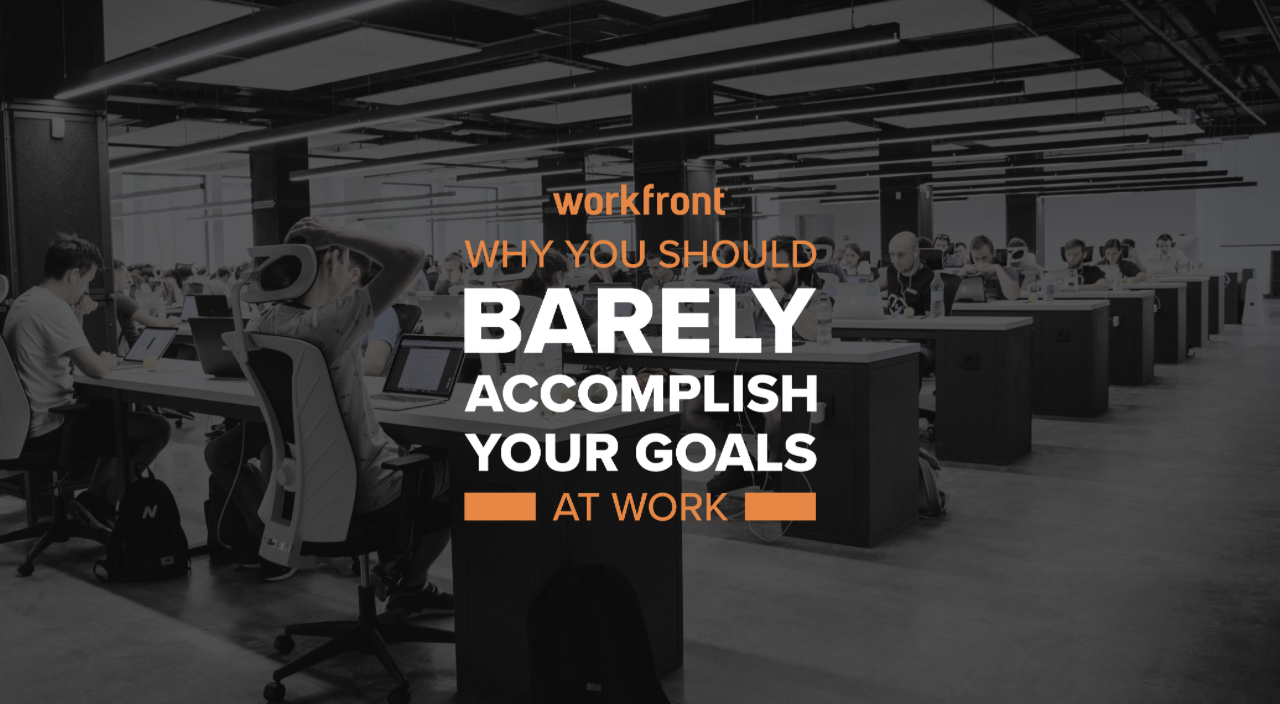 Why You Should Barely Accomplish Your Goals at Work

By Heather Hurst | Senior Director of Corporate Communications at Workfront

Okay, just breathe. I know there are some perfectionists out there who might be hyperventilating just a little bit at the thought of “barely accomplishing” things. I get it. I know and love plenty of card-carrying members of Overachievers Anonymous who can’t help going above and beyond, who believe in exceeding expectations every chance they get.

As for me, I’m no Leslie Knope. Trying to deliver A+ work in every single area of my life is a recipe for burnout, overwhelm, and eventual disaster. I’ve fully embraced the idea that a B+ or even B- effort is good enough for most tasks. Because when we give ourselves permission to do the bare minimum in some areas, we open up our energy for greater excellence in the areas that matter most.

The first time I heard researcher and author Brene Brown’s take on perfectionism, I remember thinking, “There’s nothing wrong with trying to be your best!” I thought of perfectionism as a personality trait—one that was generally quite useful. But then I encountered this definition:

“Perfectionism is not the same thing has striving to be your best. Perfectionism is the belief that if we live perfect, look perfect, and act perfect, we can minimize or avoid the pain of blame, judgment, and shame.”

Brown is right. What’s really driving us to give 110% of our effort 110% of the time to our work, families, and friends? It’s the illusion of being able to control the outcome, to control other people’s perceptions, and to avoid feelings of inadequacy. But it doesn’t work. “It’s a shield,” Brown says. “It’s a twenty-ton shield that we lug around thinking it will protect us when, in fact, it’s the thing that’s really preventing us from flight.”

Is there anything wrong with trying to do be your best? Not at all. Brown is careful to differentiate between what she calls “healthy striving,” which means to take genuine pleasure in trying to meet high standards, and toxic perfectionism, which is grounded in fear of disapproval and rejection.

For his book, Alex interviewed the British psychologist Tony Crabbe, who has found that perfectionism in the workplace is often a symptom of a lack of trust between coworkers and management. When team members are constantly second-guessing what will please their managers, they end up doing more work than is necessary to get the job done. “In the absence of trust, we overengineer to protect ourselves, and we drive towards perfection,” Crabbe says. “It takes a lot of courage to barely accomplish.”

For the perfectionists among us, it can take a lot of courage to turn in B- work. But it becomes easier if we understand that’s the expectation. Alex suggests setting clear milestones, encouraging your team to barely accomplish them, pausing to celebrate the completion of that phase of work, and then moving on to the next phase of your extraordinary goal.

Okay, pause here. You may think I’ve just introduced a contradiction. How can you achieve an extraordinary goal by putting in what sounds like a mediocre effort? It’s all about shaping the path—which for Alex involves setting extraordinary goals and then breaking them down into key initiatives, milestones, and best next actions (BNAs). With the path laid out clearly before you, you just have to relentlessly accomplish your BNAs, one after the other, putting forth the minimum viable effort. Again, the key word is “viable.” You don’t stop short of accomplishing the BNA, but you don’t want to over-engineer it either; that just slows down your momentum.

But for this concept to work, there needs to be plenty of transparency around processes, expectations, and deliverables, which is where work management software comes in. Online education leader Craftsy used Workfront to double their production capacity, from five new classes per week to ten. “We can track issues within projects which helps us to recognize patterns more quickly and make the changes necessary to keep moving forward,” says production supervisor Maggie Hart. “With Workfront, we definitely resolve issues faster.”

Momentum is a great thing—an essential thing—but it’s only one benefit that can come from downgrading perfectionism. When we barely accomplish most of our tasks, we can free up more energy for our most important and vital projects.

Obviously, you’d have no reason to be familiar with that last fact. It’s significant because it was observed by a man named Vilfredo Pareto, for whom the Pareto Principle was named. Also called “The Law of the Vital Few,” this principle describes a phenomenon that was first noticed in economics but that has since been observed in software, sports, and other fields. Joseph Moses Juran extended this unequal distribution principle to quality control, realizing that most defects in production are the result of a small percentage of the causes of all defects. Or, put another way, “you could massively improve the quality of a product by resolving a tiny fraction of the problems.”

The key is to distinguish “the trivial many” from “the vital few” in any human endeavor. In the workplace, most of our problems can be attributed to a small number of causes. And the vast majority of our successes come from a tiny fraction of our efforts. This is true even on this blog, where more than 80% of our web traffic comes from a handful of highly successful posts.

So does it make sense to put equal effort into perfecting and polishing every blog post we write? No. It’s strategically smarter to do an adequate job on most of our blog posts, but go all in on a small percentage of posts—by putting more effort into keyword research, the writing and shaping of the content, and promotion efforts. According to The Tao of Warren Buffett: “You only have to do a few things right in your life, so long as you don’t do too many things wrong.” That sure takes the pressure off, doesn’t it?

The Problem with To-Do Lists

“Unfortunately, most time management involves to-do lists,” writes Geoffrey James in Inc.com, “which tend to treat the 20 percent of your work that really matters as equal to the 80 percent of things that don’t.” Even when you prioritize according to importance, each item on that list takes up the same amount of space on the page. To-do lists almost force you to waste time on things that don’t really count, especially if you’re a “finisher” who has an obsessive need to cross off every item on your list.

James recommends adding a priority ranking to each item on your list, to help you determine what to do first—and whether some things are worth doing at all. Here’s how it works: for each item on your list, add one number (1-10) to indicate the effort that would be required and a second number (1-10) to indicate the potential positive results from that effort. Then you divide the effort by the result to get a priority ranking, as follows:

Task B: Write up notes from recent user group to share with team.
6 Effort / 2 Result = 3 Priority

The item with the lowest number moves to the top of your priority ranking. These low-effort, high-reward items should be checked off first. Then you work your way down the list. In my example, I’d focus on Task C, then Task A, then task B—and if I’m short on time, I might choose to cancel task B without an ounce of guilt.

After you go through this exercise a few times, it will become an intuitive way of thinking about your tasks. Just keep the principles in mind every time you look at your work queue. Not only will this help you determine what to focus on first, it also reveals when to “barely accomplish” a task (which is most of the time) and when to embody that 1980s Army slogan and Be All That You Can Be (which is relatively rarely).

Letting go of the perfectionist mindset is a process. It won’t happen all at once. But imagine the impact it would have if your team could A) correctly identify the trivial many from the vital few, and then B) barely accomplish the vast majority of your tasks. As Alex says, “When you’re 99 percent of the way there, all you need is an extra 1 percent to sign off a job as complete, not an extra 10 percent or more.” But for teams to feel that they have permission to just inch the ball into the endzone in this way, permission needs to be granted from the top down and expectations must be crystal clear.

Imagine the boss walking into your office and saying, “Congrats on doing a perfectly adequate job.” How would you take that? It kinda sounds like a sarcastic slam. But if the boss has communicated that barely accomplishing is the goal, these words could instead be a genuine compliment. Because when you do most of your work adequately, you can quickly and efficiently move on to bigger and better things, with energy and creativity to spare.